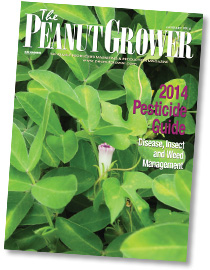 Area for harvest is expected to total 1.03 million acres, unchanged from September, but 36 percent lower than 2012. Based on conditions as of Nov. 1, the average yield for the United States is forecast at 3,787 pounds per acre, up 184 pounds from September but down 430 pounds from the record high set last year. Oklahoma is the only state expecting a record yield in 2013.

Groups Plead For Farm Bill Completion
Commodity groups throughout the United States have expressed support and appreciation in the continued efforts of members of the House and Senate Farm Bill Conference Committee to complete work on a comprehensive, multi-year Farm Bill.

A statement from the Southern Peanut Farmers Federation said, “We know the process of compromise is challenging and many of the differences in policy are deeply held, but it is imperative for the committee to make the tough decisions and complete work on legislation as soon as possible. It is necessary to our nation’s farmers and rural communities so they both have the certainty necessary to make long-term investments to remain competitive.”

“We have made great progress on the Farm Bill and continue to have productive meetings. There are still some outstanding issues that we are addressing. I am confident we’ll work through them and finish a Farm Bill in January. Concurrent with our ongoing discussions this week, I will file legislation to extend the current Farm Bill through January to allow us to finish our work without the threat that permanent law will be implemented. Having this option on the table is the responsible thing to do in light of our tight deadline.”

However, the Federation said that the Conference Committee had before them two pieces of legislation that have been years in development and subjected to rigorous independent analysis. “That analysis has consistently verified that the two bills show only relatively small differences in aggregate impacts on commodity markets. With these two bills, the foundation for compromise and agreement has been laid.

“Now is the time to provide U.S. agriculture with the stability of a multi-year Farm Bill and let the extraordinarily competitive energy of the sector once again seek opportunities that ultimately serve this nation with the safest, lowest cost and nutritional food supply that is the envy of the world. Now is the time for a new Farm Bill.”

Peanut farmers will have the opportunity to visit more than 90 agribusinesses and organizations in the peanut industry and can earn private and commercial pesticide applicators certification at the University of Georgia Peanut Production Seminar and industry-wide sponsored Peanut Seed Seminar.

Farm Show Chairman Rodney Dawson says, “I encourage farmers to attend this one-day show and conference because the information they will receive is an investment in their future.”

At the close of the day, more than $40,000 in prizes will have been presented to producers. Donors include Kelley Manufacturing Company and AMADAS Industries.

For more information on the show, contact the Georgia Peanut Commission office at 229-386-3470 or by emailing info@gapeanuts.com. Information is also available at www.gapeanuts.com.

This is the second year for the drive. Last year Santa Rosa County collected the most jars at 378. The Florida Peanut Producers Association will match this year’s collection up to 3,000 jars of peanut butter.

New USDA Contact On Peanut Program
USDA has announced that Kathy Sayers is the new National Peanut Price Support Program Specialist, making her the point of contact in USDA when it comes to market assistance loans and loan deficiency payments.

Sayers started working for the Farm Service Agency in Montague County, Texas, in 1987 as a program technician. In 1991, she accepted the position of Automation Coordinator for the Texas State Office and became Agricultural Program Specialist in the Commodity Compliance Division for the Texas state office in March 1997, with primary responsibilities being the peanut quota program and disaster programs.

After the dissolution of the quota system, she was the program specialist in charge of peanut price support, disaster programs and the Texas FSA point of contact for Risk Management Agency issues. She accepted the position of National Peanut Price Support Program Specialist in September 2013.

If you have questions about policy or procedure in these areas, contact Sayers at kathy.sayers@wdc.usda.gov or 979-680- 5155. As a cost-cutting measure, USDA is allowing program managers to stay in the states they have served so Sayers will remain in Texas.

AFG is owned by the Miller County Gin Company, Clover Leaf Gin and American Peanut Growers Group. The product is 14 percent crude protein, 3 percent crude fat and 43 percent crude fiber, ideal for wintering brood cows and herd bulls. The pellet is one-half inch in diameter and can be fed in bunks, portable feeders and on the ground.

AFG recently added a smaller-sized pellet, a high protein calf starter and pelletized peanut hulls. Cotton gins often paid lots of money to have the trash hauled away so it is a win-win making money on a byproduct.

TPPB, Peanut Proud Give Peanut Butter
The South Plains Food Bank hit the jackpot when they received over four tons of peanut butter last fall from the Texas Peanut Producers Board and Peanut Proud, a philanthropic arm in the peanut industry.

Shelly Nutt, executive director of TPPB, said food banks love peanut butter because of its high protein, but because of its cost, it does not get donated as much.

“Peanut butter is a powerhouse of nutrients, protein and vitamins,” Nutt said. “While it may cost more, the benefits far outweigh the additional cost.”

The donated peanut butter was used in the food bank’s Christmas boxes distributed in December.

CSP Applications Due Jan. 17
The U.S. Department of Agriculture’s Natural Resources Conservation Service (NRCS) is opening the Conservation Stewardship Program (CSP) for new enrollments for federal fiscal year 2014. Producers interested in participating in the program can submit applications to NRCS.

“Through the Conservation Stewardship Program, farmers, ranchers and forest landowners are going the extra mile to conserve our nation’s resources,” NRCS Chief Jason Weller said. “Through their conservation actions, they are ensuring that their operations are more productive and sustainable over the long run.”

Some popular enhancements used by farmers and ranchers include: