Peanuts and wheat are nutritional powerhouses but contain protein allergens that can be detrimental for some people. However, a Clemson University researcher believes that if he can target these proteins, he can breed for safer, low-allergenic varieties.

“Wheat and peanut are primary sources of energy and proteins, specifically to populations in the most populated areas of the world,” Sachin Rustgi told scientists during the recent online meeting of the American Society of Agronomy, the Crop Science Society of America and the Soil Science Society of America. “On the flip side, these crops are listed among the ‘Big 8’ major food allergens by the U.S. Food and Drug Administration.”

Rustgi and his colleagues are using plant breeding and genetic engineering to develop less allergenic varieties of peanuts and wheat. Their goal is to increase options for people with allergies to these foods. His research is conducted at Clemson’s Advanced Plant Technology Program housed at the Pee Dee Research and Education Center

“Our research primarily focuses on the development of genetic resources to breed safe crops for people experiencing these foodborne disorders,” said Rustgi, an assistant professor of molecular breeding for the Department of Plant and Environmental Sciences.

In addition to wheat and peanut, other foods listed in the Big 8 food allergens are milk, eggs, fish, shellfish, tree nuts and soy.

Wheat consumption can cause celiac disease, a gastrointestinal disease that could grow into an autoimmune disorder. For people with peanut allergies, eating peanuts can cause mild symptoms such as a runny nose, sneezing, or hives to severe symptoms such as shortness of breath, dizziness, or swelling of the tongue or lips.

Individuals with peanut allergies generally are allergic to tree nuts and legume lupin. The only effective therapy known for these foodborne disorders is strictly avoiding eating wheat and/or peanut, as well as products containing these foods.

“People with food allergies can try to avoid these foods, but accidental exposure to an allergen is possible,” he said.

During their wheat research, the researchers are focused on a group of proteins, called gluten. Glutens are proteins found in grains like wheat, rye and barley. When flour is mixed with water, gluten proteins give flour a glue-like consistency, making the dough elastic and giving bread the ability to rise when baked. Gluten also provides a chewy, satisfying texture.

The two main protein types in gluten are glutenins and gliadins. Glutenins are responsible for dough strength and elasticity. Gliadins are essential for giving bread the ability to rise and are believed to cause most of the negative health effects. Gluten-degrading enzymes, or glutenases, are needed to break down glutens in foods to make these foods easier for people to digest.

While many people like the taste and texture gluten gives food, this protein complex also causes celiac disease, which, if left unchecked, can lead to an autoimmune disorder. Other people may experience non-celiac wheat sensitivity with myriads of intestinal and extra intestinal symptoms.

Researchers have tried to breed varieties of wheat with lower gluten content. The challenge, in part, lies in the complicated nature of gluten genetics. The information needed to make gluten is embedded in the DNA in wheat cells. To complicate matters even more, gluten isn’t a single protein – it’s a group of many different proteins. The instructions cells need in order to make the individual gluten proteins are contained within different genes.

In wheat, these gluten genes are distributed throughout a cell’s DNA. Because so many portions of the DNA play a role in creating gluten, it is difficult for plant breeders to breed wheat varieties with lower gluten levels.

“When we started this research, a major question was if it would be possible to work on a characteristic controlled by so many genes,” Rustgi said. 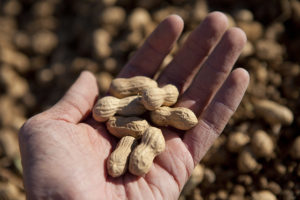 The situation is similar for peanuts. Peanuts contain 16 different proteins recognized as allergens.

“Not all peanut proteins are equally allergenic,” Rustgi said. “Four proteins trigger an allergic reaction in more than half of peanut-sensitive individuals.”

Just as the gluten genes in wheat, peanut allergen genes are spread throughout the peanut DNA.

“Targeting this many genes is not an easy task, even with current technology,” Rustgi said.

He and the research team are testing many varieties of wheat and peanuts to find ones that are naturally less allergenic than others. Their hope is these low-allergenic varieties can be bred with crop varieties that have desirable traits, such as high yields or pest resistance. The goal is to develop low-allergenic wheat that can be grown commercially.

Genes targeted by the CRISPR technology are changed or mutated. The cells can no longer “read” these genes and make the specific proteins.

“Disrupting the gluten genes in wheat could yield wheat varieties with significantly lower levels of gluten,” Rustgi said. “A similar approach would work in peanuts.”

The researchers also are studying to understanding how gluten production is regulated in wheat cells. As it turns out, one protein serves as a “master regulator” for many gluten genes. This is important because disrupting this master regulator could lead to reduced amounts of gluten in wheat. Targeting a single gene is much easier than trying to disrupt the several gluten genes.