Hot, dry weather is causing issues for South Carolina peanut production, and Clemson Extension peanut specialist Dan Anco warns farmers to be on the lookout for a host of diseases that could affect yields. 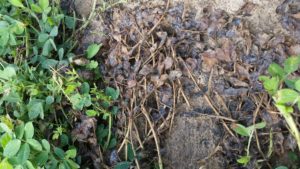 One disease is Aspergillus crown rot.

“This disease shows up as black sooty spores at the crown of dead plants,” Anco says. “It is difficult to treat once it is seen in a field. The best thing to do is plant good-quality treated seed.”

In-furrow products such as Abound (azoxystrobin) can help, but once dead plants are visible, it is too late to add an in-furrow product. The hot and dry conditions that encourage Aspergillus crown rot also promote the appearance of lesser cornstalk borers, a worm that can create openings where Aspergillus can enter plants.

Anco also warns against underground diseases, such as white mold. White mold damage may not be visible until peanuts are inverted, or pulled out of the ground and flipped, so they can dry. Using a 40- to 45-day application of the fungicide tebuconazole will help curb white mold growth. 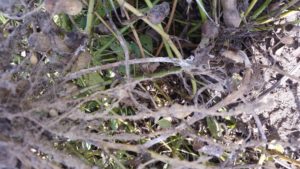 White mold damage may not be visible until peanuts are inverted, or pulled out of the ground and flipped so that they can dry.

Early leaf spot and late leaf spot have also been found in a few places but are not out of control.

“The dry weather earlier gave us some latitude with starting fungicide programs maybe a little later,” Anco says. “Maintaining protection and making sure we don’t get behind now will keep things manageable as we get further into the season.”

Growers also should look for burn injuries on their plants. Plant burn from the pesticide Thimet, also known as phorate burn, can show up as a variety of symptoms. These symptoms generally start at the tip of a leaf and can be chlorotic/yellow.

Several small round brown/black lesions at the tip of leaves are common. Thimet injury is more symmetrical and different leaflets are commonly affected at the same time. Symptoms can appear near the tips of leaves and can also have wedge or V-shaped appearances. The symmetry is caused by the different plants and leaflets being exposed to the phorate compound in the furrow at the same time.

“Thimet injury can at times look alarming, but it is nothing to worry about and is more of a sign that the Thimet is doing its job,” Anco said.

Thimet injury can look a little like hopperburn or leaf scorch. 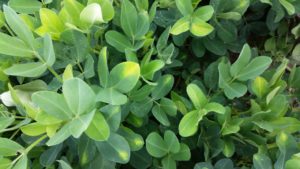 Hopperburn is the result of potato leafhoppers feeding on leaves and appears as yellow (no brown) and does not by itself produce lesions inside the chlorotic portion of the injury.

Hopperburn is the result of potato leafhoppers feeding on leaves and appears as yellow (no brown) and does not by itself produce lesions inside the chlorotic portion of the injury.

Treatment for hopperburn should begin when 15-20 percent of leaflets are affected. Hopperburn usually pops up around June or July and typically starts on field edges, but Anco says he has not seen it yet this year.

Leaf scorch disease commonly creates a small black lesion inside of the larger necrotic area on a leaf. This larger brown/necrotic spot of killed leaf tissue can take on a wedge shape. Anco said most fungicides regularly used for leaf spot control are likely also effective against leaf scorch.

The best window for planting peanuts in South Carolina is May 5-25. Optimal temperature for peanut growth and development is 86 degrees. Many diseases are driven in part by high soil temperatures. In addition, high temperatures can slow plant growth and drought stress reduces flower production and pollination.

Weather information from the Edisto Research and Education Center show the average high temperature for May was 88.8 degrees.

For more information about peanuts and other agronomic crops, visit www.clemson.edu/extension/agronomy/.