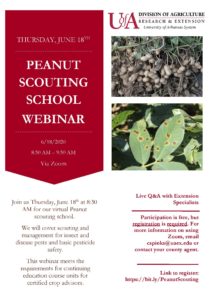 Once upon a time, the phrase “coming to a screen near you” meant a new cinematic feat was on its way, either in movie theaters or, more cozily, your living room.

Between the ongoing COVID-19 pandemic and the rise of online video teleconferencing platforms such as Zoom, the phrase often heralds one’s best bet at contact, period. If it’s not coming to a screen near you, it’s probably not coming near you at all.

Social distancing guidelines, along with the outright closure of many public and private institutions in March, complicated educational efforts at all levels.

For weekly staff meetings and verbal communication, this has been an easy enough transition for many. For other aspects of work and education, it has been a more challenging hurdle.

The University of Arkansas has long offered an annual crop scouting school in which agronomists and other Extension experts discuss techniques for identifying and controlling pest and disease pressures in various crops, including soybeans, rice, cotton, corn and peanuts.

As the Arkansas planting season gave way to the summer growing season, those experts knew 2020 would require a different approach.

Glenn Studebaker, Extension entomologist for the university’s Division of Agriculture, said the course has historically been a six- to eight-hour affair, spent mostly in a large conference room.

“Obviously, that’s not going to fly in an online webinar,” Studebaker said with a laugh. “You might keep someone for two hours, or three, tops. In a classroom setting, most folks don’t want to be seen leaving. Online, they’ll just … vanish.”

Instead, Studebaker has taken on the role of moderator for four separate scouting schools, one for each of four major crops, over the past month. The most recent, the soybean scouting school, streamed this week. The next, focusing on peanuts, is scheduled or June 18.

Studebaker said there have been a handful of challenges to which the various presenters have had to adjust.

“The most time-consuming part was prerecording the presentations,” he said. “We play them during the webinar, and then we’re there, live, to answer questions as they arise.”

Studebaker said some presenters struggled to meet agreed-upon tie constraints, so that the overall webinar would conclude when expected.

Live, just not in person

“The other thing is that we’re all used to presenting in front of a live audience, which gives you feedback as you talk — you can see their faces, read their body language,” he said. “When you’re just talking to a camera lens, you don’t know how people are reacting until they start typing in their questions.”

Within the video teleconference platform, viewers can submit questions to the moderator via chat — anonymously, if they so choose. Studebaker said that while most of the questions he has received weren’t out of the ordinary for scouting school, he said the anonymity freed some users to ask more basic questions that they might otherwise be embarrassed to pursue in a typical classroom setting.

He also said that while there is currently no limit to the number of attendees who may register for the schools, greater attendance makes it less likely that he or the presenters will be able to answer all of the questions asked during the webinar itself.

“If we can’t get to a question during the webinar itself, we do our best to follow up by phone or email,” Studebaker said.

He said the webinar format has yielded at least two additional benefits for farmers, researchers and others. The first is that it has made the presentations more geographically accessible — the schools have been attended by farmers and Extension agents from other states (some of whom, Studebaker said, are primarily interested in seeing how well the online format works, potentially in the interest of adopting it in their respective states), as well as by viewers as distant as Australia.

The second is that the schools have revealed an “overwhelming” interest in seeing the presentations recorded and kept available as an online resource for future viewing. The Cooperative Extension Service is currently developing an online library.

The final virtual scouting school for the 2020 season will focus on peanuts. It will stream Thursday, June 18, at 8:30 a.m. CDT To register, visit https://bit.ly/PeanutScouting.

Ryan McGeeney is a University of Arkansas communications specialist. He may be reached at rmcgeeney@uaex.edu.