Sorry soil and tight margins a perfect ‘in’ for Arkansas peanuts 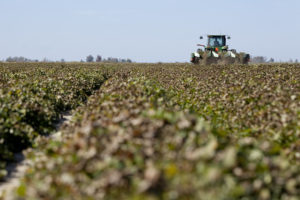 As 2020 peanut prices gradually catch up to those offered in 2019, the popular legume, now planted on an estimated 35,000-36,000 acres across the state, continues to look like an increasingly good bet for growers with soil beset by southern root knot nematodes or low nutrient values — photo courtesy University of Arkansas

As 2020 peanut prices gradually catch up to those offered in 2019, the popular legume, now planted on an estimated 35,000-36,000 acres across Arkansas, continues to look like an increasingly good bet for growers with soil beset by southern root knot nematodes or low nutrient values.

“The real draw for a lot of peanut farmers here is you grow it on your sorriest ground,” Vangilder said. “Not everywhere — in Marianna, for example, they grow it on some of their really good cotton dirt, and they make really good yields. But up in Mississippi and Craighead counties, and even in Clay County this year, we put it on our really sorry, sandier, southern root knot nematode-infested ground, because the peanut isn’t affected by that pest.”

Peanut acreage in Arkansas has fluctuated over the past decade, dipping from about 18,000 acres in 2012 to about 10,000 acres in 2014, then steadily climbing since. In Arkansas, the leading peanut counties include Mississippi and Craighead counties, with smaller acreages in Greene, Lee, St. Francis and other counties in the Delta.

During the week ending June 27, growers sold approximately 82.4 tons of peanuts, nearly all of which were “runner-type” peanuts — the kind most commonly grown in Arkansas and elsewhere.

“Peanuts are one of our most profitable crops right now” in terms of input-to-cash receipts, Vangilder said. “The inputs are not quite as high as other crops, and the profit margin is probably better than any of them, depending on your yield.”

Scott Stiles, Extension economist for the Division of Agriculture, said peanuts offer attractive margins for growers who can take advantage of them.

Fixed costs are associated with equipment and machinery — peanuts require some very crop-specific machines, including diggers, combines and “fluffers,” which lift the dug peanuts off the ground for drying — in addition to irrigation wells.

“Consumer demand has been strong for products like peanut butter due to more stay-at-home eating,” he said. “The USDA is forecasting a 2.5% increase in domestic food use of peanuts in the current marketing year.”

Of course, the value of a crop is measured in more than just its own profitability — it has to be considered in the context of competing crops. And while peanuts are a strong competitor in that context, they have the added benefit of restoring soil through nutrient deposits, and also by way of starving off pest populations, particularly the southern root knot nematode, which often bedevils cotton crops but is a non-issue to peanuts.

“If you have ground that’s really infested with root knot that doesn’t produce other crops well, you can put a crop of peanuts in there, and they’ll grow really well,” Vangilder said. “Then you can come back with soybeans, cotton or corn. Our cotton producers typically see a 100 to 200 pound lint increase per acre by doing this.”

No matter how well the growing season goes, any crop can ultimately be fouled by bad harvest conditions, and peanuts are no exception. Because harvesting the legumes is a two-step process, involving both digging them from the ground, then later collecting them once they’ve dried out, they are particularly vulnerable to wet weather.

“Bad weather can be very detrimental to peanuts in harvest,” Vangilder said. “When it’s wet, it’s a problem, getting peanuts out of the ground. You can’t dig them out, and you can’t run them through a combine.

“It’s a profitable crop, but it’s a higher-risk crop,” he said.

Ryan McGeeney is a content specialist with the University of Arkansas. He may be reached at rmcgeeney@uaex.edu.