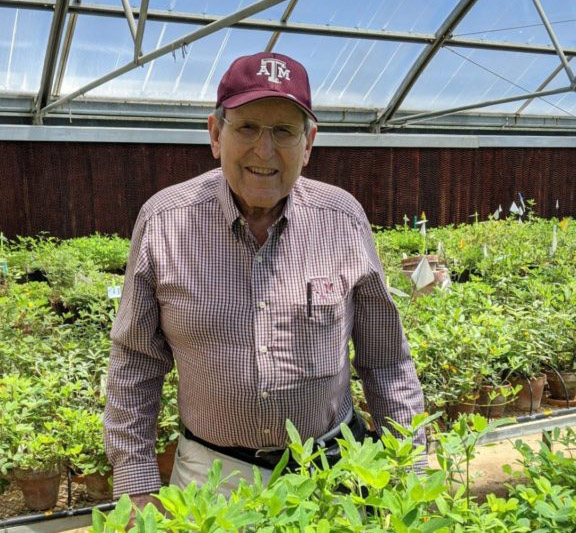 For 54 years, Dr. Charles Simpson, has been making a difference in the peanut products America eats — and on July 1, he was honored by the American Peanut Council with the 2021 Lifetime Achievement Award at the USA Peanut Congress in New Orleans.

Simpson, a professor emeritus in the Texas A&M College of Agriculture and Life Sciences Department of Soil and Crop Sciences plant breeding program, retired in 2003 but still maintains an extensive germplasm collection at the Texas A&M AgriLife Research and Extension Center at Stephenville.

“This award is the most prestigious honor in the industry,” said Shelly Nutt, executive director and leadership in the Texas Peanut Producers Board, who nominated Simpson. “Dr. Simpson has been recognized internationally for his efforts in collection preservation, maintenance, distribution and use of wild and exotic germplasm.

“Still today, he remains one of the leading experts in wild species peanuts and his accomplishments have opened the possibility of using the vast reservoir of genes in wild peanuts to improve cultivated peanuts,” Nutt said in her nomination.

“Dr. Simpson is a treasure of knowledge for the industry and very deserving of this award,” McCutchen said. “Even almost 20 years after his retirement, he actively remains involved in maintaining the collection here, making him the foremost authority in the U.S. with respect to collection, evaluation and preservation of genetic resources of peanuts.”

The Texas Peanut Producers board has pledged funds to the Charles Simpson Endowment for the AgriLife Research peanut collection, one of the largest, most diverse collections worldwide, and can no longer be replicated, McCutchen said.

A lifetime dedicated to peanuts

Simpson has spent more than 50 years serving the peanut industry as a breeder, successfully transferring at minimum seven different disease resistances as well as high oil content into over 23 cultivars and an additional seven germplasm releases.

One of his major accomplishments over his long career occurred when his program released the first root-knot nematode-resistant peanut cultivar created from a wild species peanut introgression. He introduced resistance genes from wild species collected in east-central Bolivia in 1980 to address root-knot nematode, a serious threat to peanut production in parts of Texas.

He released COAN, the first root-knot resistant peanut cultivar in the world, as well as Webb, the first high oleic nematode-resistant peanut released by the AgriLife Research program. The gene introgression for nematode resistance was made from a complex hybrid involving three wild species peanuts.

But Simpson might be most renowned in peanut breeding circles for his lifelong passion for collecting and preserving wild and cultivated Arachis germplasm. His extensive germplasm-gathering forays have included trips to Argentina, Brazil, Bolivia, Ecuador, Paraguay, Peru and Uruguay.

In 1980, Simpson assumed the role as co-leader of the Arachis — flowering plants in the pea family — germplasm project and traveled annually until 2004. His desire to collect and preserve the peanut species carried him to remote and inaccessible areas of South America on more than 28 collection expeditions, his nomination stated.

His work was funded by the International Board for Plant Genetic Resources, a part of the Food and Agriculture Organization of the United Nations in Rome, Italy. Through his collection trips, Simpson and his colleagues collected over 1,800 wild peanut accessions, over 5,500 cultivated landraces and over 500 Rhizomatous accessions.

Today, his research continues to influence. In a recent U.S. Department of Agriculture’s National Institute of Food and Agriculture grant, Plant Breeding Partnerships: Genomics-Assisted Introgression and Molecular Dissection of Resistance to Pests and Diseases in Peanut, the breeding team will transfer novel wild species alleles from a population developed by Simpson into a set of back-crossed breeding lines sharing a common, popular genetic background. Each possesses a small segment of chromosomal DNA inherited from the wild species parents.

Simpson has been author or co-author on 22 species descriptions and was a leader in translating the peanut monograph describing 69 of the 81 wild species into English. In addition, he was co-editor of subsequent supplemental publications with new species descriptions.

“I am deeply grateful for this recognition of the work I have loved doing for the past 53 years,” Simpson said. “There are no plans on my part to stop doing the work to aid the younger generation in utilizing the valuable plant collection we have assembled. The collection will be the lifeblood of peanut improvement for many years into the future.”

Kay Ledbetter is an associate editor/senior writer/media relations specialist for Texas A&M AgriLife. She may be reached at skledbetter@ag.tamu.edu.