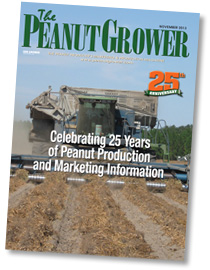 How hard work and determination turn a startup into a success.
By Craig Kvien

The failure rate is high, competing products are tough and you put a fair amount of money on the table before you have the first issue out. Yet Cathy Andrews, who started new publications for Venture Economics, Inc., saw a need for peanut growers she thought she could fill.

Cathy engaged Frank McGill, Ron Henning, Tyron Spearman, John Beasley, Foy Mills, Charles Coker, Martyn Woolf, Bob Hunnicutt, the leaders of all the grower associations, the university peanut Extension specialists and many others in a series of discussions that led to the formation of the magazine.

She also drew on her friends Norman Fast and Lindsay Jones from Venture Economics, and her friend, Clark, a talented IT professional.

Startups Are Tough
Everyone who has tried one will tell you that; yet, startups are rewarding if successful, and Cathy had a record of success. So, along with Cathy’s savings, her mother, Kate, helped by betting a portion of her farm on this startup and by providing sound and supportive business advice.

Tyron Spearman, one of the first people Cathy approached, was already producing a grower newsletter. Tyron agreed to help start the magazine, investing as a co-owner and serving as Executive Editor. Debbie Vance (now Debbie Gibbs) and Janet Owens also joined the team – Debbie to manage sales and marketing and Janet, circulation.

Run Over By A Train
That’s how the team would feel on some particularly challenging days. But that was appropriate, as their office suite was in a converted train depot just feet away from the tracks. Yet, there were many more successful days that kept the balance positive.

The one year anniversary issue in April 1990 was 64 pages, and 27 companies purchased ad space to help sponsor the issue. This issue was mailed to over 28,000 peanut growers and several thousand copies were mailed to other industry members.

Although it would be another year before Cathy drew a salary and decreased her workday to something less than 18 hours, The Peanut Grower magazine team had a successful launch.

The Future Was Bright
In 1991, The Peanut Grower became part of the Vance Publishing Corporation; Sonia Tighe added strength to the team as the Publishing Director.

In 1999, Amanda Huber joined the team as editor. In 2005, Peanut Grower became part of One Grower publications, owned by Mike Lamensdorf, a diversified producer who lives in Mississippi, and Lia Guthrie, who had previously been associate publisher of Cotton Farming and national accounts manager for Vance Publishing, became vice president and publisher. The most recent addition is just this year with Scott Emerson coming on board as sales manager. Over the years, there have been many, many contributing writers from the peanut industry.

Success Is Usually Hard Won
A grower near Camilla, Ga., whose family has started many successful ventures on their farm, reminded me that failure has few friends, but success many. He recounted how many of their successes did not start out looking like the best decisions they ever made. Yet they believed in the idea, pulled together, worked hard to improve it and ultimately succeeded.

Cathy was indeed an innovator and a committed leader who insisted on excellence and a high standard of quality.

By 1998, Cathy had met and married Craig Kvien and they had two daughters, Amy and Allison. She was a volunteer in the Tift County School System and served on the Board of the Tift County Foundation for Educational Excellence. Her volunteerism in the schools where her children at tended became more and more important to her, and she finally decided to step away from serving as Editor of The Peanut Grower.

It seems like yesterday when I interviewed for the position. Once I had been hired, I traveled to Tifton and spent a week learning from Cathy what all I could expect as the editor of Peanut Grower. She had a lot of good advice, but there was much I had to learn on my own as well.

I remember how excited she was to be starting a new chapter in her life and to be working in the education system where she could have a direct impact on her children. In fact, she mostly talked about Craig and her girls because thats where her passion was. She had made Peanut Grower a success and it was time to move on.

Even though I did not create this magazine, I have always tried to care for it and put forth the effort to vide the same type quality information that Cathy did.