Consider Scouting Your Peanuts In 2016 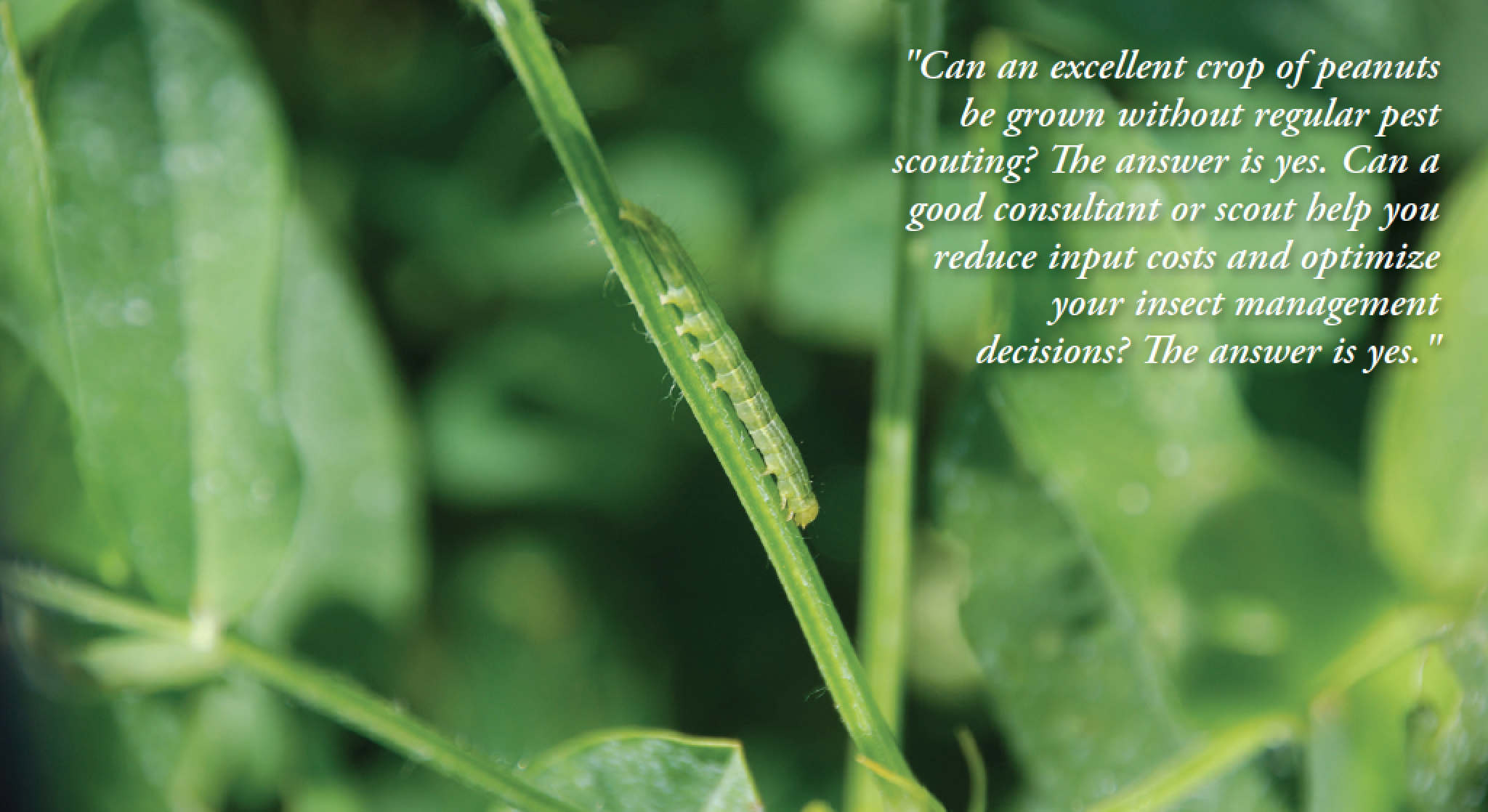 Insect and mite pressure in peanut can vary dramatically from year to year and even from field to field within a year. Each growing season brings with it new challenges; growers in the Southeast will not soon forget the lesser cornstalk borer and two spotted spider mite outbreaks that accompanied hot, dry weather conditions in 2014.

For the majority of peanut producers, increased rainfall in 2015 kept these two pests mostly in check. Nevertheless, insects were far from scarce in peanut fields in 2015. Foliage-feeding caterpillars arrived early in the season and remained until harvest in many areas. There is no way to predict what will happen in 2016, but the best way to stay on top of pest activity in your fields is to hire a good scout.

The Need For Timely Reporting

The potential economic downside of making a pest management mistake in peanut is probably higher than it has ever been. Profit margins are narrower, insecticides are generally more selective and more expensive, and insecticide resistance has become a concern for several pests. The days when a cheap, broad-spectrum insecticide tankmixed with a fungicide would solve most of your insect problems are gone. An accurate and timely scouting report allows growers to choose the optimum pest management tool in terms of efficacy and cost and apply it at the appropriate timing.

In the end, the decision of whether or not to hire a consultant or scout will rest with the individual producer and should be based on potential return on investment. Can an excellent crop of peanuts be grown without regular pest scouting? The answer is yes. Can a good consultant or scout help you reduce input costs and optimize your insect management decisions? The answer is yes.

Consider the situation in 2015 when foliage-feeding caterpillars were abundant in peanut across much of the Southeast. A complex of several caterpillar species was present in a lot of fields, and yet some fields had few to no caterpillars. There is no doubt that fields with sub-threshold levels of caterpillars were treated with insecticide because “everyone else” was spraying peanuts for worms.

The choice of which insecticide to use can be as important as the decision to spray or not to spray. Some species, like velvetbean caterpillar, can be controlled less expensively while others, like soybean looper, require the use of more expensive options. Failing to use the most appropriate insecticide will at least increase input costs and could result in control failure, yield loss and the need for a second application.

As you prepare for the upcoming growing season, consider the cost and potential benefits of scouting your peanut crop in 2016. Adding a scout as a component in your pest management strategy may not pay huge dividends every year, but over time it is likely to make you a more efficient and profitable peanut grower. Southern corn rootworms are most often found on heavy soils that are poorly drained. During extremely wet weather, they may become a problem even on sandy soils. This pest is a subterranean feeder. It may feed on the roots of peanut plants to some extent, but its most important damage is due to peg and pod feeding. Usually the holes cut into pegs and pods will appear as if they were created by a tiny drill bit. In contrast to lesser cornstalk borer feeding, there is no webbing associated with this pest. Fall armyworms are one of several foliage feeders that may attack peanuts. In some years, they can be the predominant foliage feeder. Caterpillars, gray, light brown or mottled green in color, reach approximately 1½ inches in length when fully grown and have a prominant inverted “Y” on their head. When abundant, fall armyworms can strip plants of foliage and “march” to other host plants. Female moths lay egg masses of about 150 each and cover them with scales from their body. Burrower bugs can be hard to identify in the field and an infestation is often not detected until harvest. Burrower bugs have a black-tobrown body, small red eyes on a small-sized head. The upper wings of burrower bugs are shiny and semi-hardened with the membranous tip overlapping. Its legs are spiny, and needle-like, piercing, sucking mouth parts are visible with a hand lens. Burrower bug is closely related to stink bugs.

Three-cornered alfalfa hoppers are light green and wedgeshaped. They stand about ¼ inch high and are about ¼ inch long. Both adults and nymphs have piercing mouthparts and feed by penetrating the stem and sucking plant juices. They tend to feed in a circular fashion around a stem, making feeding punctures as they go. The damaged area typically swells and above ground root growth may occur. On peanuts, feeding may occur on limbs, leaf petioles or pegs.