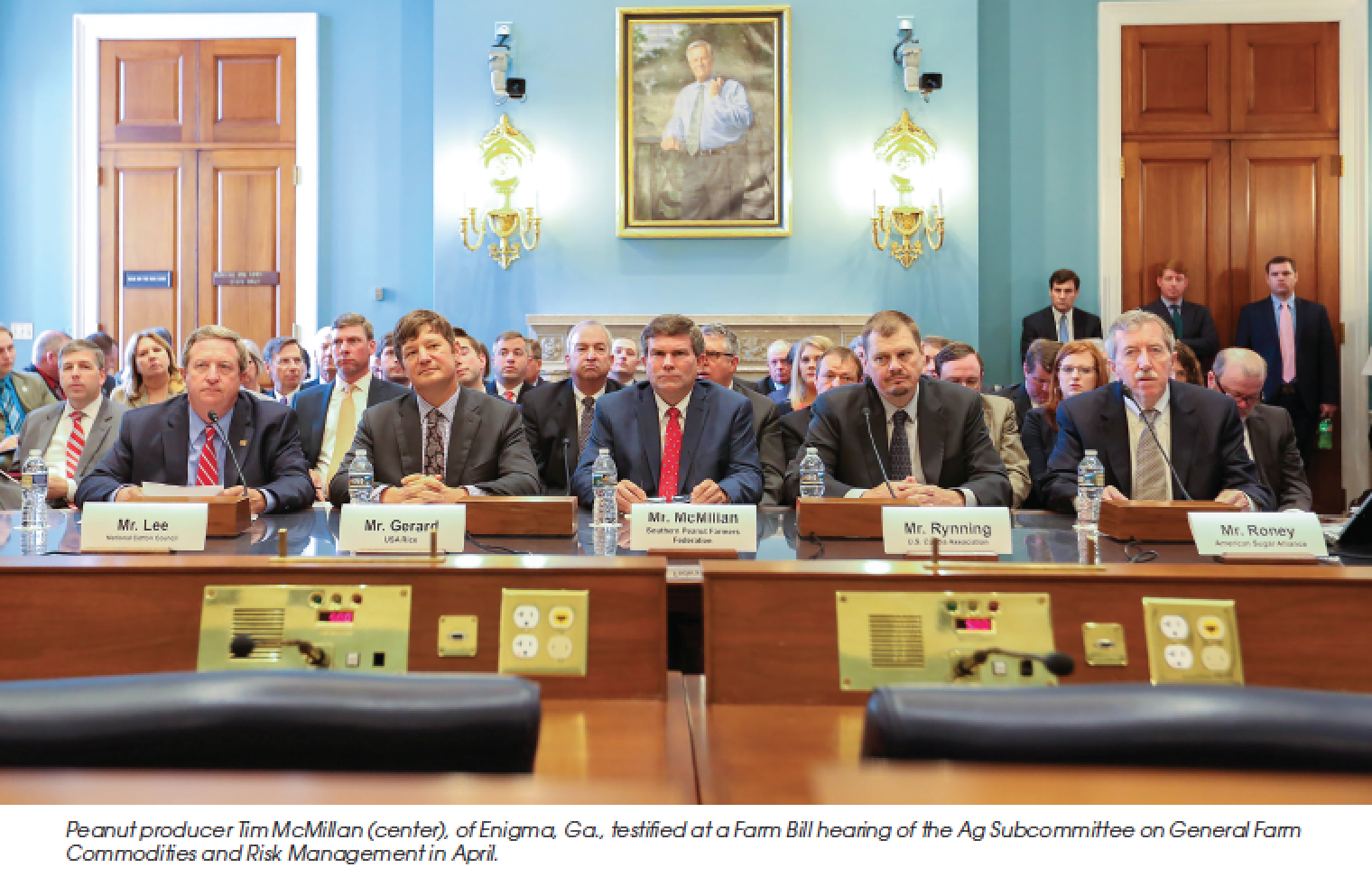 Georgia producer Tim McMillan testified about the PLC program and the effect of generic base.

Hearing and listening sessions taking place both in Washington D.C. and around the country over the next several months will be an important part of gathering ideas says U.S. House of Representatives Ag Committee Chairman Mike Conaway and will help ensure that they know producers’ needs when writing the next Farm Bill.

“If you’re on a policy committee for cotton or peanuts, or whatever commodity you are representing, be sure you have your thoughts and ideas on the next Farm Bill to us as soon as possible so that the committee will have what it needs when it is time to craft legislation,” he says.

With that appeal in mind, peanut producer Tim McMillan, of Enigma, Ga., gave testimony on behalf of the Southern Peanut Farmers Federation at a Farm Bill hearing titled “The Next Farm Bill: Commodity Policy Part II,” by the Agriculture Subcommittee on General Farm Commodities and Risk Management, which was held April 4, 2017, in Washington D.C.

McMillan spoke in support of maintaining the peanut provisions of the 2014 Farm Bill and the Price Loss Coverage (PLC) program in the next Farm Bill.

McMillan said, “If the PLC program had not been in place, I am afraid many farms in the Southeast would no longer exist because of the downturn in the farm economy, which has plagued us the past three years.”

According to McMillan, the Federation supports maintaining the current PLC program in the 2014 Farm Bill including the current reference price for peanuts, a separate peanut payment limit and storage and handling provisions. In his testimony, McMillan pointed out that the 2014 Farm Bill was drafted during a period of high prices on the farm. “When we compare average prices in 2011-12 to 2016 prices, we see a 30 percent decline in peanut prices,” he says. “I see the real impact of these numbers in the faces of my neighbors and hear it in discussions with lenders and our suppliers.”

The PLC program has worked for peanuts, McMillan added, but peanuts are not sufficient to carry an entire farming operation. “In a time when corn and cotton prices have been depressed and with the lack of a cotton PLC program, more pressure has been placed on farmers to plant peanuts by lenders,” McMillan said.

Growth Keeping Up With Supply

Currently, demand of peanuts has kept pace with the supply of peanuts. U.S. per-capita peanut consumption increased 12 percent from 2012 to 2016. The peanut industry has also witnessed strong upturn in the export market, which has grown by 71 percent between the 2008 and 2014 Farm Bill.

Other panelists for the hearing were Ronnie Lee, National Cotton Council chairman from Bronwood, Ga.; Blake Gerard, chairman of the USA Rice Farmers Board of Directors, Cape Giarardeau, Mo.; Rob Rynning, speaking as president of the U.S. Canola Association and also on behalf of the National Sunflower Association, from Kennedy, Minn.; and Jack Roney, Director of Economics and Policy Analysis, American Sugar Alliance, Arlington, Va. PG