In the well-known fairy tale about three bears who are away from their home, a little girl named Goldilocks wanders in and searches for the porridge, chair and, finally, the bed that is “just right” to suit her tastes. In irrigating peanuts, there is an amount that is “just right” for the crop as it grows.

Wes Porter, University of Georgia associate professor and Extension precision agriculture and irrigation specialist, strongly encourages producers to implement some type of irrigation scheduling tool to make sure the crop gets the water it needs, that “just right” amount, at the critical time, which is prior to seeing stress. 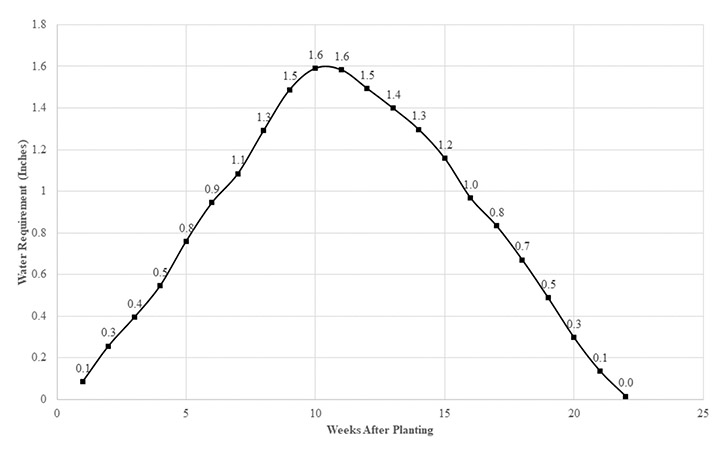 “Irrigation management is critical to high-yielding peanuts across the board,” Porter says. “In our trials, we’ve seen mismanagement of irrigation, both on the lower and the upper end, that has the ability to significantly reduce yields.

“We can overwater peanuts, and if we have a wet year like we have had the past couple of years, you need to be mindful of using one of the irrigation-management tools to make sure we don’t overapply irrigation to the crop.”

• Do not replace nozzles without referring to the pivot sprinkler chart. Verify the nozzle size is correct for the pivot location to ensure the nozzle operates at the specified pressure along the pivot.

• If you operate a variable rate irrigation (VRI) system, check if the solenoid valves are operating properly and electronics have not been damaged during fall or winter months.

• A catch-can test is recommended every year to evaluate the uniformity of water application.

• Make sure the pivot operates at the pressure for the designated sprinkler chart.

• Be aware that the revolution time, or speed, of the pivot is directly related to the amount of irrigation water to be applied.

• Common causes of operating pressure difficulties are wells in which groundwater declines through the growing season; worn pump impellers; water leakage from sprinklers along the irrigation system; elevation of the terrain.

Too Much, Too Little Affects Yields

Whether it is the most basic, the UGA checkbook method, or one using soil moisture sensors or one of the online scheduling tools that are free, Porter says growers should be mindful of utilizing one of these tools to manage irrigation and in-season climate variability.

Drought in the Southwest is ongoing, but the Southeast fell into a dry pattern in mid-May as well.

“Dry conditions decreased somewhat in Virginia and Florida and expanded slightly in North Carolina and Alabama,” she says.

With less than half an inch of precipitation expected in most of the region other than eastern North Carolina and southern Florida, Knox expects drought to increase.

In terms of peanuts, Porter says 2014 and 2019 have been the only years recently that could be considered dry.

“In 2015 through 2018, and in 2020, we received in excess of 20 inches of rainfall. However, even the wet years were dynamically different in the average temperatures, rainfall distribution, water requirements and yield,” he says.

It’s because weather conditions are so variable that irrigation and water management can be difficult to plan for. Producers have many options to choose from to help with irrigation management. More information on irrigation scheduling methods, including trial data, can be found in the chapter “Water Use and Relationships in Peanut Production” by Porter in the UGA Peanut Production Guide on the website peanuts.caes.uga.edu.

“There are many options available to producers such as the UGA Checkbook, UGA Easypan, online scheduling tools, and soil and/or crop sensors. Each method has potential for successful adoption, but it is up to the producer to make the decision on which method is the best for their operation. Each method has associated time and financial costs, but with the proper management, the return on investment can be very short,” Porter says.

Overall, farmers must find ways to adapt to changing conditions and manage the crop in these conditions.

“Make sure to stay on top of the crop’s water requirement throughout the season because it’s going to change as the crop grows and progresses,” Porter says. “We want to make sure that we get irrigation to the crop at the critical time and that is prior to seeing stress.” PG