From Here To Harvest 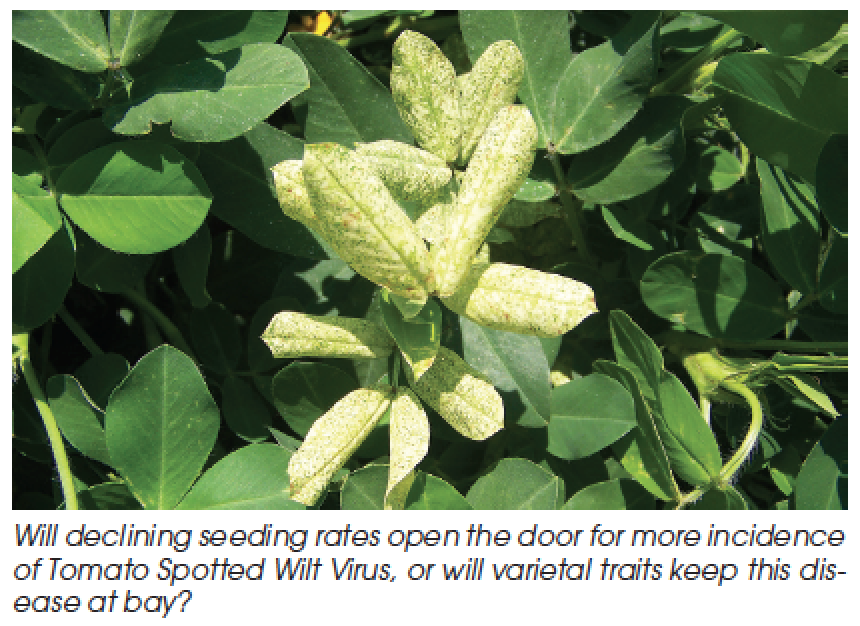 Planting conditions support the thought that the crop will be slightly less than last year.

Early reports of the 2016 crop are good, but a lack of uniform emergence caused by cooler weather conditions will likely cause problems later in the season. Without the ability for a “do over” of planting to get a more uniform stand, producers will need to be timely with production practices for management of the crop until harvest.

Cooler temperatures in May, followed by tropical weather in early June slowed planting and stand establishment in the Virginia-Carolina area.

“Peanut yield in the V-C region can be unpredictable when peanut is planted during June compared with plantings in May,” says David Jordan, North Carolina State University Extension agronomist.

Maria Balota, crop physiologist at Virginia Tech’s Tidewater Agricultural Research and Extension Center, agrees that the cool, humid weather conditions for most of May resulted in slow and non-uniform emergence.

“Herbicide injury was observed to some extent but was not excessive,” she says. “With thrips, not much damage has been observed.”

Balota says all peanut land was planted in Virginia and is estimated at 18,000 acres for 2016. “Outside of occasional seedling disease related to hot, dry conditions, stand issues have nearly always been somehow related to saturated soils, a problem peanut planted on beds can help alleviate,” he says.

Sarver says Valor herbicide, and now generic flumioxazin products, does a fantastic job of keeping fields clean if it is applied and activated on time. He notes that producers have come to expect some level of crop injury when using this product and that sometimes this injury can be severe, primarily when a heavy rainfall event occurs when peanuts are cracking the ground or have just emerged.

“It’s uncommon for this injury to significantly hurt stands, but I’ve observed it happening in low-lying areas that are subject to saturation after heavy rainfall events,” he says. “This, more than anything else I’ve observed in the state the last three seasons, has reinforced the need to get peanuts up on a bed.”

The lack of rains in some areas causes concern for activation of those residual herbicides needed for good Palmer amaranth control, making timely applications of postemergence herbicides more critical. “The impact of seeding rate of three, four, six and eight seed per foot on yield of Georgia-09B, Georgia-06G and Georgia-12Y as well as the occurrence of tomato spotted wilt, leaf spot diseases and stem rot were evaluated in 2014 and 2015 under rain-fed conditions.”

However, Hagan says that because of low spotted wilt pressure overall, disease incidence was not impacted by planting date, seeding rate or variety selection.

Similar yields averaging about 3,050 pounds per acre were recorded for all varieties.

Despite struggling to store the entire crop in the past few years, Sonny Deuell, senior vice president of marketing at Birdsong Peanuts, says he expects the industry to be able to manage the volume this year. He was speaking to participants at the International Peanut Forum in Madrid, Spain.

“Going into 2017, depending on how big the crop is and how we’ve been able to move the crop, that is a question mark,” he says.

For the global peanuts industry as a whole, the outlook and demand is generally positive.