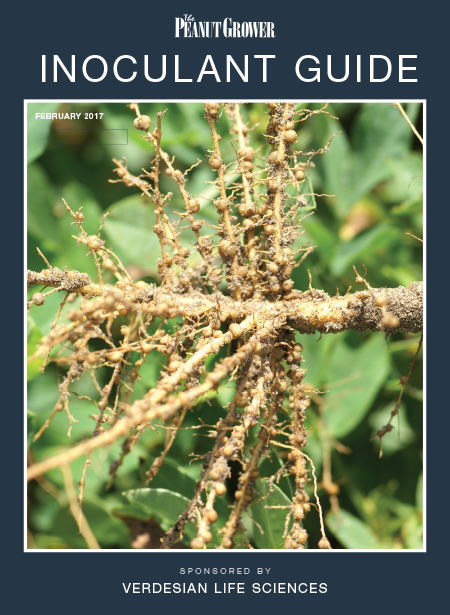 Using the latest, most advanced science and technology to produce maximum yield and quality is the goal of peanut producers, university and Extension researchers and crop input companies. With an inoculant product, this means identifying the best and most active bacteria that will work quickly around the germinating seed to colonize roots and begin supplying nitrogen to the crop in a symbiotic relationship between plants and the bacteria. By adding rhizobia in-furrow, the technology packed into these micro-organisms help increase nitrogen-fixing root nodules, which, in turn, boosts nitrogen uptake in plants. Put simply, adding an inoculant product in-furrow at planting is a countdown to success.

“The goal is to generate a healthier plant right from the start. Primo Power CL contains multiple strains of rhizobia that are isolated and produced to ensure optimum performance in all conditions and to perform especially well under stress.”

Phil Shelley, also a Verdesian Life Sciences technical sales representative based in Dothan, Ala., says the new inoculant product offers one of the highest rhizobia concentrations in the industry. “Primo Power CL delivers 4.5 billion colony-forming units of rhizobia per gram to the plant. This higher concentration ensures the highest level of aggressive rhizobia to produce larger amounts of peanut-producing nitrogen,” he says.

[dropcap]4 More Nodules On The Roots[/dropcap]

Peanuts that get a faster, healthier start and develop a larger root mass improve the crop’s chances for reaching its genetic

potential for greater yields, Deal says. “This peanut inoculant opens the door for more nodules, which provide more available nitrogen to increase the potential number of pegs and pods that are set.”

Quick germination and a uniform stand, leading to quick canopy closure is ideal for the crop to produce maximum yield, but this requires nitrogen.

[dropcap]3 More Nitrogen For The Plant[/dropcap]

“It opens the door for more nodules, which bring more nitrogen to the plant, resulting in better yield potential. A healthier plant is generated right from the start enabling the peanut seed to reach its full potential to maximize yield,” he says. “Primo Power CL gives growers the confidence that the rhizobia bacteria is there to give their peanuts the best chance to nodulate and grow.”

Deal says that even in less-than-ideal conditions, the specially selected strains of rhizobia in Primo Power CL are proven to help peanuts perform.

“Growers can be assured that they have given the peanut plant the nitrogen it needs to produce the maximum amount of pegs and pods,” he says.

“Basically, this product is an evolution of the company’s original Primo Power inoculant, which has been proven to deliver more profit per acre than other inoculant products,” Shelley says. “Producers are setting their crops up for success.”

By maximizing the amount of nutrients  taken up by the roots and made available to the growing plant, Primo Power CL improves stand count, raising yield potential, he says.

While maximum yield is the goal of adding an inocula As with most all inoculant products, Deal says it is compatible with most any product you would apply in-furrow.

But it’s the bottom line that Deal and Shelley know is most important for producers and both say that Primo Power CL provide the most active bacteria to increase nodulation and nitrogen fixation leading to more pegs and pod set and, thereby, more yield. That’s the bottom line.