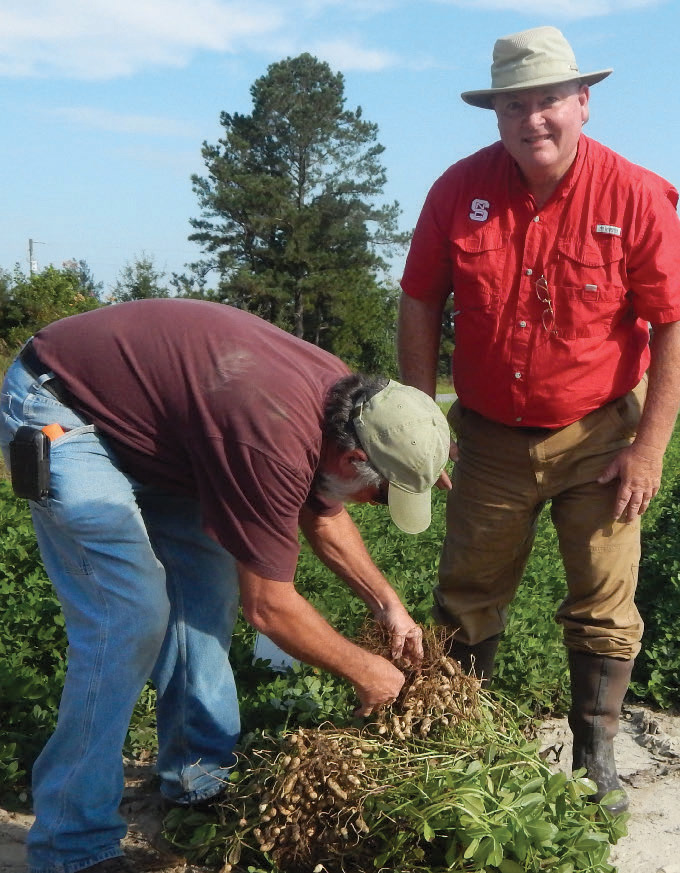 An increase in peanut yield of 1,500 pounds per acre from technology that costs less than one fungicide application was more than veteran North Carolina agronomist Wayne Nixon was prepared to understand and accept.

“I’ve been conducting grower tests most of my professional life, and in this case I planted the peanuts, treated the peanuts and harvested the peanuts, so I know it was done correctly, and I know the results are accurate,” he stresses.

Nixon has been around peanuts and peanut farmers all his life and has been an active advocate for both during his professional career, which includes being a field crops agent in Gates County, N.C. and a Regional Agronomist for 16 years with the North Carolina Department of Agriculture. During his years farming alongside his father, Thomas Nixon, they won four county peanut production championships.

He retired from the Department of Agriculture, and then landed what he says is the perfect job working as an agronomist for Severn Peanut Company. Most of his time is spent helping peanut producers grow better peanuts and be more profitable doing it.

One of Nixon’s many duties with Severn Peanut Company is to conduct grower cooperative trials with new and old products and try to help growers determine the most optimum, cost-effective ways to use technology.

While still at NCDA, Nixon did some work with a new soil amendment product, Quick-Sol, which improves soil quality and helps with the translocation of moisture and nutrients from soil to plant.

Nixon admits he was skeptical when it came to accepting the claims made by the new soil amendment. Despite this, Nixon says he and his colleagues at the NCDA did see some advantages of using Quick-Sol on a number of crops around the state.

Last year, one of the first tests he conducted in his new position with Severn Peanut Company was a two-state trial with Quick-Sol on peanuts.

“In South Carolina, I worked with Brian McClam, who farms near Kingstree,” Nixon says. “I planted the peanuts, applied the Quick-Sol and dug the peanuts on a 1.5-acre corner of a 40- plus acre peanut field.”

“We planted Bailey cultivar in standard 38-inch rows at about 140 pounds of seed per acre.

“There was really nothing special or different about how we planted, managed and harvested this 40-acre field of peanuts,” he adds.

Nixon notes that these peanuts were not planted in ideal conditions and that he didn’t use Quick-Sol in an ideal way.

“First, this was one of the driest areas in the Carolinas. For about 90 days, we got little, if any, rainfall. These peanuts were grown behind double-crop soybeans and grown in a strip-tillage system – not the ideal way we have all been taught to grow high-yielding, high-quality peanuts, Nixon says.

To add to the challenge, he applied Quick-Sol about 50 days after the crop was planted, instead of five to 10 days before planting, as is recommended in the application sheet.

“I did clean and re-clean the spray tank, filters and nozzles to be sure there was no contamination issues. I mixed and sprayed the product exactly as suggested,” Nixon explains.

In North Carolina, Nixon worked with Robersonville grower Charles James, who along with McClam are excellent growers and always do things in a timely and precise way. Because of this, Nixon says he feels like these tests got a more than fair representation by the grower.

The North Carolina tests were done under opposite weather conditions: very wet throughout the growing season.

“In fact, that is one reason we had to wait so long after planting to apply Quick- Sol. Again, not ideal timing of application, but how we applied the product was exactly as recommended, Nixon says.

“As I understand it, Quick-Sol is a true soil amendment and as such works at the soil level and basically works the same way, regardless of what crop is planted on treated soil.”

Pablo Gomez, CEO of Miami-based Beyond International who owns the global marketing rights for Quick-Sol, says the product is activated when mixed with clean, nearly potable water. When the activated product is applied to the soil, it creates openness in the soil through the shrinkage of clay molecules, which restores microbial activity and makes nutrients already in the soil bio-available.

In South Carolina, he says, the yield increase is most likely due to better moisture availability. According to Gomez, Quick-Sol supplies silicic (Si) in different forms a plant can absorb. Each molecule of orthosilicic acid contains 120 molecules of water. This is why Quick- Sol-treated soil consistently absorbs water and holds it until the plant needs it.

Quick-Sol promotes the formation of plant root systems and increases the root’s mass so the plant is better able to absorb and translocate nutrients and crop protecting chemicals, all of which work together to reduce plant stress and generally produce a healthier, more productive plant, Gomez concludes.

Nixon says exactly how Quick-Sol works to improve crop production is still a learning experience for him and likely for any grower who uses it, even for veteran researchers who test it in university sanctioned experiments.

“In our South Carolina test, Quick- Sol clearly provided some means of getting moisture to these drought-stressed peanuts,” he says. “In this test, the treated plots out-yielded untreated peanuts in other parts of the same 40-acre field by 1,500 pounds per acre.”

“The dynamic nature of the product and the ‘new’ part of this technology will make it difficult for peanut growers to accept. However, once they learn how to use Quick-Sol and understand that on peanuts it has the potential to make them $300 to $400 per acre above the cost of application, plus reducing their input costs, the economics will overcome all the challenges of using this product,” Nixon predicts.