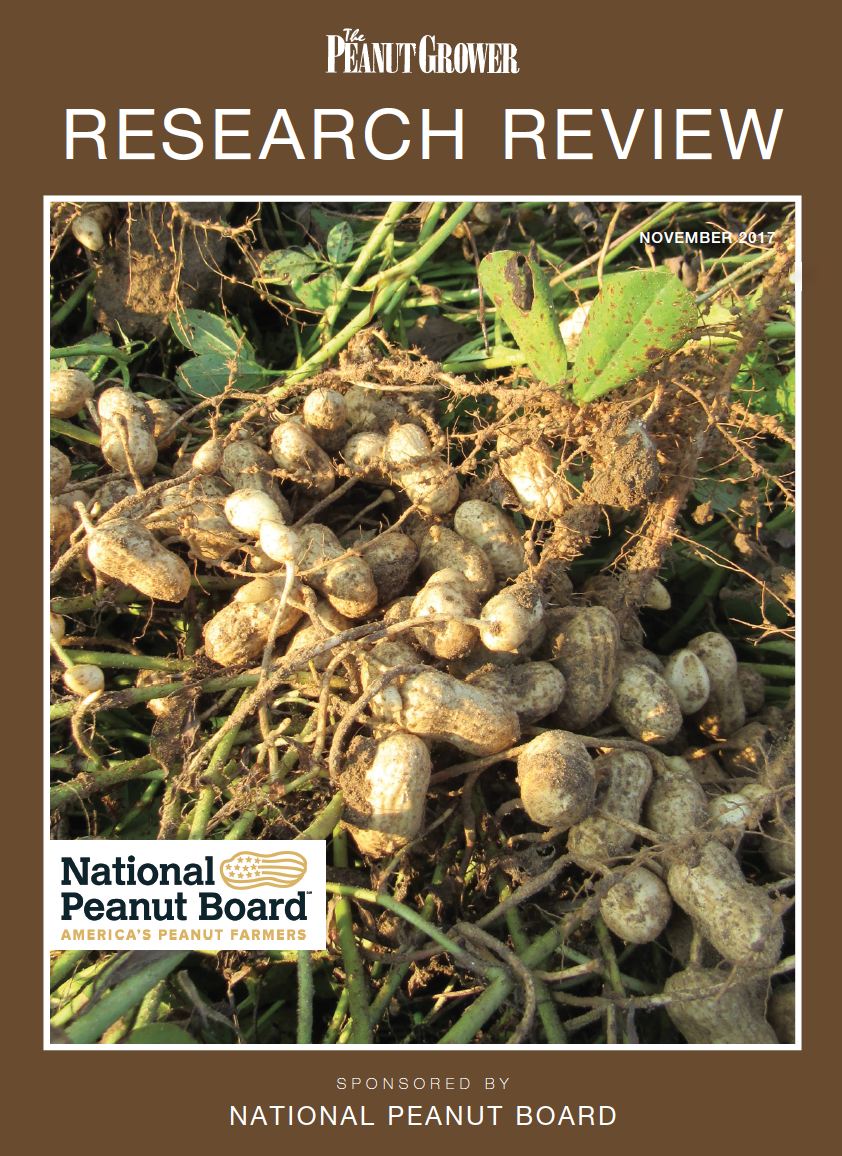 Imagine what peanut farming would be like had a group of farmers not come together to create the National Peanut Board. Without that reinvestment of more than $30 million back into peanut production research, what would peanut farming be like today? Fortunately, we will never know.

The very mission of the National Peanut Board, as it has been since its inception, is to improve the economic condition of USA peanut farmers and their families through compelling promotion and groundbreaking research. The purpose of this NPB Research Review is to highlight some of the production research presented at the American Peanut Research and Education Society Meeting this past July.

Water efficiency, pest management and peanut breeding are topic areas that can make the most significant impact for peanut producers and their bottom line. While research studies do not always yield essential nuggets of information for peanut producers to implement immediately, it does help to build on the body of knowledge of the peanut.

One important focus for peanut research is improving the water-use efficiency of peanut production. Whether it is through innovative tools or methods that mitigate the loss of yield, and therefore revenue, by a more efficient use of water, or through the development a more drought-tolerant peanut variety, the overall goal is to reduce the amount of water needed for peanut production. In this project, canopy temperature information was collected in research plots from the ground or from the air, using an unmanned aerial vehicle, at several times during the day and during the growing season. This data was compared with other observations such as leaf wilting because of water deficit stress or defoliation due to leaf disease.

Later, canopy temperature, wilting and defoliation were compared with yield values to develop estimates of yield using indirect evaluations. Using estimates such as this can make selection decisions for yield and stress tolerance happen even before harvest. After harvest, breeders can better manage time and resources by concentrating only on the most promising varieties estimated during vegetation. Other applications use canopy temperature to select varieties more tolerant to drought and less susceptible to diseases.

On 23 peanut varieties under two different water regimes, well-watered and water deficit stress, a correlation was found in that hotter canopies were wilted more and had less yield, sound mature kernels and crop gross return than cooler canopies.

Similarly, we found that peanut varieties with severe leaf defoliation because of late leaf spot disease were hotter than less defoliated varieties with better resistance to the disease. Therefore, canopy temperature can serve as a more precise evaluation tool for late leaf spot disease in breeding nurseries instead of a visual rating performed by different people with different visual perceptions.

Economic Considerations Of Irrigation
Scheduling is one way to make efficient use of irrigation, but cost is also an important consideration. Adam Rabinowitz, University of Georgia Extension agriculture economist, looked at the economics of irrigation scheduling methods in the following study.

Irrigation provides many economic benefits including improving crop production, reducing yield variability and increasing profits. However, there are costs involved to obtain these benefits, including substantial fixed costs for equipment and different levels of variable costs and management expenses depending on complexity. Different irrigation methods have substantially different costs associated with them, from free or inexpensive online or paper tools to more complex methods using sensors.

Four cultivars, GA-06G, GA-12Y, TUFRunner 511, and TUFRunner 727, were planted in two-row plots within each irrigation treatment zone. Rabinowitz established a return to capital investment from different scheduling methods in addition to a net dollar benefits controlling for differences in irrigation costs, variations in weed and disease control, and the opportunity cost of management.

Results showed irrigation net benefits of vary significantly, depending on rainfall amount and distribution and the scheduling method selected. During wet periods, irrigation can result in a net loss compared to rain-fed crops. Results can help growers understand how different scheduling methods affect profitability in addition to water use efficiency.

Key Finding: Net benefits of irrigation vary, but utilization of a scheduling method helps potentially increase yield and reduce the amount of irrigation applied to the crop.

Pests and Beneficial Species in Agricultural Production Systems
Develop innovations in management of diseases and pests that are costly deterrents to achieving sustainable yields and high quality in peanut productions.

Disease Interaction of Late Leaf Spot and Stem Rot on Peanuts was the title of a research project from Clemson University’s Dan Anco, Clemson University Extension peanut specialist, and Misbah Munir, doctoral student. This interaction was looked at because under field conditions, peanuts are commonly exposed to multiple diseases and the occurrence or severity of one disease can potentially affect the development of another disease through such mechanisms as microclimate modification.

In conclusion, no significant interaction was observed between late leaf spot and stem rot under the conditions experienced in the trial. However, late leaf spot developed late in the trial fields and an earlier development of the disease could potentially affect canopy microclimate and yield different results.

Key Finding: No significant interaction was found between late leaf spot and stem rot, but further study with different field condition is needed. The peanut burrower bug, Pangaeus bilineatus, has become an annual pest of peanut in the Southeast capable of causing significant economic loss.

Our understanding of where and why peanut burrower bug infestations occur is lacking and presents a challenge for the development of pest management tools. This work from Mark Abney, University of Georgia Extension entomologist, was undertaken to improve knowledge of the pest’s distribution and biology and to evaluate the effectiveness of potential management tactics.

This study used light traps to monitor P. bilineatus flight activity across two growing seasons at commercial peanut fields in Georgia. On-farm replicated studies in 2015 and 2016 evaluated the effect of tillage practices, insecticide active ingredient and insecticide application timing on P. bilineatus abundance and damage to peanut at harvest. Deep tillage prior to planting and the application of granular chlorpyrifos were shown to reduce the incidence of damage at harvest.
Pangaeus bilineatus was most abundant in light traps in June, though flight activity was recorded throughout the summer. Studies to further characterize environmental risk factors associated with pest abundance and damage and to develop management tools are ongoing.

Key Finding: More needs to be known about this pest to develop control tactics. At the APRES meeting, Mark Burow presented a study entitled “Development of SNP-Based Molecular Markers For A Peanut Breeding Program”, which offered the following update on peanut genome sequencing.

The Peanut Genome Initiative has been successful at producing whole genome sequences of peanut wild species, and is working towards a sequence of cultivated peanut. We are currently working towards development and employment of cost-effective markers for a peanut breeding program.

We are currently using a combination of SSR- and SNP-based markers to select for the high oleic trait, resistance to root-knot nematodes and tolerance to water-deficit stress. Markers for oil content and composition, and leaf spot resistance have also been developed.

Better-Yielding Cultivars
In a study by Jason Woodward, Texas A&M AgriLife Extension Service and the Department of Plant and Soil Sciences, Texas Tech University, the yield performance of runner, Spanish and Virginia cultivars was compared specifically for the West Texas region.

Woodward found that higher yields were achieved in runner trials, whereas trial averages were similar for Virginia and Spanish trials. In the runner trial, an experimental line yielded best, followed by Lariat and Webb. The lowest yields were from Quick Runner 14 and ACI 808.

In the Virginia cultivars, yields were greatest for Florida Fancy and ACI 442 and lowest for Sullivan. Stand issues within the Spanish trials affected yield variability.

Newer cultivars or breeding lines, such as Lariat and Webb (runners) and ACI 442 (Virginia) appear to have yield potential greater than the standard cultivars. Additional information on quality and reaction to diseases common to the region is needed. Testing will be repeated in subsequent years, contingent upon seed availability.

Year after year, research presented at the APRES meeting continues to build. There is still much to learn about the peanut. Often this research filters out ready-to-use information for producers, but in other cases it will take many years of research to bring a finished product to the farmer. In all cases, research scientists greatly appreciate the support of peanut farmers for their work.

To learn more about the American Peanut Research and Education Society, go to www.apresinc.com. Click on “Peanut Science” to view the on-line research journal dedicated to publishing the results of research, education and Extension projects and programs related to the production, storage, processing, manufacturing or marketing of peanuts.

Because the genetic makeup of the peanut is so complex, a database is needed to hold the information. Researchers can use the database in various ways to assist with their studies.

PeanutBase, found at www.peanutbase.org, is a resource for the peanut research community. The main features include genome browsers, genetic map viewers, sequence search tools, a database of traits and QTLs, marker-assisted selection pages, geographical maps of germplasm accessions, and gene expression information for peanut tissues and conditions.
The website and database hold the genome sequences of the two closest ancestors of cultivated peanut (Arachis duranensis and Arachis ipaensis – progenitors of the cultivated tetraploid, Arachis hypogaea).

Important research tools such as this require funding. PeanutBase is funded by The Peanut Foundation as part of the Peanut Genomics Initiative with additional support from USDA’s Agriculture Research Service. Peanut producers, and all industry segments, have readily supported The Peanut Foundation; however, advocacy on behalf of producers for the government-funded portion is also important to continue this valuable resource.

Production practices used every day during the crop year and certainly the seed planted in the ground are the products of years of peanut research. Peanut farmers have stepped up to the plate with funding production research through the National Peanut Board and state grower associations, but that alone is not enough for the work that is needed to move peanut research forward to feed an ever-growing world population. Outside funding resources are more difficult to find.
In 2014, the Farm Bill included a provision for commodity boards to obtain matching funds from the National Institute of Food and Agriculture. Beginning in 2015, NPB was one of two national commodity boards to submit applications for research topics to NIFA, which were accepted.

Since that time, NPB has collaborated with three additional peanut industry funding partners, Southeastern Peanut Research Initiative, The Peanut Foundation and The Peanut Institute, for funding of research topics, which NIFA has matched dollar-for-dollar.

Continuation of this funding source in the next Farm Bill will be critical for the progress of peanut research.