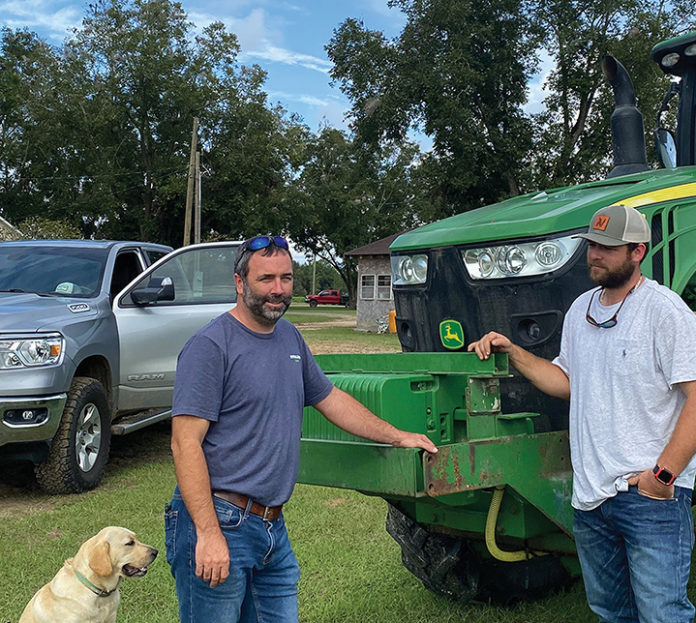 It’s been a wet year in Baxley, Georgia, as it has in much of the Southern peanut belt. Not needing to spend the money on irrigation is a good thing. However, not being able to get into the field in a timely manner to spray fungicides for protection against diseases is a recipe for disaster.

For Baxley peanut producer Ryne Powers, that is what he faced in 2021 but not the way it started.

“We planted timely, and they came up really well. The first week or two conditions were good, and then we had a dry spell.”

Powers says the Odum Powers Farm is a diversified operation of 1,700 acres of row crops along with chicken houses.

Ryne Powers, Odum Powers Farm
Baxley, Georgia
• Has a diversified operation with 400 acres of peanuts, 700 acres of
cotton, and the rest is in corn and beans, plus chicken house.
• Started planting Georgia O6Gs on May 6.
• Begins fungicide program at 40-45 days after planting.
• May stretch sprays to three weeks but not with the rain this year.
• Is happier with the protection and yield he has gotten from the
more premium fungicides.

Powers plants mostly Georgia O6Gs in twin rows, but he is also trying some of the Georgia 18RU variety. “We started planting peanuts in the first week of May and were done by about the 20th.”

He says the peanuts were not stressed too badly during the dry spell and held up pretty well.

“About the middle of June, it started raining and it hasn’t stopped yet.”

Powers says they were not only getting a lot of rain showers, but it would be significant rain events of a few inches. “In between these rains, it would stay cloudy for a couple days and then it would rain again.”

It just happened to be the luck of the draw in his three-year rotation that peanuts were planted on the higher land this year. “That’s a definite benefit for yields. We can see the difference in the peanuts that are in some of the lower areas.”

In this rotation, he also didn’t have peanuts in any irrigated fields, which is OK since it wasn’t needed.

Rocky Courson is the Nutrien Ag salesman in Powers’ area and also facility manager in Baxley. He says South Georgia is primarily flat land, but there are areas you would call higher and lower.

“It has been a wet year in South Georgia. The higher dirt that drains well should yield pretty good. The low dirt probably will not do as well,” Courson says.

Rain, although needed and welcome by producers, presents many challenges. One of which is maintaining a spray schedule for a successful disease management program.

“We stay proactive with disease management,” Powers says. “We use Elatus and like what the product does for us.

“This year, peanuts were up in price and, as much rain as we were getting, I felt we had a chance at getting a really good crop. I went with an extra trip of Elatus than I normally would. With prices where they are at, we decided it was an investment that would likely pay off.”

Powers says they usually try to stretch sprays out three weeks with the more premium products.

“This year, we stayed on a pretty tight schedule of 14 to 16 days because we were having so much wet weather. We didn’t want to get behind. We’ve had a little bit of leaf spot, but other than that we’ve been satisfied with our fungicide program this year.”

Before Elatus was available, Powers says they were taking the approach that cheaper was better.

“We were using strictly tebuconazole and Bravo. One year, it was wet like this one and we had too much disease. Rocky suggested we try Elatus the next year. We started putting that in our spray schedule and alternating it with the other, less expensive, fungicides. That has been successful for us, so we stayed with it.”

Flexibility is a big benefit in fungicide programs. Courson says that the longer window of protection offered by some products is a definite selling point.

“I started working with Elatus, then Miravis when it came out, and I could see the flexibility that it gives farmers. Labor is getting to be a big problem around here. Most of our farmers are more diverse with not just peanuts and cotton anymore, but chicken houses and tobacco and other enterprises. Elatus and Miravis cost more, but we see the results of the crop protection and flexibility.

Another example on the need for flexibility, Courson says they received 2 1/2 inches of rain the day before.

“If you are trying to spray, that much rain will likely make you three or four days late,” he says. “Whether it’s the weather or like it is right now with COVID, difficult to get needed parts, Miravis and Elatus gives you that longer window of protection and more flexibility.”

In peanuts, as all row crops, yield is where the rubber meets the road.

“With inputs and chemicals increasing in price, Folicur+Bravo versus Miravis+Elatus might be a $30 difference, but plants are healthier with less disease and farmers are getting more yield,” Courson says.

Powers is optimistic about his yields.

“I’m thinking what I’ve picked so far is close to 5,000 pounds per acre. I’ll have some lower areas that bring it back to around 2 tons per acre, but I am hoping for a 5,000 pounds-per-acre average. PG