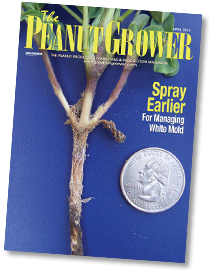 The yield potential of newer cultivars is well established, especially after a new record average yield in 2012 of 4,192 pounds per acre. That’s the upside. Producers, Extension personnel and researchers are now realizing that the new varieties have a downside, and it seems to be susceptibility to disease.

Tim Brenneman, University of Georgia research plant pathologist, says more of the focus of disease management is now purposed on white mold, and that greater vulnerability to disease means more reliance on fungicides.

Brenneman says the white mold starts on the hypocotyl of the plant right below the soil level.

“Most times, it doesn’t kill the plant, but it gets established, and that gives it a good start for later in the year,” although he says he has seen seedlings destroyed by white mold.

“White mold is a hot weather fungus, and we are seeing some hotter weather, especially in the early part of the season when peanut plants are starting to grow,” he says. “The trend is for warmer temperatures throughout the season.”

Early emergence sprays:
• Early sprays can reduce both leaf spot (how long) and white mold.
• Later applications, at 30 to 40 DAP, may be better than very early sprays.
• Low spray volumes gave similar disease control and yield as the high volumes.
• Banding concentrates fungicide where needed.
• Implications for disease management programs in the first 60 days of the season.

Early Season Protection
In the early season, Brenneman says there are three ways to deliver a fungicide.

“The first is through a seed treatment, and in our production systems, treated seed is pretty much a given,” he says.

“The second way is infurrow where you are delivering the fungicide and the seed into the furrow at the same time, and then covering it up. It’s a good way to get the fungicide in with the seed for an extra dose beyond the seed treatment.”

The third way of delivering fungicide protection in the early season is something that Brenneman and other UGA pathologists have been looking at for the last few years. Like discoveries often do, the idea came about a little by accident.

“The idea behind it was for CBR and, in my mind, it was sort of a salvage treatment,” Brenneman says. “We took a single, flood-jet nozzle and a high volume of spray and put it right over the plant and covered the plant in enough fungicide to wash the product down the hypocotyl to the roots, if possible.

Banding vs. Broadcast:
• Banding is more difficult to accomplish.
• Banding concentrates fungicide where needed.
• Broadcast sprays give at least some early protection against white mold.
• Banding is most critical with short rotations and susceptible cultivars for white mold and CBR.

A New Idea
“One of the things we saw by accident was pretty good control of white mold and even some control of leaf spot,” Brenneman says.

“In 2010, when we started looking at this, we ended up not having CBR because of the hot spring, but what we had was a pile of white mold. In this particular field, we sprayed it full season with chlorothalonil so we controlled leaf spot, and foliar disease was not an issue, but we had pure white mold.

“Our plots were sprayed one time at 21 days after planting with a band of Proline fungicide,” Brenneman says. “I have worked with white mold for almost 25 years and would never have guessed that you could see the type of control we got for the season with the one spray at three weeks after planting. It clearly had a huge effect on the white mold epidemic.”

Application Specifics
“Research efforts at the University of Georgia in 2010, 2011 and 2012 have documented that applications of Proline at 5.7 fluid ounces per acre, the same rate as applied in-furrow, banded over young plants two to five weeks after planting can have a significant and season-long benefit for managing white mold,” writes Bob Kemerait and Albert Culbreath, along with Brenneman, in the Disease Management in 2013 section of the UGA 2013 Peanut Production Update.

“Applied in-furrow at planting, Proline aides in the management of Cylindrocladium black rot (CBR). However, when applied to the peanut crop a few weeks after emergence at the full rate, Proline can provide season-long benefits to the management of white mold and possibly Rhizoctonia limb rot as well.”

The researchers say that Abound is also labeled for such early season applications, and research continues to compare efficacy of Proline versus Abound.

Timing Of Sprays
For timing, early season applications of Proline have been evaluated between two and five weeks after planting.

“Although each of these timings can offer increased white mold protection, in 2011 the level of white mold control and subsequent yield benefit on early planted peanuts increased as the application was delayed, and the best results were observed five weeks after planting,” says the disease management update. “The value of specific timings is likely to vary by season based upon planting date and weather conditions early in the season.”

Brenneman says the earliest banded spray application he would recommend is at about three weeks of age.

“The one exception would be where CBR is the target, and in that case an infurrow application would be best, and next best would be the banded application to very young peanuts. For the majority of growers, I would wait a little later at about 30 days after planting.”

Producers are reminded that an early season application of Proline contributes to the overall management of white mold; however, it is unlikely to provide all of the control that is needed.

“Early season applications of Proline should be followed by a standard soilborne fungicide program,” says the group of plant pathologists, although there is real potential for reducing mid-season sprays. Such programs are currently being evaluated and will be recommended if they perform well and cost less.

Why Spray Young Plants?
Getting a jump on white mold management is reason enough to make an early season banded application of fungicide, but there are other benefits as well.

“Improve plant stands, control some of the seedling diseases, improve vigor and delay the foundation for diseases visible later in the season, especially diseases such as white mold and CBR, are some of the additional benefits to early season spraying,” Brenneman says.

He also says that research has shown that for white mold control producers will get more out of a banded application of Proline applied after emergence than from an in-furrow application, and the benefit is season-long, even though additional white mold management, including sprays, is recommended.

“Clearly there’s something significant significant about concentrating fungicide in an early season spray,” he says.

UGA plant pathologist recognized for improving the world, one peanut at a time