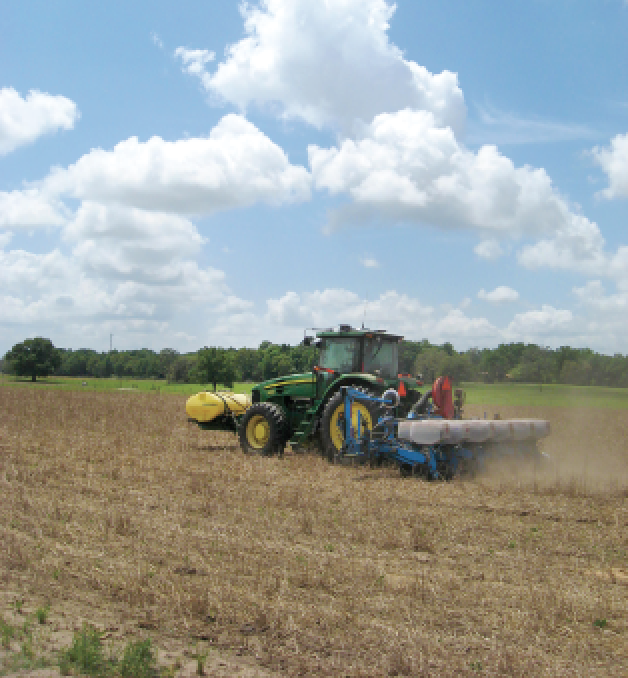 Several key items talked about during production meetings were tillage practices and planter configurations in relation to yield. Growers are always looking to maximize yields. In deciding to change from one cultural practice to another, I would encourage growers to determine if more yield equals more profit.

Many grower conversations were regarding tillage and yields in conventional versus reduced tillage in UGA research trials. The trend for many years has been for conventional tillage to increase yields 200 to 500 pounds per acre. If yield was the deciding factor, the decision would be easy.

The thing to remember is most growers converted to reduced tillage for one or more reasons, such as reduced time/trips across the field, reduced fuel and equipment costs, reduced thrips and TSWV pressure and water conservation. For these reasons, I would not be too quick to make a change in tillage practices. However, in fields where peanuts are being produced under rotations of one year or less between peanut crops, there might be a need to alter this recommendation. Growers would have a better chance to maintain yield potential if soils were deep turned and an effective fungicide program is used. It is also understandable that growers may not want to convert back to conventional tillage because of increased expense and time in the field.

A similar approach needs to be taken with row configuration. Twin-row pattern has an advantage over single rows when it comes to faster canopy closure, which helps reduce thrips feeding and TSWV infection, regulates soil temperatures and reduces moisture evaporation. But, a twin-row planter can be expensive compared to a single-row planter. The question is can this advantage with twin rows increase yield potential enough to offset the difference in cost between twin-row and single-row planters? In the late 1990s and early 2000s, the answer would be yes because of the susceptibility of varieties to TSWV. This is not the case with current varieties that have high levels of TSWV resistance. Since then, there has been very little difference in yield among twin and single-row configuration. Therefore like with tillage, growers need to weigh both yield and economic return before dramatically altering current production practices.

If April’s weather is as warm as the winter has been, peanut planting time is just around the corner. Allow me to offer a reminder that you need a four-inch soil temperature of 68 degrees for three consecutive days, plus a forecast that continues those same conditions, for planting.

This planting season concerns me because of the warm winter we just endured. The warm temperatures will create increased thrips pressure early, and this is very alarming because of the fact that we have seen increased Tomato Spotted Wilt Virus in Georgia-06Gs for the past couple of years. I encourage everyone to be mindful of this, and be sure to use an insecticide at planting for thrips. Also think about the best management practices to lower your risk of TSWV such as strip tillage, twin rows, seeding rate, planting date and variety. Even if you plant in April, using twin rows with a higher seeding rate would help reduce the risk of TSWV. If variety choice is your only defense to TSWV, then Georgia-12Y would give you the most resistance. Some of our best dryland yields in Alabama the past two years have been from April-planted peanuts. But, when planting early, don’t try to cut costs.

Peanut has a symbiotic relationship with Rhizobium bacteria, where the bacterium obtains some nutrition from plant roots and the plant gains usable nitrogen. Good bacterial inoculation is essential in getting the full benefit of growing a legume. Several types of peanut-specific inoculants are commercially available including seedbox powders, granular formulations and liquid inoculants, with the latter being the most popular and providing the best nodulation.

It is important to remember that peanut inoculants are comprised of living microorganisms, thus special steps in storage, handling and mixing must be taken to ensure their survival. Inoculants should be stored between 40 degrees and 80 degrees Fahrenheit in a dry place out of direct sunlight. Once opened or mixed, units should be used within 24 hours. If using a liquid inoculant, avoid mixing with chlorinated water. In addition, inoculants should not be mixed or applied with fertilizers.

Hot soil temperatures, shallow planting and low soil moisture can kill Rhizobia and lower populations capable of inoculating peanut seedlings. Early season scouting may be required to ensure adequate nodulation or to identify fields that may need supplemental nitrogen applications to help achieve yield goals. Active nodules are pink to dark red, whereas inactive nodules are black, gray or green inside. Early season nodulation ratings of greater than 20, 16-20 and 11-15 nodules per plant are considered excellent, very good and good, respectively, and will likely not benefit from supplemental applications of nitrogen. I was recently asked the question, “When should one plant peanuts in our area?” We often point out temperature at a certain depth of soil for a certain number of days as an indicator of when conditions are favorable for stand establishment, for example, 65 degrees Fahrenheit for several days.

Results from planting date research at one of our locations in northeastern North Carolina demonstrate that early May and late May carry risk relative to yield compared with mid-May plantings. Planting in late April and early June can work on occasion but these planting dates carry even more risk compared with May plantings, in general, but mid-May plantings, specifically. I do realize that folks can’t plant all their peanuts at one time or within a few days – we have just become too big. It can take two weeks even when conditions are perfect.

My recommendation is to shoot for the first 2 weeks in May as a priority for planting peanuts. Seed cost for peanuts is high, so I would avoid late-April plantings. The challenge with late-May planting is that poor weather can turn this date into an early June planting, and planting in June in the upper V-C carries considerable risk from a maturity standpoint.

Management in general, but more specifically for pests, does not change a great deal across the month of May, but there are some exceptions. Peanut are more vulnerable to spotted wilt and CBR if panted early. Planting late makes us more vulnerable to rootworms and may impact pod maturity if we have a cold snap in early fall. We also generally see less overall disease with later plantings. Peanuts are subjected to a longer period of thrips feeding when planted early. These differences tend to average out in the sense that knowing what you are up against with your planting dates helps you adequately address the pest in question.

While every year is different, we have found that planting peanut in mid-May, establishing five plants per foot of row and making sure peanuts get inoculated are a part of a great start. There are certainly other things to consider, but shooting for that mid-May planting date helps set the stage for consistent success.