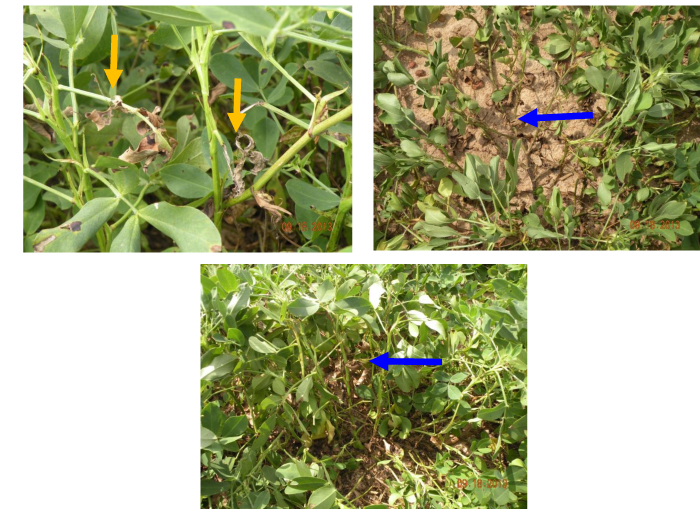 Based on samples collected from peanut research plots in Headland and Fairhope, Ala., three-cornered alfalfa hopper (TCAH) adults can be found in significant numbers.

TCAH are one-quarter inch long insects that overwinter as adults or in the egg stage. These insects are native to the United States and they have a very wide host range and can move easily from grasses to row crops or horticultural crops. The adults are most noticeable because they readily jump off the foliage when disturbed. Adults are wedge-shaped with a broad prothorax behind the head. The nymphs have numerous spines on their body and lack wings. Both nymphs and adults have piercing-sucking mouthparts that are used to feed on plant sap.

TCAH has an extended lifecycle, which means that nymphs and adults tend to stay and feed on crops for a long duration, and there can be two generations or more of TCAH in peanuts. They prefer hot and humid microclimate inside peanut canopy, so TCAH numbers increase after a heavy rainfall.

The greatest damage is caused by ‘girdling’ of stems that causes lateral branches in peanuts to die (see photos below). Heavy girdling of branches on the top can make the field look like it has been grazed (orange arrows in picture below). However, if the TCAH numbers increase rapidly then the feeding injury can be seen on lower branches (blue arrows in picture) and that may delay pod development. In past trials with new peanut varieties, negligible yield loss due to TCAH during the late-season has been noticed, but insecticides may be needed at the field edges and other hot spots to prevent pest buildup and migration. If you are within 25 days of digging peanuts, then insecticide use is not recommended for TCAH control. Some peanut producers may also see yellowing of leaves (hopper burn) due to the feeding by potato leafhoppers.

Many of the synthetic pyrethroids do a good job of controlling TCAH, leafhoppers and caterpillars if you are concerned about a rising pest population in late-planted peanuts. Always rotate insecticides and stop using them once the pest pressure is reduced. Visit www.aces.edu/pubs/docs/I/IPM-0360/IPM-0360.pdf for full insect scouting and control recommendations in peanuts. PG