For early season pest management, this is an investment you can bank on. 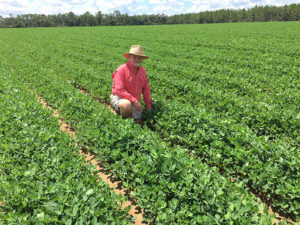 As the 2019 growing season fades into the past, growers are making key decisions for the upcoming crop. As always, it’s a balancing act between investment and potential return.

“It’s always a difficult decision to make,” says Ken Craft, a grower in the Damascus, Georgia. “In the past few years, it’s been particularly heart-wrenching due to the hurricanes we endured in 2017 and 2018. Luckily, in 2019 we escaped those disasters.”

Craft grows both peanuts and cotton. For years, he applied Temik aldicarb for early season pest control. When it went off the market for several years, he switched to liquid in-furrow alternatives.

“I thought liquid in-furrow was the next big thing,” he says. “Everybody was going to it when we lost Temik for a few years, so I switched my planters over to handle in-furrow liquid applications.”

“It’s the same product, just a different name,” he says. “It works the same as we remembered. I’ve been using it since it came back on the market, and it hasn’t disappointed.

No Thrips To Speak Of

In 2019, thrips took a toll on most cotton and peanuts in the Southeast. Rainfall was scarce, and heavy thrips pressure inflicted widespread destruction on peanuts and cotton, according to weekly reports from growers, consultants and researchers in the region.

Craft had a different description of the situation.
“If I had thrips, I couldn’t tell it,” he says. “AgLogic aldicarb took care of that problem. We didn’t even have to spray for them on peanuts or cotton. And there’s no doubt the product takes care of mites on both crops. We just don’t have them.”

Give Yourself A Fighting Chance

When asked about nematodes, Craft says, “We’ve got most anything you can name — reniform, root-knot, lance and possibly ring. It’s a big problem in this area. There are not a lot of options. Fumigation is expensive and doesn’t control thrips. Rotating with cotton will help when it comes to managing peanut root-knot nematode because cotton is not a host. However, rotation doesn’t do anything for thrips control on either crop. That’s where we really feel the impact of early season pest control.

“Seed treatments are basically ineffective due to increasing resistance,” Craft says. “And in-furrow liquids don’t perform as well as what you need or expect — especially when early season foliar and nematode pest populations are heavy like we had last year.”

Despite challenging crop prices going into peanut and cotton planting, growers should invest in those variables they can help manage. “If you can get thrips and nematodes under control in the early season, you at least have a fighting chance for a successful crop,” Craft says.