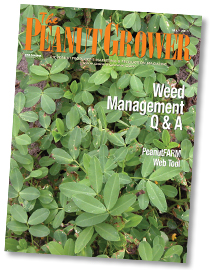 Not surprisingly after the huge crop of 2012 and the drop in prices, Planting Intentions as reported by producers to the United States Department of Agriculture’s National Agriculture Statistics Service are down considerably from last year. Based on the report, released at the end of March, growers intend to plant 1.19 million acres in 2013, down 27 percent from the previous year.

However, the wildcard with the report is that cool weather and spring rains continued through early April and affected the planting decisions of some producers. Other crops’ prices also began to drop and alternatives to peanuts no longer looked quite as attractive.

Overall, all states intend to plant fewer acres to peanuts except, possibly, Oklahoma. Georgia’s producers have indicated a return to 2011 acreage levels of 475,000 acres, down from their record of 735,000 acres in 2012. In fact, most state acreages will be similar to that planted in 2011 before the huge price increase of 2012. Mississippi producers indicated they will plant less than 50 percent of acres than were planted in 2012. Weather
Winter precipitation eradicated drought across much of the lower Southeast and heavy rain triggered lowland flooding across the Deep South, including Florida’s panhandle.

Farther west, above-normal winter precipitation provided some limited relief to drought-stressed rangeland, pastures and winter wheat on the Plains. Beneficial winter precipitation also fell across the upper Midwest; however, subsoil moisture shortages persisted across the Nation’s midsection as producers prepared for spring planting. In contrast, drought was mostly eliminated before or during winter in the eastern Corn Belt.

Cotton
Growers intend to plant 10.0 million acres in 2013, down 19 percent from last year. Upland area is expected to total 9.82 million acres, down 19 percent from 2012. American Pima area is expected to total 206,000 acres, down 14 percent from 2012. If realized, planted area in Arkansas, Louisiana, Mississippi, New Mexico and Oklahoma will all be record lows. As of March 24, cotton planting in Texas was three percent complete, which is five percentage points behind last year and two percentage points behind the five-year average.

Soybeans
Growers intend to plant an estimated 77.1 million acres in 2013, down slightly from last year, but up three percent from 2011. Compared to last year, planted acreage intentions are down across all of the Great Plains, with the exception of North Dakota, as drought conditions have persisted in many of these areas. However, the net intended change from last year for the United States is only a loss of 72,000 acres because expected increases in planted area across most of the eastern Corn Belt and parts of the Southeast nearly balance out the declines in the Great Plains.

If realized, the planted area in New York, North Dakota and Pennsylvania will be the largest on record.

Corn
Growers intend to plant 97.3 million acres of corn for all purposes in 2013, up slightly from last year and six percent higher than in 2011. Expected returns for corn are again historically high going into 2013. If realized, this will represent the highest planted acreage in the United States since 1936, when an estimated 102 million acres were planted.