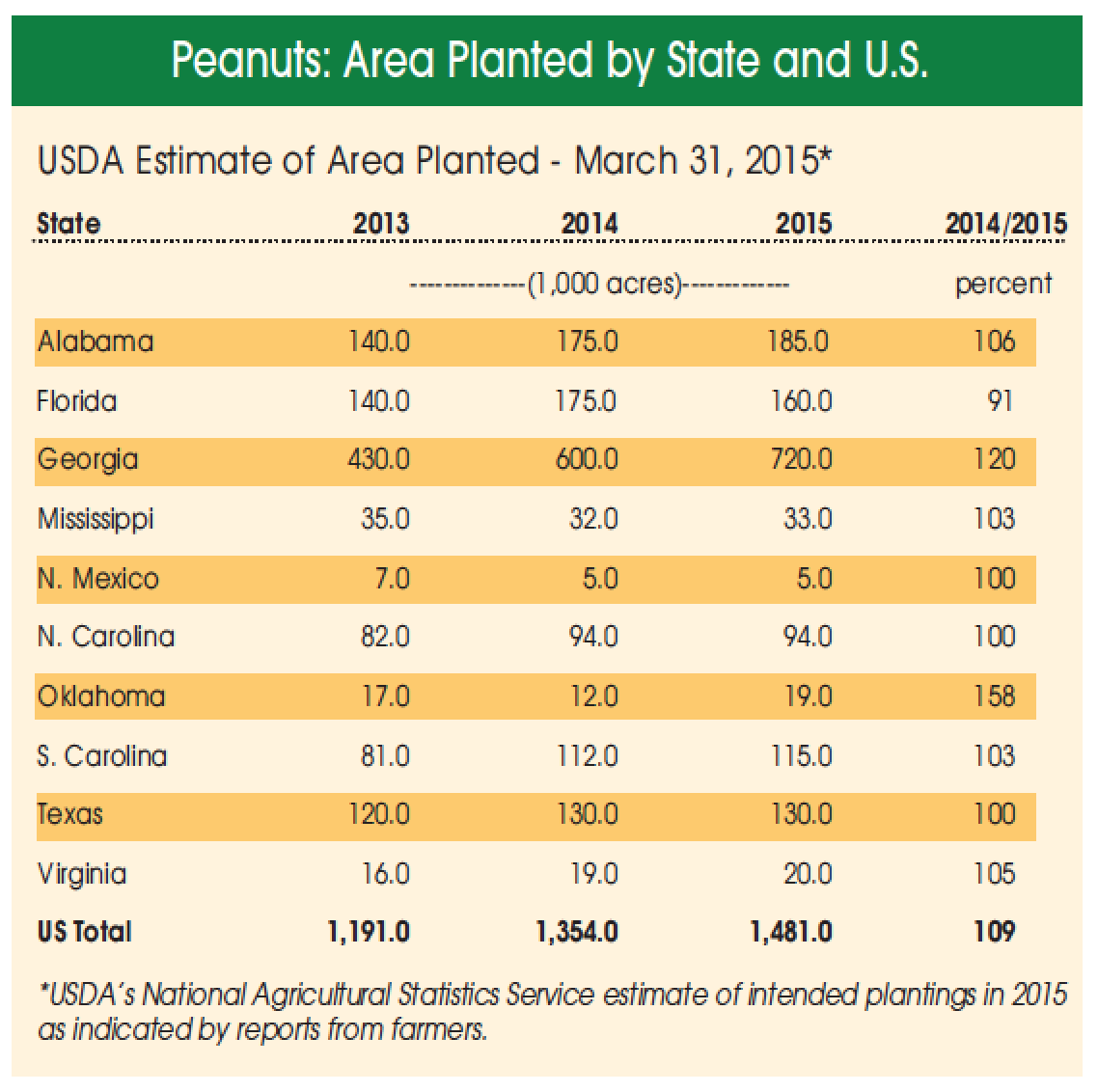 Although acreage increases of 20 to 25 percent have been talked about all winter, the United States Department of Agriculture’s National Agriculture Statistics Service says that producers only intend to plant 1.48 million acres in 2015, up 9 percent from the previous year. A modest increase such as this would be most beneficial to producers and the market moving through this year and into next. The expected increase in planted peanut acres is mainly because of low prices of other crops, especially cotton, and Farm Bill changes in cotton base, now called generic base, that allow producers to plant it to another covered program crop. With no other crops being competitively priced, most people have expected much of that acreage to go into peanuts.

Georgia planted area is expected to be up 20 percent from 2014. However, Florida indicates a decline in acreage. If realized, planted acres in South Carolina will be a record high, but only a three percent increase over 2014.

Most of the Virginia-Carolina plantings will be similar to last year or up only slightly. In the Southwest, Oklahoma shows a possible acreage increase of 7,000 acres, with other states staying the same.

Growers intend to plant a record high 84.6 million acres of soybeans in 2015, up one percent from last year. Compared with 2014, planted acreage intentions are up or unchanged in 21 of the 31 major producing states.

Increases of 200,000 acres or more are anticipated in Arkansas, Iowa and Ohio. Compared with last year, the largest declines are expected in Kansas and Nebraska. If realized, the planted area in Kentucky, Minnesota, New York, Ohio, Pennsylvania, South Dakota and Wisconsin will be the largest on record.

Growers in all states except Oklahoma are expected to reduce planted acreage from last year. If realized, planted area in Arkansas, Louisiana and Tennessee would be record lows.

Growers intend to plant 89.2 million acres of corn for all purposes in 2015, down two percent from last year and down six percent from 2013. If realized, this will be the lowest planted acreage in the United States since 2010. The reduction in planted acres is mainly due to the expectation of lower prices and returns in 2015.