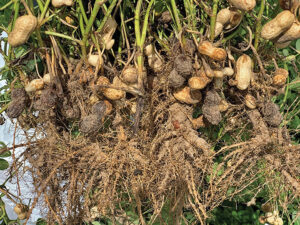 This picture shows typical symptoms of peanut pod rot. Note the dark colored pods with sand and dirt stuck to the shell. Despite the presence of pod rot, the root system is generally healthy — photo by De Broughton

In early June, Tropical Storm Cristobal provided torrential rainfall, followed by even more showers for a total of 18 to 22 inches within a week’s time in some locations. From that point forward, frequent afternoon showers and increased temperatures coupled with a maturing stage of peanut growth, allowed for soilborne diseases to proliferate.

Potassium and gypsum applied before the heavy rains could have been lost to leaching, which would contribute to pod rot disease emergence. Canopy closure makes it difficult for soil at the base of the plant to dry, again providing a scenario for more disease pressure to develop below ground.

Deterioration or rotting of fully developed pods is what gives this disease its name. The color and texture of the diseased pods can be either tan to brown with dry decay or greasy, dark brown/black with wet decay, depending on the pathogens and the environment.

Many pods may remain in the soil after digging because of weakened pegs. Often there are no above-ground symptoms associated with pod rot, and severely affected plants may be darker green and have prolonged flowering. Generally, the root system is not affected.

The three most common pathogens associated with this disease are Pythium myriotylum, Rhizoctonia solani and Fusarium solani. The severity of pod rot is related to presence of a specific pathogen in some cases, or multiple pathogens, and a wide variety of environmental factors, such as deficiency of a specific plant nutrient — calcium. In Florida, it has also been found that pods exposed to moderate levels of peanut root-knot nematode in combination with Pythium myriotylum sustained 31% more decay.

The vulnerability to pathogens is reduced in pods containing 0.2% or more calcium. The critical period for calcium absorption begins about 20 days after pegs start entering the soil and extends for 60 days. The problem occurs when there is no moisture for calcium to be in solution for uptake by peanut pods.

Soil test levels of about 450 pounds per acre of calcium result in maximum runner yields, while double this amount is needed for Virginia-type peanut. If soil samples show only calcium to be low, then calcitic lime would be satisfactory. However, if both calcium and magnesium are low, then dolomitic limestone should be selected. Lime should be applied three to six months before planting and up to planting.

With fungicides, consider the potential for pod rot development, the growth stage/time to maturity of the crop and the pre-harvest interval of the product. In many cases, for moderate levels of pod rot late in the season, the return on investment for the fungicide application might not justify the cost.

Another option is to use at least 15 gallons per acre and spray at night as the product will have a better chance to reach the target. The effectiveness of applying fungicides through an irrigation system for pod rot protection is unknown. PG