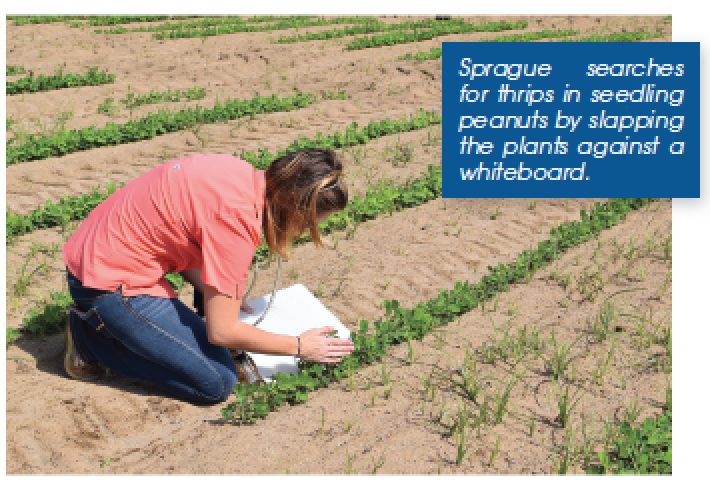 University of Florida researchers study the resistance of tobacco thrips to  neonicotinoid seed treatments; additional insecticide applications may be needed.

Tobacco thrips, Frankliniella fusca, are seedling pests of peanut, soybean and cotton throughout the southern United States. Adults and larvae feed on the developing leaves, causing injury during the very early vegetative stages of the crop. Peanut is highly tolerant of injury, although delayed maturity can occur when thrips injury is combined with other early season stresses such as herbicide injury or drought stress. Severe injury to soybean results in little, if any, economic damage.

Seed treatments of the neonicotinoids imidacloprid and thiametoxam for control of tobacco thrips have become typical throughout the region. Scouting for thrips on seedlings and therapeutic control with foliar applications of insecticides provides limited success in preventing damage. It was originally thought that seed treatments would not likely select for resistant tobacco thrips populations because of the large host range of the pest and the short window of treatment over the year. A survey of tobacco thrips populations from a number of Southern states showed that 57 percent and 65 percent of populations had reduced imidacloprid and thiametoxam sensitivity, respectively. Thirty-seven of the 86 populations showed up to 55- and 39-fold resistance, respectively.

Overall, the results indicated elevated levels of resistance throughout the region from the populations evaluated from Alabama and Georgia. The results of this survey were published in a refereed scientific journal article.

Populations in Florida are currently being assessed using the same treated diet assay method in the previously published study. An assay of the population from the North Florida Research and Education Center in Quincy showed a high level of resistance. Crops grown at the site include peanuts, cotton and soybean, and undoubtedly populations have been heavily exposed to neonicotinoid insecticides.

Several other populations currently are being assayed, including a population from the main campus in Gainesville where the population would not have been expected to have been exposed to insecticides. This monitoring of populations is necessary to understand the levels of resistance throughout North Florida. A number of states have responded by recommending an additional one or two applications of the post-emergent insecticides imidacloprid and/or acephate. Increasing neonicotinoid use to rates necessary to achieve control does not appear to be a viable option. Continued use of neonicotinoids, either as seed treatment or foliar applications, will further intensify selection pressure for resistance. Increased use of insecticides will increase costs and environmental consequences.

Thrips move into fields from nearby areas, but can also migrate long distances on wind currents. Tobacco thrips are capable of overwintering on certain plant species including, but not limited to, common chickweed, rye, wheat and volunteer peanut.

Frankliniella fusca is wingless in its larval and pupal stages. Adult thrips are winged and typically 1-2 mm in length. Females are usually brown or black and the males are yellow, having eight segmented antennae.
Warmer temperatures are thought to increase the thrips’ reproductive cycle, while rainfall has the opposite effect, killing larvae. Most thrips complete their life cycle (egg to adult) in two to three weeks. Larval populations were found to be highest in late June. The thrips can become infected with Tomato Spotted Wilt Virus (TSWV) only during the two larval stages, but once infected they can vector the disease throughout their adult life.

Planting denser crop rows (such as twin rows in peanut) with a higher plant population, compared to the lower plant population associated with a single-row pattern, has been shown to reduce thrips injuries in a field setting.