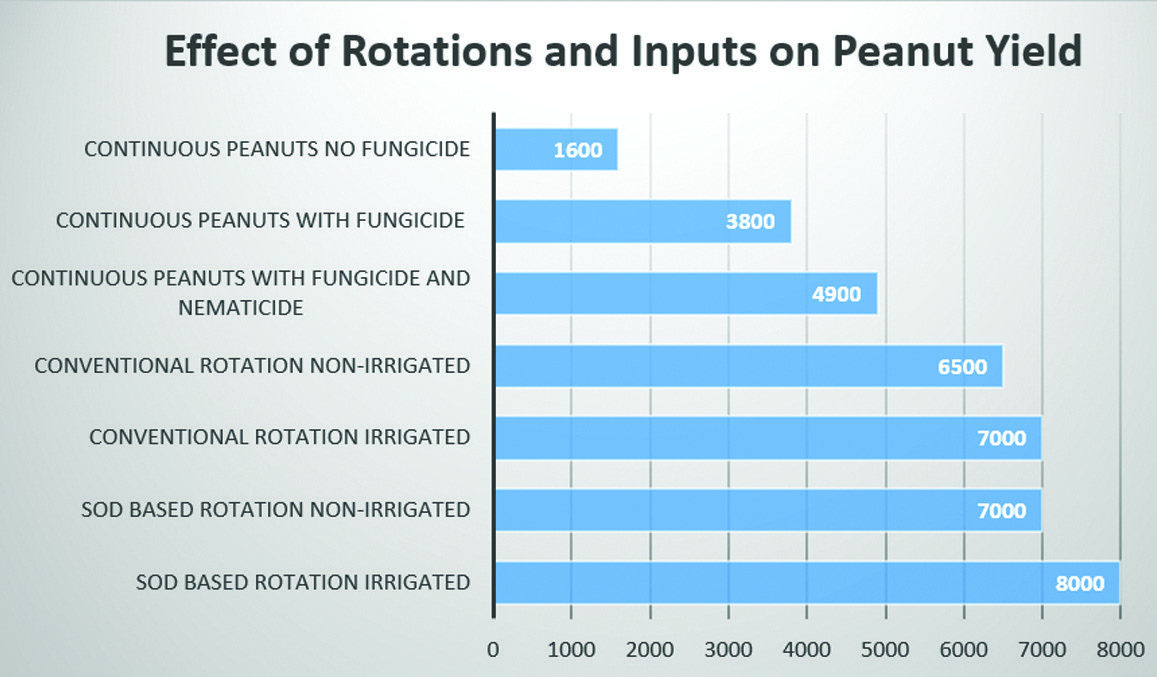 The past two decades have seen major changes in cultural practices in the peanut/cotton cropping systems. Among these changes are consolidation of farm units, increased irrigation, reductions in corn/soybean acreage, increases in cotton production and changes in support programs for peanut.

Technological changes have also been rapid and include an almost 100 percent adoption of transgenic use for corn, soybean and cotton and planting date changes for peanut based on tomato spotted wilt virus control. Furthermore, conservation tillage is now widely adopted in the Southeast, according to a National Crop Residue Management Survey.

Crop Rotation May Determine Profitability In 2015 It is not a good idea to produce peanuts on the same land for three to five years in a row because of the longterm pest build up and reduced peanut yields.

At the North Florida Research and Education Center-Quincy, we have intentionally planted continuous peanuts for four years to establish high levels of disease for fungicide research trials. These trials are on the same soil, a Dothan sandy loam, as crop rotation studies with peanuts after a year of cotton and two years of Bahia grass. In the same field, this is compared to a conventional rotation of two years of cotton and one year of peanuts under conservation tillage, with and without irrigation.

A Look At Yields

In a year such as 2015, when crop market forecasts are down, high yields from good crop rotation, as noted above, may be the only way to return a profit.

Other less obvious factors have also prompted the need for the change from simple rotations to more complex rotations. Until recently, yields for peanut had reached a plateau, partly because short, two-year rotations can become susceptible to classic problems similar to monocultures, such as stagnant yields, soil degradation and pests and disease surviving and adapting to the rotations. It is thus essential to find alternative cropping systems that can increase yields and simultaneously enhance soil quality and conservation and promote environmental stewardship.

An excellent system to achieve higher yields and environmental benefits is a four-year sod-based rotation, which includes bahiagrass for two years, followed by one year of peanuts, and then a year of cotton, in place of the traditional peanut/cotton rotation. To increase economic returns in the overall system, livestock can be integrated into the system. Numerous benefits can be obtained by including bahiagrass and livestock.

Bahiagrass is a good choice for a perennial grass in the Southeast because it is not new to most farmers. It is drought tolerant and can be grown on a wide range of soil types, including sandy soils. Its nutritional value, including crude protein, acid detergent fiber and neutral detergent fiber values is comparable to other grasses, and it can be grazed or harvested for seed or hay. This article is an introduction to the many benefits of adopting sod/livestock/ peanut/cotton farming systems, plus some of the challenges that have prompted the need to adopt the livestockbased cropping system.

Farmers tend to specialize in crops because of environmental constraints, economics, infrastructure or because that is what’s been grown for many years. Like all successful ventures, farming is dynamic and must respond to changing environmental and economic conditions.

While conservation tillage greatly reduces soil degradation, including perennial grasses will improve soil health and consequently improve crop growth. Bahiagrass is a non-host to several plant pathogens and nematodes. Synergistic effects are achieved with a combination of improved soil health resulting in enhanced plant growth. In turn, this leads to a better ability to outcompete weeds and an ability to better tolerate diseases. Reduction in the use of synthetic chemicals is in accord with environmental stewardship but, more important to growers, a necessity to reduce production costs.

Provide A Buffer To Failures

Early in U.S. agricultural history, mixed livestock and crop production were the norm. While mixed farming was necessary for early farmers, the last half of the 20th century was a time with increasing emphasis on commercial farming, and an increase toward specialization. However, changing economic, technological and ecological values have made it necessary to re-visit diversified crop/livestock enterprises. Integrated livestock/crop farming systems feed into each other; the products from one enterprise can be used as inputs for the other enterprise.

Additionally, diversified cropping can provide a buffer against unpredictable weather, such as droughts and hurricanes and also reduce economic risks by reducing yearly variations in returns and also increase the total income.

An interactive business model that evaluates the economic feasibility of a fouryear livestock/peanut/cotton/sod rotation can be found at the following website: http://nfrec.ifas.ufl.edu/programs/sod_r otation.shtml. The model shows that returns are three to six fold greater for the fourth year of the integrated sod/livestock/ peanut/cotton farming system compared to conventional peanut/cotton.

There are other advantages of the sod/livestock/peanut/cotton farming systems that go beyond the monetary value. Expansion of cropland coupled with intensification of agriculture have drastically reduced both micro and macroflora and fauna population density and diversity. It is thus imminent that flora and fauna biodiversity be progressively maintained in agricultural farmlands. Sodbased cropping systems can provide niches to preserve biodiversity.

Putting It All Together

Numerous factors interact to bring about the positive outcome for implementation of the sod-based peanut/cotton cropping system. This system is applicable under different climatic conditions and soil types.

We recommend growers read our related articles on this subject for details. The articles can be found by visiting the website at http://nfrec.ifas.ufl.edu/programs/ sod_rotation.shtml for more information on sod-based rotation.