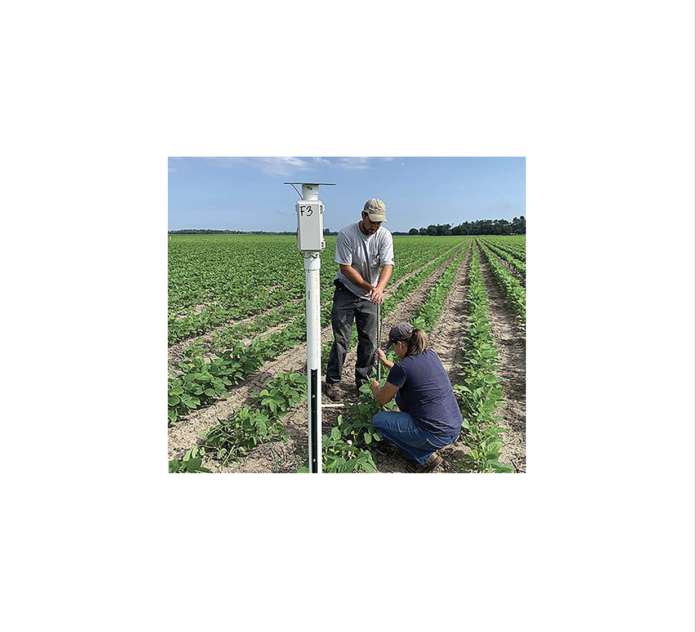 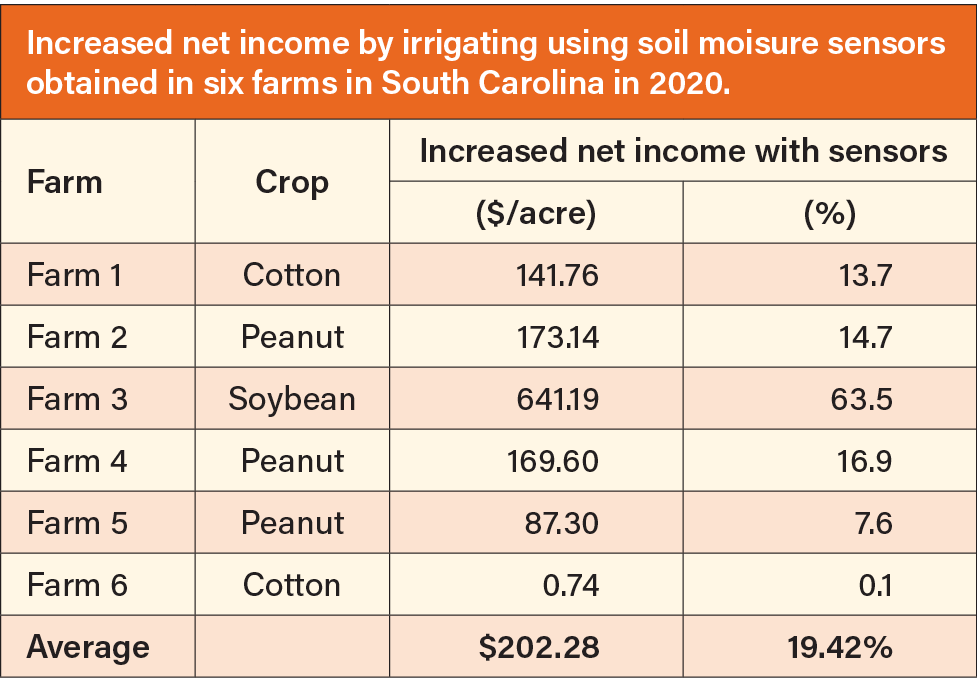 The farmers were trained to irrigate the sensor fields based on the collected soil moisture data using a few simple guidelines. They also were guided through installing and using the app to monitor soil moisture levels on their cell phones.

The technology researchers are using is called the Clemson Water Management System. It was developed by Payero and uses sensors to collect and transfer data over a wireless network.

During the trials, soil moisture sensors were installed at four depths – 6, 12, 18 and 24 inches. Data was collected hourly automatically through a custom-made Internet-of-things (IoT) system, transmitting data to a Cloud server using a cellular network.

Help For Applying At Optimum Rates

Payero and his team will complete the third year of trials in 2022.

“This easy-to-use, affordable soil moisture monitoring system will help growers enhance water-use efficiency and increase profits while substantially reducing water and energy use, erosion and leaching of chemicals such as pesticides and soil nutrients,” Payero says. “It also will help growers apply water at optimum rates where needed.”

Joe Oswald is a fourth-generation farmer at JCO Farms in Allendale County. His family farm is participating in the study. They grow peanuts, corn, soybeans, cotton, oats, rye and sorghum, as well as run 150 head of Angus cattle. Because this is a study, farmers and researchers are learning as the research progresses.

Oswald says in 2021, they were fortunate in that they didn’t have to run irrigation much on peanuts, cotton or soybeans.

“Because corn requires more water, we had to water it earlier in the summer when conditions were dry. As for watering based on sensors we have in our soybeans, we irrigated when the moisture got to the threshold of -40 kPa.”

Oswald is learning how to adjust his system to adapt to crop irrigation requirements. PG

Q: What are the benefits of monitoring soil moisture?

A. The evapotranspiration rate of the crop, the rainfall pattern and the soil type combined determine the timing and amount of irrigation that needs to be applied to avoid crop stress and produce high yields. Since weather conditions are unpredictable, measuring soil moisture is one of the ways to properly determine irrigation timing and amount.

Measuring soil moisture can help save water, reduce energy costs, increase yields and protect the environment. Excess irrigation will increase the cost of production and can have negative environmental effects such as runoff, waterlogging and leaching of soil nutrients and other chemicals that can eventually contaminate water sources and reduce yield. Insufficient irrigation can result in crop stress and reduced yields.

Although it is common for farmers to estimate soil moisture by looking at the crop for visible stress or feeling for soil moisture by hand, it can be measured or monitored more effectively and accurately using a variety of commercially available monitoring systems, some of which provide continuous data collection.

Q: What is a soil moisture monitoring system?

A. A soil moisture monitoring system is a combination of devices that can perform one or more of the following functions: sense soil moisture, read/store data, transmit data to a computer, which helps organize, visualize and interpret the soil moisture data.

A soil moisture monitoring system can be divided into the following five components: (1) the soil moisture sensing probe, (2) the power supply, (3) the data collection device, (4) the data transmitter, (5) the base station.

Q: What is the soil moisture sensing probe?

Q: What is the power supply? 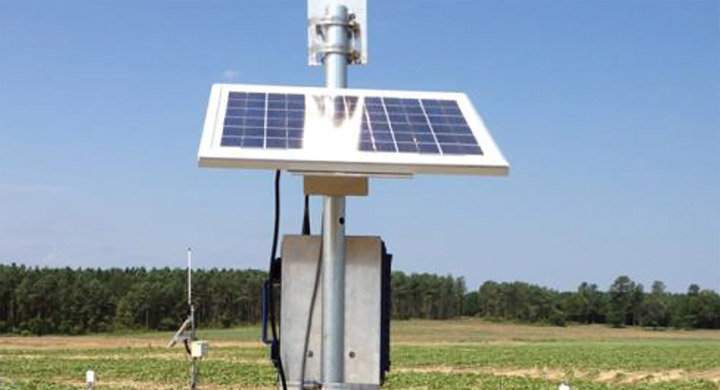 A. Since most current soil moisture monitoring systems rely on electronics, a reliable source of electricity is required. Most systems have been designed to operate in remote locations where electricity is not available. Therefore, they usually operate with power supplied by batteries. Some systems can operate for months using small AA batteries, but others need more power and rely on larger batteries that are recharged with solar panels.

Q: What is the data collection device?

A. Although some sensors, like tensiometers, have a manual readout to directly read the soil moisture (tension), most probes produce an electronic signal, such as resistance or voltage, that changes with soil moisture and cannot be seen directly. Therefore, some kind of data collection device is needed to obtain the electrical output from the sensor(s) and convert it to soil moisture or some other unit that is meaningful to the user. Data from the sensor can be collected manually or automatically. For manual data collection, the user must go to the field and connect the portable readout device to the soil moisture probe installed in the field.

For applications requiring frequent data collection or for convenience, data collection can be automated using an electronic datalogger. A datalogger is a type of computer connected to the sensors that can be programmed to collect, store and/or transmit data at regular time intervals ranging from seconds to days. Usually, the logger stores the date and time corresponding to the soil moisture reading from each sensor. Some dataloggers have a screen for viewing the data on-site and others do not. 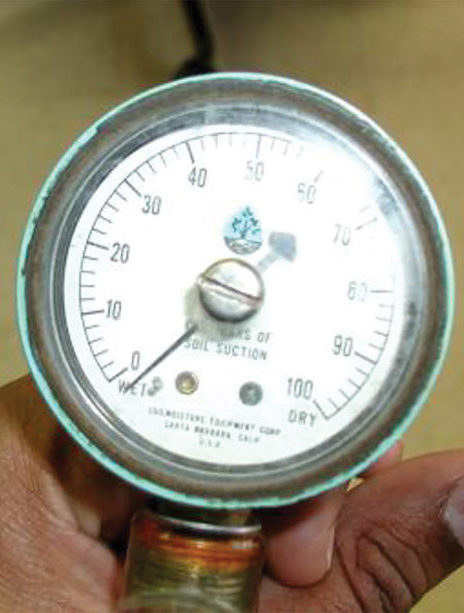 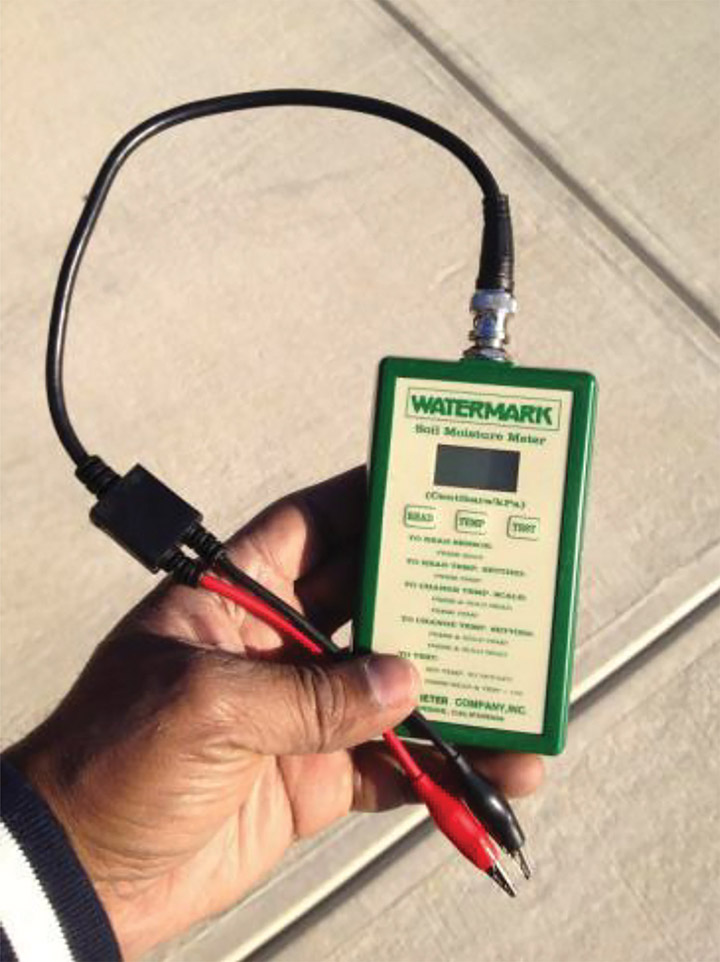 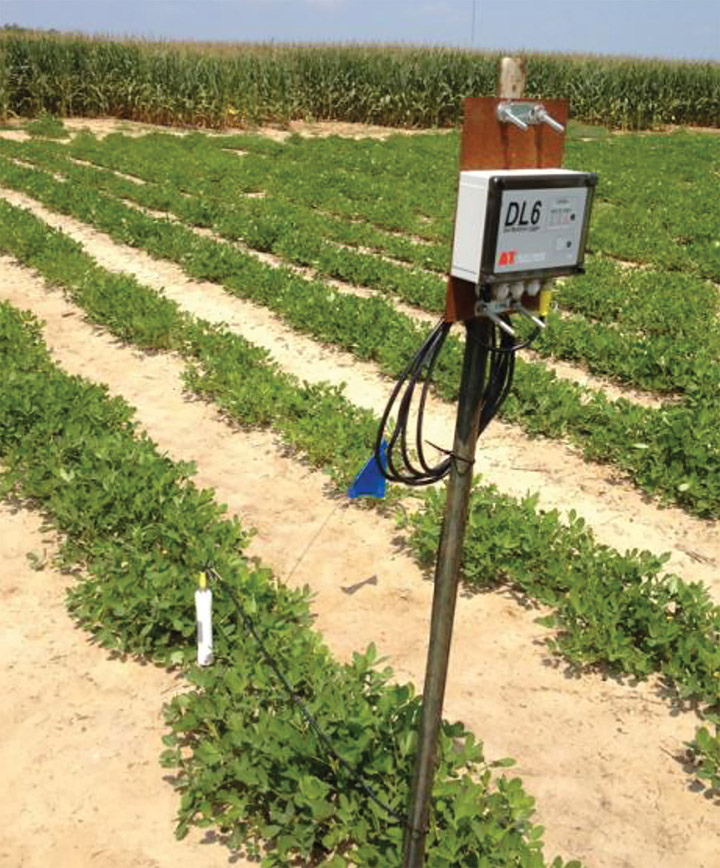 Q: What is the data transmitter?

A. Once the datalogger collects and stores the soil moisture data, the next step is to send the data to a computer where it can be further processed. If the data is not needed to make decisions at the same time as it is collected (in real time), an option is to store the data in the datalogger, and periodically, such as weekly, the user can connect a computer to the datalogger and download the data to the computer. If the data is needed in real time, it can be transferred to a computer using either wired or wireless communication. Wired communication is just linking the logger and the computer with a wire connection, which could be adequate for short distances. In most cases, wireless communication is more practical. 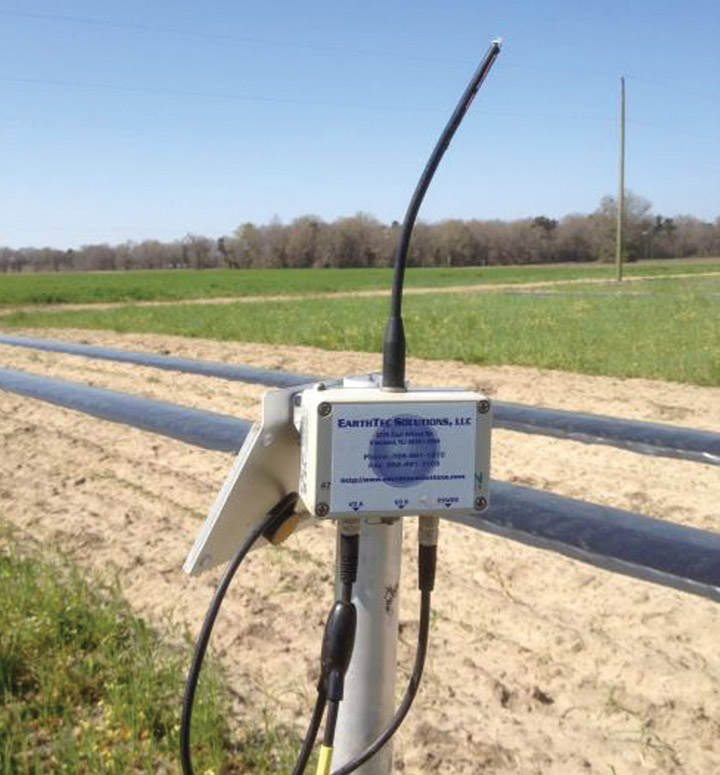 Wireless communication can be done either via satellite, radio or cell phone. Each of these types of communication options would require special equipment, such as a radio transmitter, a satellite transmitter or a cell phone modem. One or several repeater antennas are also required to transmit the signal, depending on whether there is line of sight between the datalogger and the computer, as well as the distance involved. For satellite and cell phone data transmission, the user normally would need to subscribe to a monthly data plan, which represents an on-going cost in addition to the initial investment cost of purchasing the system.

Q: What is the base station?

A. The base station is usually a computer equipped with a data receiver of some type, such as a modem, radio or satellite receiver. The computer is also equipped with software needed to communicate with the datalogger to download the data. Some systems also send the data to an external website. Companies selling soil moisture monitoring systems usually have their own software. The software helps the user download, organize, view and interpret data and create reports, among other functions. 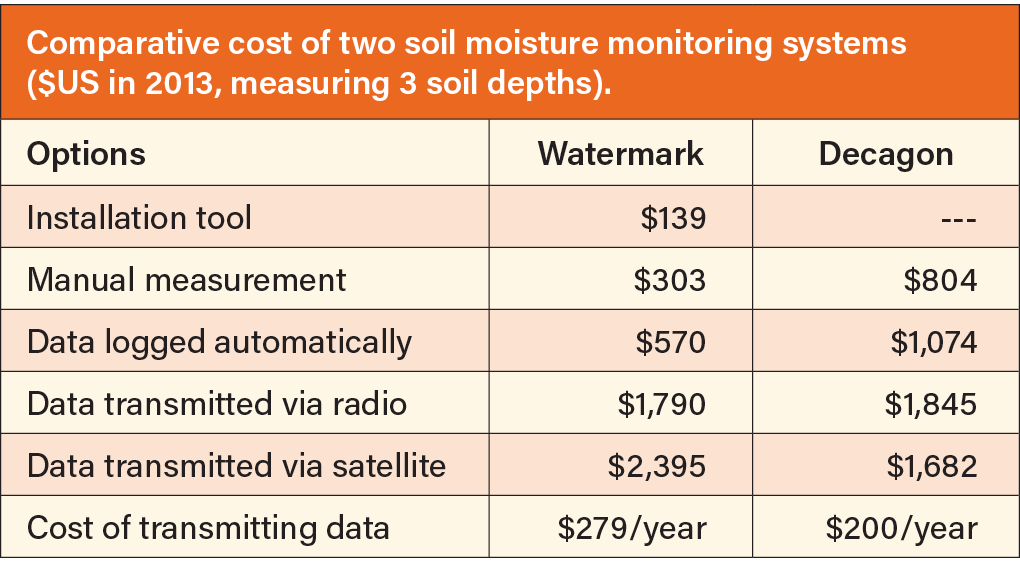 Q: What is the investment cost?

A. The cost of a soil moisture monitoring system can vary significantly depending on the company, the number of sensor depths required, the data transmission option and other options.

Q: What are the barriers to adoption?

A. Adoption of soil moisture monitoring systems by farmers is limited by a lack of information and training, difficulties in installing and calibrating the sensors in the field and difficulties involved in downloading and interpreting the data. Cost can also be an issue for some of the systems, although there are some very affordable systems available. Another problem has been that sensors installed in the field can interfere with farming operations. PG