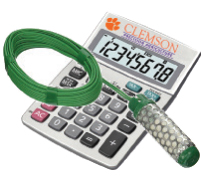 Increase water-use efficiency with the aid of sensors for irrigation scheduling.

Without timely rain or irrigation, these inputs would be wasted. Rainfall or irrigation also lowers soil and canopy temperatures, which allow for normal peg development and reduces aflatoxin risk.

Using an irrigation scheduling tool is a better way to meet crop water demand than using the “rule of thumb” growth stage method or the standard checkbook method. Using a method to schedule irrigation to ensure the crop has the moisture needed to grow properly will reduce plant stress and maximize yield and quality. It also reduces the likelihood of over-watering, which can reduce yields and cost money.

The second category, which are soil water tension sensors, such as gypsum blocks and Watermark sensors, measure the force that the plant roots must overcome to extract water from the surrounding soil particles.

These sensors provide readings in units of kilopascals (kPa) or centibars (cbar). Several differences exist between the two categories of sensors including price, accuracy, recurring subscription costs and telemetry or how data is accessed. However, both categories are suitable for irrigation scheduling in row crops.

The following are commonly asked questions in regards to soil moisture sensors:

Q. How many moisture sensors do I need?

Furthermore, if a particular system takes several days to make one revolution, consider placing sensors at the start and stop of the irrigation cycle to determine if the system needs to continue on to another irrigation cycle at completion of the prior cycle.

Q. Where do I put my sensors within the field?

A. Several factors should be considered when placing sensors in the field to ensure a representative reading will be obtained. Consider soil texture differences; try to manage irrigation based on the soil texture that represents the majority of the field.

Avoid putting sensors in areas that are more susceptible to drought or hold water during the growing season.

If yield data is available, yield maps can be used as another tool to evaluate areas of the field to avoid or try to stay in with placement. Try to place sensors in the field after planting and in areas where a representative stand exists. Avoid traffic rows and minimize damage to plants when installing sensors.

Due to the limitations on irrigation sprinkler packages on center pivot systems avoid placing sensors near the center point of the system. It is recommended to try to install sensors a tower or two from the end of system to ensure irrigation uniformity.

Q. Do I install sensors in the row or row middle?

Q. How do I know when to irrigate based on the soil moisture sensor?

Ongoing research at Clemson University is evaluating sensor thresholds in multiple crops to develop recommendations based on South Carolina soil textures and crop.

If soil water tension or Watermark-type soil moisture sensors are being used to schedule irrigation, Clemson University has a web-based application, accessible with a smartphone or computer, to take sensor readings and assist in making irrigation decisions based on predefined or manually entered thresholds.

The web-based calculator can be found online at https://precisionag.sites.clemson.edu/calculators or www.irrometer.com/thresh.html.

2022 ag outlook: Sale prices up, costs for SC farmers, too

Doing The Math On Fertigation