Effective seed treatments are critical to a good stand. In 2020, one treatment improved germination rates.

The questionable seed quality going into the 2020 season was well known, given the problem with aflatoxin in 2019. What was discovered as seed labs conducted germination tests prior to 2020 planting was that the seed treatment would make a significant difference in in the viability of those seed.

Dynasty PD has been the primary seed treatment for a number of years, and more recently Rancona V PD has looked good in trials, says University of Georgia plant pathologist Tim Brenneman.

“Rancona and Dynasty PD both contain several fungicides; however, they do not contain the same fungicides. Many different pathogens can attack peanut seed and seedlings. Some are seedborne, and some are soilborne. No single fungicide covers that wide spectrum, so combinations of active ingredients are needed.”

According to Brenneman, the range of pathogens that can affect peanuts include Pythium, Rhizoctonia and Rhizopus, but the primary problem in recent years has been Aspergillus niger.

“Aspergillus species are well adapted to the hot, dry conditions often present late in the peanut season,” he says.

As expected, based on the high levels of aflatoxin in the stored peanuts from 2019, A. flavus contributed to the lower germination rate found in seed lots. However, what was unexpected was that seed lots treated with Rancona V PD resulted in an increased germination rate than was obtained with no treatment or with Dynasty PD. In both plated tests and in grow-out trials, Brenneman and other researchers found results to be similar to the germination data.

“Aspergillus flavus and A. niger were big players in the seed quality problem, and both of these are becoming resistant to the group of fungicides found in Abound and Dynasty. In spring 2020, the seed industry rapidly switched to Rancona seed treatment, which helped reduce the problem, but there were still issues with both seed and bad weather.

“Seed treatment fungicides help us manage the fungi that attack seed and seedlings. They are essential,” Brenneman says, “but do not expect miracles. They cannot turn bad seed into good seed.” 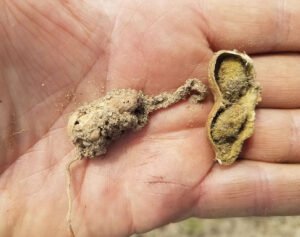 UPL marketing manager Andy Hurst says with Rancona V PD being a newer product, they were working from a production-limited availability in early 2020.

“We did not expect the incredible demand, but it was a matter of the industry having the seed it needed. Going into this season, we scaled up production.”