UF Student Is A “Cultivator” 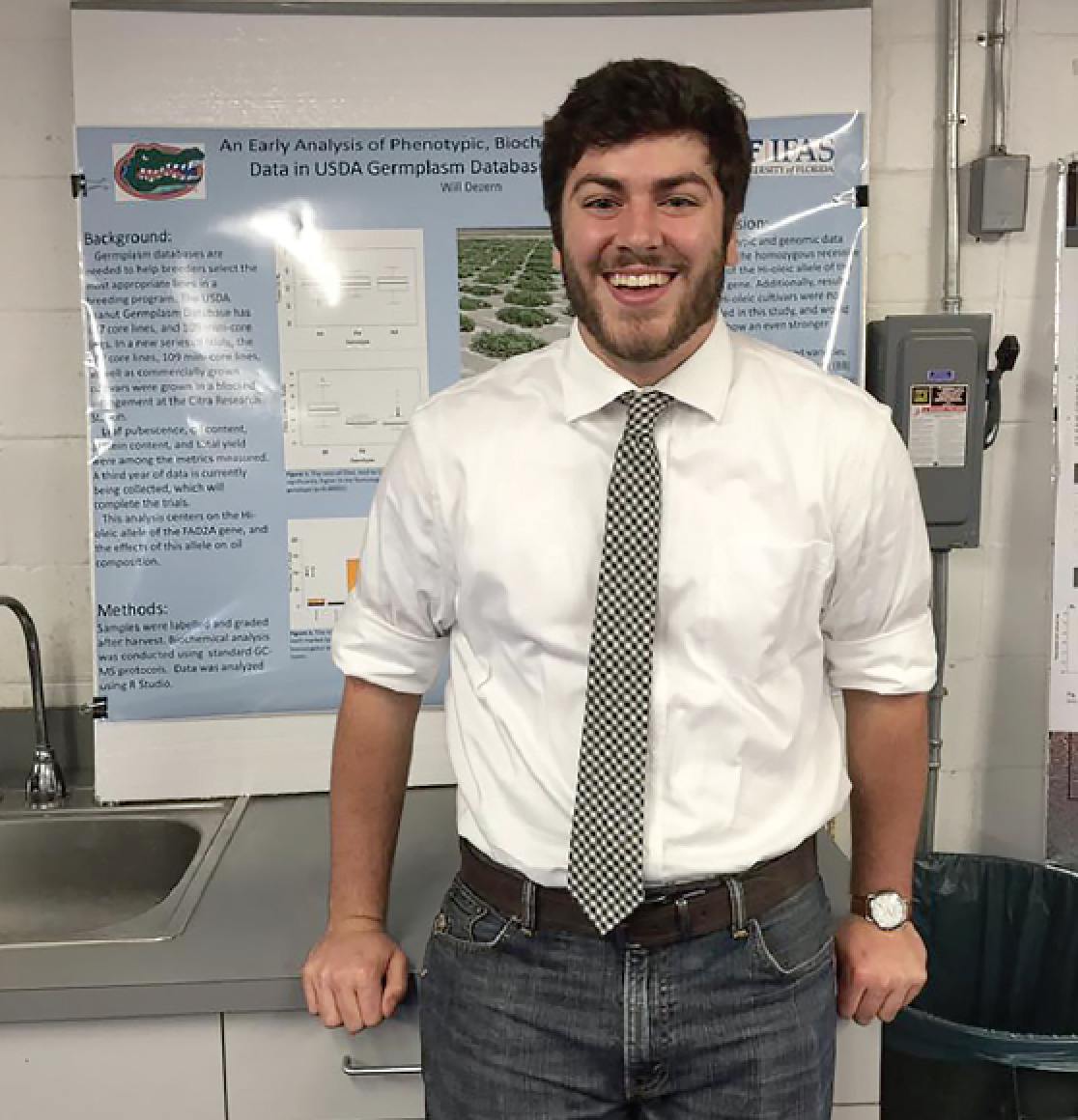 Will Dezern, who hopes to provide an updated database for peanut breeders, receives prestigious honor.

A University of Florida College of Agricultural and Life Sciences student who researches how to improve peanuts has been named as UF’s first Cultivator for the 2016 Farm Foundation Round Table.

Will Dezern, who recently earned a bachelor’s degree in plant science from UF CALS, participated the week of June 6 at the discussion forum in Louisville, Ky., where he presented a poster on his research. Dezern is one of six students, called “Cultivators,” selected nationwide to attend the forum.

Dezern’s research focuses on the phenotypic, biochemical and genetic characterization of peanuts. Through his research, he hopes to provide peanut breeders a standardized, updated database to reference and compare peanut lines for their work.

“One area in particular I have focused on is the use of genetic markers to select for increased oleic acid content in peanuts,” he says.

Farm Foundation is a non-advocacy, public charity that promotes objective analysis, constructive dialogue and innovative ideas to build a deeper understanding of issues critical to the future of agriculture, food systems and rural communities. The foundation does not lobby or advocate. The Cultivator program came about after Farm Foundation leaders invited six graduate students from land- grant universities to be guests at the June 2013 Round Table meeting. When committee members saw the value of student participation, the steering committee recommended formalizing the Cultivator program. The term “Cultivator” was chosen to denote that the group is cultivating new leaders in agriculture.

“I am excited about the opportunity to hear from agricultural leaders from around the country,” Dezern says.

“Sometimes it is easy to be focused on one area of work, so I look forward to gaining a better understanding of the state of the industry as a whole. I’m honored to have been chosen to attend the Farm Foundation Round Table event, and I hope to come back with new ideas and perspectives.”

Dezern was nominated for the honor by UF’s College of Agricultural and Life Science’s Dean Elaine Turner.

“He is truly exceptional,” Turner says. “In working with undergraduate students in CALS, we stress the importance of learning outside the classroom and encourage everyone to get involved in something, such as volunteer work, research, study abroad, internships or student organizations. Now and then, we have a student like Will who fits all of these into his four-year plan. Participation in the Cultivator program will give him the opportunity to not only share his research with agricultural leaders from around the country, but also make connections that will last a lifetime.”

Dezern will start a master’s degree program in agronomy at UF CALS this fall. After earning his graduate degree, Dezern hopes to work as an Extension agent.