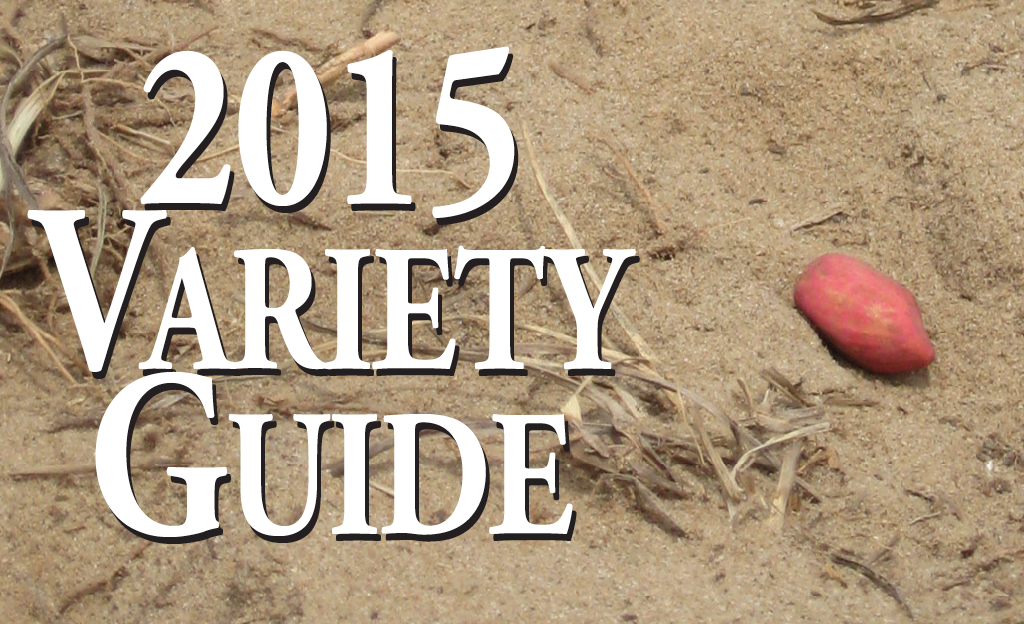 Variety selection is one of the most important decisions in peanut production. Newer varieties have resistance to multiple diseases, including white mold, but the best variety choice remains those that will achieve a rapid, uniform stand and provide good yields and grades over a wide range of growing conditions.

Careful consideration should go into this part of your planting decision. Many factors affect the selection of what varieties to plant including field history, irrigation, planting and harvest capabilities, seed availability and quality and marketing. On a field-by-field basis, weigh all of these factors to determine how the variety may fit into your situation and on your farming operation.

Study the variety descriptions and the trial data. If you are thinking of planting a new variety, follow up by asking questions of researchers and other growers. Consider your own on farm trial of a few new varieties.

Florida-07: This medium-to-late runner market-type peanut was released from the University of Florida in 2006. It has shown excellent yield potential with good grades. Seed are larger and, for this reason, gypsum is recommended for additional calcium. It has good-to-excellent resistance to tomato spotted wilt virus (TSWV), some white mold resistance and tolerance to leaf spot. Florida-07 has high-oleic oil chemistry with good-to-excellent roasting, blanching and processing characteristics.

FloRunTM ‘107’: This is a medium-maturity (135 to 140 days) runner-type variety released by the University of Florida. The seed size of FloRunTM ‘107’ is similar to Georgia Greener, and it produces a high percentage of medium kernels in the grading process. The variety has demonstrated very good yields and grades with good resistance to TSWV and moderate resistance to white mold. FloRunTM
‘107’ has high-oleic oil chemistry. Georgia-02C: Released in 2002 as a new high-oleic runner-type cultivar, Georgia-02C can have later maturity than Georgia Green with seed and pod size slightly larger. This variety has a spreading runner growth habit, with excellent TSWV and CBR resistance. Georgia-10T: A high-yielding, high-grading, TSWV resistant, large-seeded, runner-type peanut variety, Georgia-10T was developed at the UGA Coastal Plain Experiment Station in Tifton. The variety has shown a high level of resistance to tomato spotted wilt virus. Georgia-10T has a spreading runner growth habit, dark green foliage and medium-to-late maturity. It should be an excellent variety for an earlier (April) planting option in the Southeast because of its resistance and maturity.

During three years averaged over multiple location tests in Georgia, Ga. 12Y had significantly higher yield, dollar value return per acre and number of seed per pound compared to Georgia 10T. However, Georgia 10T has a higher TSMK grade than Georgia 12Y. Georgia 12Y is most similar to Georgia 10T in later maturity. Both should be excellent varieties for an early planting date option in the southeast U.S. peanut production area.

Georgia-13M: This is a new high-yielding, higholeic, TSWV-resistant, small-seeded, runner-type peanut variety released by the Georgia Agricultural Experiment Station in 2013. It was developed at the University of Georgia, Coastal Plain Experiment Station. During a three-year period, it averaged over multiple location tests in significantly less total disease incidence and greater dollar value return per acre when compared to other high-oleic, runner-type varieties.

Georgia 13M has a smaller runner seed size. Georgia 13M combines high yield, TSWV resistance with the excellent roasted flavor of Georgia Green and the high-oleic trait for longer shelf life and improved oil quality of peanut and peanut products. Seed will be limited for 2015. Tamrun OL01: A high-oleic Texas A&M release similar to Tamrun 96. Pods and seed are much larger than Flavor Runner 458 and a little larger than Tamrun 96 and OL02. Disease resistance is nearly equal to Tamrun 96. Tamrun OL01 may have higher sugar content than most varieties and has produced hard seed in some situations. This variety is popular in South Texas due to TSWV resistance. Tamrun OL07: This medium-to-late maturing high-oleic Texas A&M release has improved disease resistance compared to Tamrun OL01 and OL02 and FR 458. It yields similarly to these varieties in disease-free situations, but significantly higher in the presence of TSWV or Sclerotinia blight. Seed size intermediate between Tamrun OL02 and OL01.

Tifguard: Developed by USDA’s Agriculture Research Service in Tifton, Ga., Tifguard has resistance to nematodes so as to be characterized as “near immunity,” and it offers good yields and grades, especially in places where there would be no yield from other varieties. It offers good resistance to TSWV and maturity is similar to Georgia Green. TUFRunnerTM ‘297’: Developed by the University of Florida, this variety is an extra-large seeded runner-type peanut with high-oleic oil chemistry. Released in 2014, this variety has demonstrated very good resistance to white mold, good resistance to TSWV, but is susceptible to leaf spot. Yield and grade have been excellent. It has a prominent center stem with semi-prostate growth habit. Seed supply will be limited to production of Foundation and Registered seed in 2015.

TUFRunnerTM ‘727’: This is a medium to medium-late maturing (135-145 days), high-oleic, runner market-type peanut cultivar with very good resistance to white mold, resistance to TSWV and some resistance to late leaf spot. It has a prostrate,
runner growth habit with large vines and large runner seed size. Yield and grade of TUFRunnerTM ‘727’ have been excellent.

Bailey: Released by NCSU, Bailey is a medium to largeseeded and high-yielding Virginia-type peanut. It has produced high yields across multiple years and locations, which is an indication of good tolerance to fluctuations of weather and growth conditions. Bailey has a growth habit intermediate between runner and bunch types, bright pods and tan kernel color. More importantly, it is resistant to TSWV and thrips,
and it matures in approximately 145 DAP, but holds its pods much better than CHAMPS. CHAMPS: CHAMPS is a large-seeded Virginia-type peanut variety with a runner growth habit. It is an early maturing variety. Yields at early digging (135-140 days after
planting in Virginia) are high, and pod size, shape and color are suited for in-shell market. If an early frost advisory is in effect, CHAMPS can be harvested 10 days earlier than NCV 11 with no reduction in yield. CHAMPS is less susceptible to TSWV than most Virginia-type cultivars. CHAMPS is susceptible to CBR and Sclerotinia blight. High yields and favorable pod characteristics have been observed across years and
locations and, similar to Bailey, showed good tolerance to growth factors.

Florida Fancy: This is a medium-maturing (130 to 135 days) Virginia-type variety released by the Florida Agricultural Experiment Station. Florida Fancy has about 85 to 95 percent fancy pods and is similar in seed size to the typical Virginia- type varieties NC-V11 and Perry, but is not as large as Gregory. The growth habit resembles runner varieties. Its resistance to TSWV is better than that of Georgia Green, and its reaction to white mold and leaf spot is similar to that of Georgia Green. Pod yield of Florida Fancy has been very good, especially in sandy soils.

Georgia-08V: A high-yielding, high-oleic, TSWV-resistant, large-seeded, Virginia-type variety, Georgia-08V was developed at the UGA Coastal Plain Experiment Station, Tifton. The variety has shown a high level of resistance to TSWV. Georgia-08V combines high yields, high TSWV resistance and the high-oleic trait, which is needed for the longer shelf life of the in-shell market, with medium maturity into a large-seeded, Virginia-type peanut variety.

Gregory: Gregory has a growth habit intermediate between runner and bunch types. Maturity is similar to NC-V11 (145–150 DAP). This variety produces an exceptionally
high percentage of ELKs and Fancy pods. Due to the large seed size, Gregory has a high soil calcium requirement, which may result in reduced seedling vigor if seed are produced under conditions with limited calcium uptake. It has medium resistance to TSWV.

Perry: Perry is a high-yielding, large-seeded and CBRresistant variety. Perry is less susceptible to Sclerotinia Blight and Web Blotch than other Virginia-type varieties,
but tends to have high susceptibility to TSWV. Maturity is approximately 14 days later than NC-V11. Growth habit is intermediate between runner and bunch types.
Perry has a pink seed coat and good pod color. Fancy pod and ELK percentage is slightly lower than other varieties.

Sugg: Released in 2009, Sugg was developed at the North Carolina State University to be resistant to multiple diseases. It has resistance to TSWV, CBR, Sclerotinia Blight and early leaf spot. Sugg has an intermediate runner growth habit and the color of the seed coat is pink. Sugg produces high yields and has larger kernels than Bailey. It also has good blanching and flavor characteristics.

Titan: Titan is an extra large seeded peanut with an exceptionally high content of jumbo pods and super extra-large kernels. It is suitable for in-shell, gourmet and green boiling products. Yields are relatively low if not irrigated. Maturity is considered early (only five days later than CHAMPS). This variety is moderately susceptible to susceptible to TSWV, CBR and Sclerotinia blight. Wynne: A variety tested as N08081olJC, Wynne was released by North Carolina State University in 2013. This variety resembles Sullivan, which Wynne is related to through a Bailey sister line. Wynne has partial resistance to early leaf spot, CBR, Sclerotinia blight and TSWV and has the higholeic characteristic. The percentage of jumbo pods is 68 with 21 percent fancy pods. Seeds have a pink seed coat and average 1051 mg seed1. Just like Sullivan, Wynne has yield and maturity similar to Bailey, but significantly higher than CHAMPS, Gregory, NCV11, Perry and Phillips. Seed may not be sufficient until 2015 planting season.

OLin: Released from Texas A & M University in 2002, this high-oleic line is comparable to Tamspan 90 in growth habit, maturity and disease resistance. Yield potential is consistently five to 10 percent less than Tamspan 90. Pronto: A large-seeded Spanish variety, Pronto has a growth habit typical of Spanish varieties, except that it exhibits more yellow-green color. Pronto has yields and grades similar to Spanco.

Spanco: A high-yielding, Spanish-type variety released from Oklahoma State University, Spanco is early maturing (10 to 14 days earlier than most other Spanish varieties). It has good yield potential, but does not possess the pythium pod rot or
Sclerotinia blight resistance found in Tamspan 90. Tamnut OL06: This Texas A&M University Spanish line is a large-podded, large-seeded higholeic variety with potential use in the runner market. Maturity and yield potential are similar to Tamspan 90. Initial yield results in runner production systems appear less than Flavor Runner
458, but with earlier maturity.

Tamspan 90: Released from Texas A&M University, this variety exhibits typical Spanish growth habit. It is resistant to Pythium pod rot and Sclerotinia blight. Maturity runs about 140 to 145 days in West Texas. It has excellent yield potential.