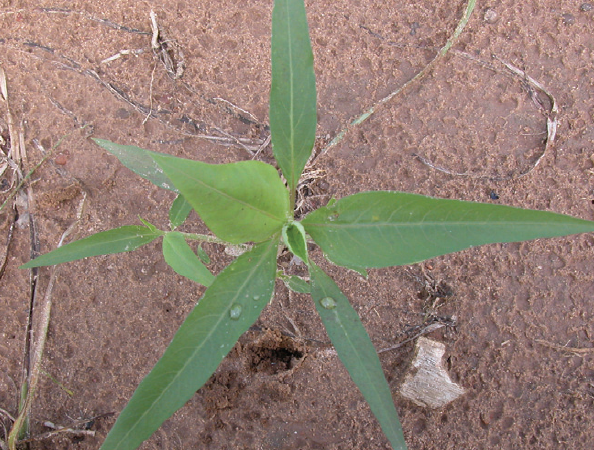 FLORIDA PUSLEY (RICHARDIA SCABRA)
Florida pusley is a low-growing, annual weed species that appears almost prostrate. It can be effectively controlled only with pre-plant incorporated herbicides. Florida pusley has bright green leaves with a distinctive recessed mid-vein. The stems are very hairy and may have a purplish appearance. The flowers are white with six petals in a star-shaped whorl. [divider] TROPIC CROTON (CROTON GLANDULOSUS)
Tropic croton is an upright, branching annual broadleaf with serrated leaves. Tropic croton has a rough hairy stem, but it is not as hairy as the related species, wooly croton. Its gray-brown seed are desired food for doves. [divider] RED MORNINGGLORY (IPOMOEA COCCINEA)
Red morningglory is a relatively common annual morningglory species, but often doesn’t appear until later in the season. The key identifying features are the distinct points on the leaf margin and relatively small red flowers. [divider] SMALL FLOWER MORNINGGLORY (JAQUEMONTIA TAMNIFOLIA)
Small flower morningglory is probably the most common morningglory species in the Southeast. The cotyledon stage resembles a wild radish seedling with heartshaped cotyledons. As it grows, small flower morningglory will stand nearly erect until 12 to 18 inches tall, then it will begin to run. It has heart or spear-shaped leaves and produces small blue flowers in a cluster. [divider] TALL MORNINGGLORY (IPOMOEA PURPUREA)
Similar to other morningglory species, tall morningglory has a vining, prostrate appearance that envelopes the peanut canopy. It has heart-shaped leaves with overlapping lobes at the base and slightly hairy stems. [divider] TROPICAL SPIDERWORT (COMMELINA BENGHALENSIS)
Tropical spiderwort is an annual species similar to common dayflower. It is distinguished from dayflower by the presence of subterranean (underground) flowers. Leaves are spoon-shaped with parallel venation and blue above-ground flowers. Stems are succulent, and the plant re-roots quickly after cultivation. It spreads by seeds. Spiderwort germinates throughout the season, hampering control efforts. [divider] LAMBSQUARTER (CHENOPODIUM ALBUM)
Common lambsquarter is a small seeded annual broad – leaf species particularly troublesome in the Virginia- Carolina region. It is an upright plant, which can exceed seven feet at maturity. Its arrowhead-shaped leaves grow alternately and often have a whitish dusty appearance on their undersides even in the seedling stage. [divider] SPURRED ANODA (ANODA CRISTATA)
Spurred anoda is a troublesome broadleaf member of the Mallow or Cotton family. Its alternate toothed leaves are two to four inches long and sometimes have purplish veins. It produces small, pale blue flowers and a unique fruit that looks like a fancy ribbed pie surrounded by a star.[divider]

HOPHORNBEAM COPPERLEAF (ACALYPHA OSTRYIFOLIA)
Hophornbeam copperleaf is a freely branching annual broadleaf weed with finely serrated leaf edges. Copperleaf has bright green leaves throughout most of the growing season, but these turn a characteristic copper color as the plant reaches maturity in the fall. There is a related species referred to as Virginia copperleaf. [divider] BRISTLY STARBUR (ACANTHOSPERMUM HISPIDUM)
Bristly starbur is an annual broadleaf weed common in much of the Southeast. In addition to the accepted common name, it is also called “goatspur” or “Texas sandspur.” It has rough textured “fuzzy” leaves and an upright but profusely branching growth habit. Its seed form with two sharp pointed prongs that make the mature plant extremely “bristly.” [divider] TEXAS PANICUM (PANICUM TEXANUM)
Texas panicum is an aggressive, relatively large-seeded annual grass, which is common in much of the peanut acreage in the United States. It has wide, almost-frizzy leaf blades and forms numerous tillers. Its vigorous fibrous root system makes clean harvest of peanuts nearly impossible. [divider] WILD RADISH (RAPHANUS RAPHANISTRUM)
Wild radish is thought to be a problem in winter crops, such as small grains and canola. However, wild radish has become an increasing problem in peanuts in recent years. This plant forms a rosette of leaves that looks similar to mustard greens. The leaves have deeply indented lobes and are covered with numerous stiff hairs. As the plant matures, pale yellow flowers are produced on a seed-stalk that arises from the rosette. [divider] WILD POINSETTIA (EUPHORBIA HETEROPHYLLA)
Wild poinsetta is an exotic weed pest spreading in many parts of the Southeast. As a member of the Spurge Family, it has hollow stems and milky, latex-like sap. In the cotyledon stage, it resembles a weak, pale green cocklebur seedling. Mature plants can have numerous leaf shapes even on a single specimen. [divider] PALMER AMARANTH (AMARANTHUS PALMERI)
Palmer amaranth, an annual pigweed, has become an increasing problem because of herbicide resistance in some areas. It can reach heights well over six feet and can be very difficult to control once established. Unlike other pigweed species, Palmer amaranth has a long, slender seed head and a more robust appearance.