A Good Quality Crop Is Needed In 2020 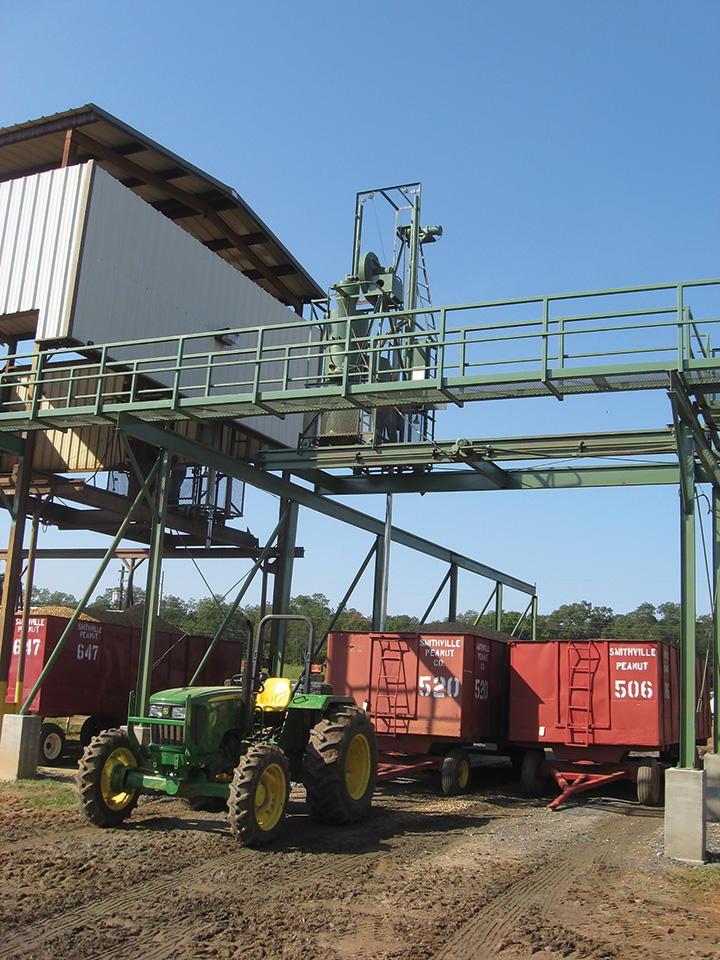 COVID-19 is bringing more stress and worry to the agriculture picture. If there is a positive in this, it is that demand for peanuts and peanut butter will increase as more people are eating at home. The easy-to-use, nutritious, go-to food makes an ideal meal or snack for families staying at home instead of sending the kids to school and going to work. Food banks are also depleted of resources, and empty store shelves abound. Any surplus will likely be taken up, and more will be needed.

Like everyone, peanut farmers are concerned about the coronavirus pandemic and how will it influence the coming crop year, their businesses in general, the total economy and even their family’s health. Farmers were already entering a stressful planting season with low commodity prices, and now they have to contend with the challenges associated with a global pandemic. While doctors and nurses are on the front lines saving lives of those with COVID-19, farmers are working to ensure that our world still has food to eat.

Another worry? Approximately 69% of producers do not have a backup plan to continue current farming operations if they get sick, much less a succession plan if something catastrophic were to occur. Most farms are still single-proprietor or have few family members or employees as part of the operation.

Yet, the current situation has peanut butter demand up, store shelves depleted, and some manufacturers have had to make the decision to place their customers on allocation. Snack nuts have seen a rise in demand as well.

There is still a disconnect between the farmer market and the shelled peanut market. The Southeast’s hot, dry conditions during late season and harvest in 2019 has led to one of the poorest quality crops on record. Aflatoxin and damage are causing failure rates on approximately one-third of lots.

The market has increased from the 40 cents to the mid-80 cents range per pound for Southeast runners. Offers for tight specifications are extremely difficult to obtain. Blanched jumbos have moved from the high 50 cents at harvest time to mid- to upper-90 cents today. One sheller announced an allocation on current crop contracts. 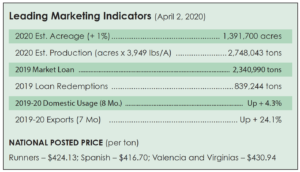 But that’s farming…deliver to the contract and the next owner delivers to their agreed contract as well. Most of the peanuts were sold earlier to manufacturers at 45 to 46 cents per pound. With the 2019 crop in the warehouse, it’s a sheller problem meeting grade.

What about the 2020 peanut crop? Despite coronavirus, farmers should be optimistic. Peanuts are a food product that the world is demanding. Again, the peanut farmer is on the front lines for ensuring a safe, affordable food supply.

Assuming average yields, the result is a total U.S. crop of nearly 3 million farmer-stock tons. Cotton, the largest competitor for peanut acres, is projected to be 13.7 million acres or down less than 1% from last year. However, farmers were surveyed in early March before much was known about how long the economy would be shut down.

More peanuts and less cotton will probably be planted than was indicated by the USDA estimate. With cotton prices as low as 50 cents per pound and the overall commodity markets so low, peanuts at $400 or $425 are still the most attractive option for Southeast growers.

The market desperately needs the 2020 crop to be a good one from a quality perspective. With stronger than expected exports to China, the carryout from the ’19 crop will be lower than projected. 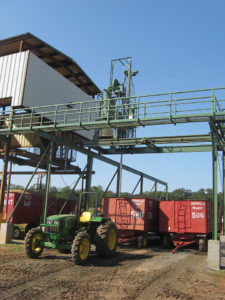 One broker said, “I do not see much if any weakness in the market between now and the year end. If we have poor weather during the growing season or at harvest again, it will only add firmness to the market and/or reluctance to sell forward without a risk premium.”

USDA estimates domestic food use to increase 1.9%, while exports are predicted to go up 10.6%. After seven months, domestic use is up 4.3% and exports are up 24.1%. Ending stocks are down, and that favors the farmers.

China has emerged as a key export market for U.S. peanuts. In 2019, in spite of an ongoing trade war and high tariffs, the United States shipped nearly 97,000 metric tons to China. This was the second-highest total ever and made China the industry’s fourth largest export market, behind Canada, the European Union and Mexico. Shipments have remained strong to start 2020.

U.S. peanut exports continue expanding, up 24.2% over the six-month period and up 24.8% comparing January 2020 to January 2019. China is also buying raw-shelled peanuts, ranking third in shipments behind Canada and Mexico. Raw-shelled exports are up 6.5%, but peanut butter is down 13.8%.

The Price Loss Coverage payment is good for peanut farmers. The average price for peanuts in February 2020 was $410 per ton. USDA estimates the PLC payment will be $123 per ton, which is applied to 85% of the farm peanut base. Payment is not expected until October and is based on previous year’s prices.

Will a fourth round of payments be issued because of unjustified trade retaliation and low prices? That remains to be seen, but Washington, D.C., is squarely focused on COVID-19 at this time.

During this unforgettable crisis, the Trump administration and Congress must be mindful of the agricultural supply chain and workforce for the ability of U.S. agriculture to meet the needs of consumers. These include but are not limited to impacts on accessibility to seed, fertilizer, crop protection products, agricultural labor, equipment, feed and ingredients for food-producing animals, modes of transportation, the availability of required U.S. government inspection services and even daily movement of milk.

The advice this season is to follow the rules, stay safe, plant early and keep the faith.