Export market picks up with shipments to China, Vietnam 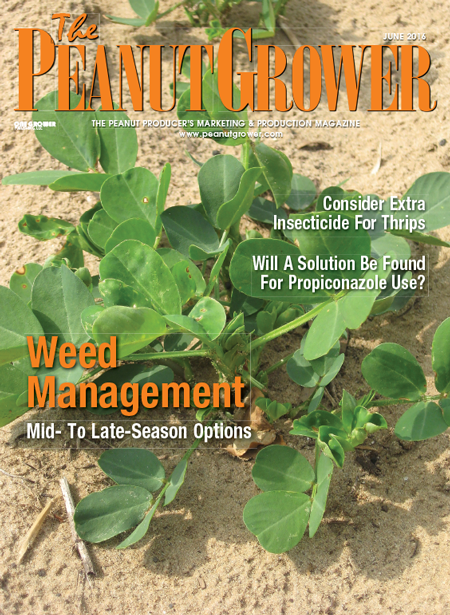 [dropcap]T[/dropcap]he U.S. peanut market is getting mixed signals at home and abroad causing the producers to be concerned as to how to manage under the present peanut program. The Commodity Credit Corporation is successfully moving ahead with selling or exchanging 2014 forfeited farmer-stock peanuts to clear out warehouses. USDA is seeking bids on major purchases to go to nutrition programs in schools and other federal feeding programs and to food banks.

At the same time, exports are suddenly picking up steam, up 37 percent in March 2016 versus March 2015. Argentina has suffered long-term wet weather followed with by early frost. European traders report any price reaction to the Argentine situation has yet to materialize, but the United States is standing by with supplies for Europe. China is slowly increasing buying lots of 2015 farmer stock peanuts for edible oil, plus edible shelled peanuts and is likely to be a net importer, rather than an exporter of peanuts. At the same time, farmers are being urged to cutback because of the large carry-forward of 1,400,000 tons. Farmers are being warned to scout out buying points and shellers that have available warehouse space for storage, so a farmer can get the guaranteed loan of $355 per ton for nine months.

Producers with a peanut base are advised that the Price Loss Coverage (PLC) program could yield about $150 per ton on 85 percent of the farm base less a 6.5 percent budget reconciliation. Peanut producers with no cotton base are fuming that the program failed them and pushed their prices to the lowest level in recent history. Even with the low price, domestic use of peanuts has slowed to only a one percent increase over last year causing some concern. USDA was predicting a three percent increase.

All these market signals come as other commodities remain sluggish to unprofitable…corn at $3.75 per bushel, cotton at 61 cents per pound and soybeans at $10.00 per bushel. What is a peanut producer to do?

The Commodity Credit Corporation exchanged 2014 peanuts for 500 metric tons for roasted peanuts in miniature bags to give to Haitian school children as part of the United Nations World Food Program. It seemed like a great idea, but critics say it could interfere with the Haitian peanut market hurting their own farmers. Exchange Lot No. 2 was an exchange for the production of peanut butter. Exchange Lot No. 3 is also an exchange of farmer-stock peanuts for 3 million pounds of commercial peanut butter.

The 2015 peanut crop has about the same tonnage, 1,100,000 tons, in the loan as 2014 in mid-May waiting to be redeemed or forfeited. Remember in August of 2015, USDA dropped the repayment rate $100 a ton for 60 days to clear out the loan. Could that happen again with warehouses full of 2015 farmer stock? It worked and saved shellers money, but penalized some farmers with market gains.

Peanuts and peanut butter in candy are making a comeback. Growth is even in volume for the first 8 months. As official sponsors of the U.S. Olympic and Paralympic teams for this summer’s games in Rio, Brazil, The Hershey Company is changing the instantly recognizable packaging designs of its leading candy brands to create limited-time special editions that feature red, white and blue elements. This promotion includes patriotic special-edition redesigns on peanut products like Reese’s Peanut Butter Cups, Kit Kat Wafer Bars and Payday Bars. M&M’s has launched a new flavor contest with their 75th anniversary promotion.

Snacking on peanuts is a growing market, up almost 20 percent in usage this year. People on the go are selecting nutritious products, which certainly includes the peanut. New peanut flour in smoothies is also a popular and nutritious treat. Mr. Peanut is 100 year’s old this year and Planters Peanuts is launching a major campaign.

Peanut butter usage is down 5.3 percent, a surprise with present economic conditions, but eating out has increased with lower gas prices and peanut butter is more of a stay-at-home food.

The campaign by the National Peanut Board will target millennials to increase peanut sales as research indicates 50 percent of that population, age 18 to 34, eats peanut butter at least once a week and is more likely to be encouraged to eat peanuts and peanut butter on a daily basis.

The big news on U.S. export peanuts is that China has been on another shopping spree and the United States is shipping peanuts again to China and Vietnam. Sales from the 2015 peanut crop need to continue in the short run as Chinese farmers plant and harvest about the same time as the U.S. farmer. Hectares are likely to increase. Volume buys depend on what happens in Argentina and Brazil. Weather problems in Argentina have caused prices to be withdrawn until sellers can get a handle on volume and quality.

Just like the U.S., comparing other crops, peanuts are more profitable and an acreage increase is expected, some talk about 30 percent. If true, demand for importing would be much less. Some say that consumption is decreasing in Europe because temperatures are rising and firm offers are hard to find.

Export volumes from the U.S. are up 3.8 percent for the year; however March was up an amazing 37.2 percent over March of last year.

For a peanut farmer, it is hard to get excited about growing peanuts so cheap. Thankfully, the peanut program will kick in when prices are drastically low. What is even worse is that other competing commodities are just as cheap, so strategic planning, lowering costs and crop logistics are more important this season. Farmers that are diversified with cattle, produce and other nuts, like pecans, have a better chance of survival. Then, after the summer, hearings on the new Farm Bill will begin. Until then, the biggest worry is the weather.