No Excess In U.S. Supply, But Watch Other Origins 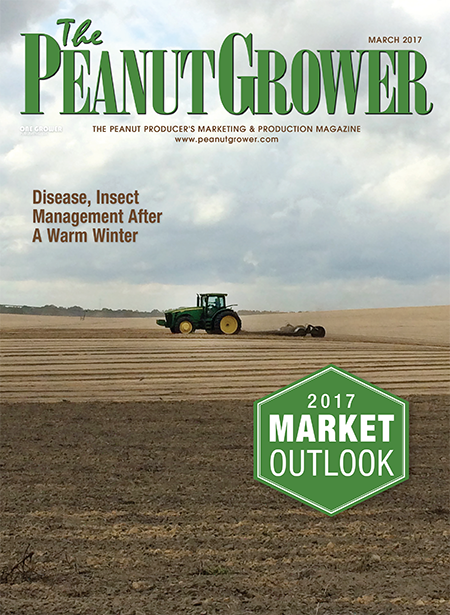 [dropcap]T[/dropcap]he final numbers are almost in on U.S. peanut production from 2016. USDA predicted 2,842,305 farmer-stock tons, while the Federal Crop Inspection Service has counted 2,770,299 tons. The numbers are short of the October prediction of 3,155,100 tons.

The USA is sold on 2016 crop through and until new crop availability next fall. It is important to note that many U.S. suppliers had presold volume into European Union destinations and producing/shipping the required quality has and will be problematic through the year. That means re-milling some stocks to meet quality standards.

Unlike last year, it appears that there is no excess supply in the market that could be sold into the Chinese market for crush. Only low volumes of goods have been sold in comparison to last year, but the Chinese continue to look for crushing material. Oil Crops Outlook
The estimated domestic consumption plus seed for planting next year puts the bar at approximately 2.1 million tons. The estimation of exports for the U.S. crop beginning in August/September is about 750,000 tons. With a production of 2.84 million tons and a demand of 2.85 million tons, there is definitely no surplus of peanuts. The good news is that USDA has the carry-forward estimated at about 840,000 tons and most analysts agree with this figure.

Shellers will be shelling any and all farmer stock to produce any edibles that can be used for marketing; goods not suitable for the edible market, such as those with higher aflatoxin, have been moving to both China and Mexico destinations for other uses.

Usage Numbers
In the U.S. market, December was not a good month for peanut usage. Compared to the same time last year, usage was down 7.2 percent, but for the five months of the new marketing year, peanut usage in the U.S. remains up 1.5 percent. USDA predicted it would be up 1.9 percent for the year. Peanut candy usage was strong in December, up 24.7 percent keeping the year usage up 12.9 percent. Snacks with peanuts were down 25.5 percent versus December last year and is now down 8.5 percent for the five-month period. Peanut butter reports down 6.3 percent in December, but up 3.3 percent for the year.

Aggressive Contracting
In preparation for the new season, shellers have aggressively contracted new crop farmer stock with farmers from $450 up to $500 per ton, with high-oleic varieties earning a $50 per-ton premium. Brokers estimate that about 65 to 75 percent or more of the crop is already contracted for 2017. Some producers were offered premiums for irrigation and seed production and some required deductions to cover transportation costs to the shelling plant.

Going forward, farmers will plant when the soil reaches the required temperature and shellers will be hoping for a good growing season. They would also like the ability to contract the remaining crop at decreased levels, while farmers will hope for increased contracts later.

Increased Acreage
Based on the early contracting levels, it is estimated that an increase in acreage will be approximately 5 to 7 percent, with some estimates at 10 percent or more. Cotton, needed for rotation and also competition for peanut acres, has recently been climbing, and cotton prices are likely to influence acres committed to peanuts. USDA will make their first acreage estimate on March 31.

Markets Abroad
One analyst notes that India and China have completely changed the way the world looks at global peanut supply and demand. Chinese buying has dictated crop price movement of other origins for the last five years. China has a large crop this year but it will be used for domestic crush to meet their insatiable demand for oil. They also have a growing domestic salting/roasting business in China. A growing middle class is also pushing demand of peanuts and peanut products.

Even as China produces the world’s largest peanut crop, their growing demands will influence other crop origin price developments for the coming years. China will continue to scour the globe for the cheapest material to supplement their domestic market. A hiccup in the Chinese or Indian peanut markets because of a crop production issue can immediately surprise other origins as demand can quickly outstrip supply.

It appears that any excess of U.S. peanuts can be sold to the Chinese market for crush, which effectively puts a floor on the U.S. market. Shellers/farmers also have the mechanism of the USDA loan program to manage supply/demand for the markets. Remember though, the government does not want forfeits. Focus On Yield And Quality
Many domestic and export buyers have taken some coverage for the new crop and will play a waiting game now to see development of crops in both Argentina and the United States. European prices for both Argentine and USA new crop are approximately $1,550/MT raw and $1,700 to $1,750 blanched. If China, India and Argentina have bumper crops, China will not likely keep buying U.S. peanuts and another surplus will hit the warehouses.

The average yield per acre has already started to slide downward, some caused by weather and some caused by planting peanuts behind peanuts. Pay attention to rotation and plant to maximize program payments to help cover costs. The world demands more quality peanuts, let’s make it happen.