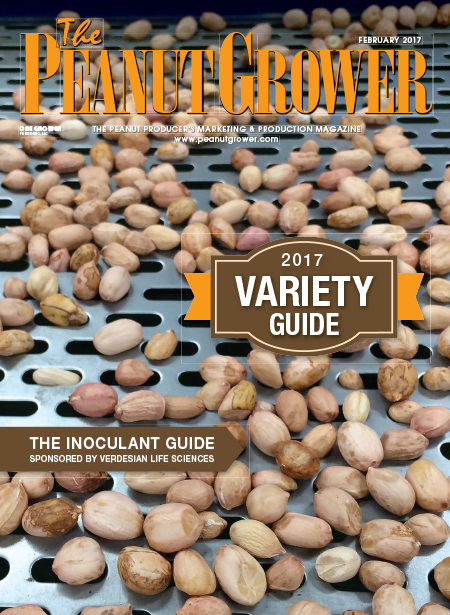 [dropcap]D[/dropcap]own on the farm, producers are somewhat optimistic as domestic and export demand for peanuts remains strong. Other commodities do not produce such optimism, but prices have improved since Trump was elected President. Peanut producers need a strong crop for rotation.
Early indications are for an acreage increase. The first estimate will be issued by USDA on March 30. Contracts for 2017 peanuts were $475 per ton in the Southeast, $100 per ton higher than last season. Shellers report a good response; however, some shellers are offering that price on only a portion, such as the first 4,000 pounds per acre or one-half last year’s production. For uncommitted 2016 peanuts and some 2017 peanuts, contracts were being offered giving the farmer the opportunity to sell his peanuts when shelled market prices increase or decrease or ride the market. One sheller offered a flex contract at $400 per-ton base price that equaled 52 cents per-pound shelled price. For each one-cent increase in price above that, add $ 13.50 per ton up to a maximum of 61 cents. At press time, the shelled price was 56 cents per pound, which equals a four-cent increase or a price of $454 per ton. Under this contract, the maximum was 61 cents per pound or $521.50 per ton.

Another offer was $400 per-ton minimum base allowing the farmer to sell based on the sheller’s web price, but within a certain timeframe and a maximum of $500 per ton.

Farmers need to plant a lot of peanuts this season with some cautions. Maximize program payments while retaining crop rotation, which  means higher yields and better quality. Financial institutions also want to know the Price Loss Coverage (PLC) payment in October. This year’s payment is based on last year’s prices, which were low. The first 4 months averaged about $380 per ton, but will increase. If the average was $400 per ton, that means a PLC payment of $135 per ton, applied to only 85 percent less budget reconciliation or about $100 per ton. In October 2018, the higher prices from 2017 crop will be known and payments will likely be reduced.

The Federal State Inspection Service’s graded report shows 2,757,728 tons of peanuts inspected as of Jan. 5, 2017. Most analysts are now predicting a 2,800,000-ton crop. The last 20 percent harvested has quality problems because of drought.
Ending stocks are still estimated by USDA at 1,004,500 tons. In the next report, ending stocks should drop along with exports. As prices continue to increase due to the shortfall, export buyers will likely look for other sources, if available. India has increased area planted by 21 percent and China and Argentina have increases in peanut areas planted.

Domestic peanut markets remain strong with stocks and processing numbers showing usage up 3.3 percent after four months. USDA has estimated a 1.9 percent increase. By category, peanut butter usage is up 5.8 percent, peanut candy up 8.3 percent and peanut snacks down 4 percent. In-shells are down 14.5 percent for the four-month period.

Peanut exports were up 58.7 percent (Jan-Oct) with China and Vietnam buying 41 percent of the U.S. exports. Canada continues a strong 17.6 percent and Mexico at 15 percent. By July, USDA estimates exports will be down 2.8 percent. The market will develop over the volume China buys and the determination of what price is too high.

While more peanuts are needed, production plans also need to include crop rotation and irrigation, if possible. Maximize program payments and, above all, profitability. We have industry challenges that include a modern, high-tech grading system, more volume-oriented buying points, more advertising and promotions, and hopefully a favorable atmosphere in Washington, D.C. Get ready!