Too Many Unknowns For Market Movement

It is not fake news to say that peanut markets are dead. As one broker explained, “As an industry, we must find a way to sell more peanuts.”

Domestically, we’re not going to turn this ship around anytime soon. As for exports, we could eventually export the 2017 forfeitures to China and maybe some peanuts from the 2018 crop, particularly those with quality problems, but that remains a hope and a dream.

Some of the reasons the market is so quiet is because of the many unknowns. At this time we have sellers for 2018 crop with too few buyers. There are buyers for 2019 crop and no sellers: Farmers won’t contract 2019 crop at $400 per ton and may plant without a contract.

There is plenty more: Will Trump get a trade deal with China in time to influence crop prices and change the farmer’s acreage decisions? Will Argentina harvest their good crop without complications?

How bad has the weather affected the peanut crop in Brazil? Decisions regarding the sales of loan-forfeited peanuts remain unknown. The 2018 Southeast peanut crop has some aflatoxin issues, and the extent of the damage will not be known for several months. Some sellers report a premium may be paid for the top quality product.

Just too many peanuts worldwide is a common comment when farmers talk about contracting peanuts. Most shellers continue to have available the $400-per ton contracts for 2018 runner type peanuts and 2019 crop with limited tonnage. 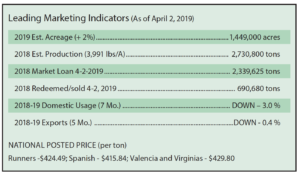 Peanut growers intend to plant 1.45 million acres in 2019, up 2 percent from 2018. The states expecting an increase in planted area are Alabama, Florida, Georgia, Oklahoma and Texas.

In Georgia, the largest peanut-producing state, planted area is expected up 1 percent from 2018. The increases are minor with Georgia up only 1 percent and Alabama up 3 percent. The surprise was the 25 percent drop in peanut acreage in South Carolina to 65,000 acres.

Reducing acreage or holding steady is needed to get supply and demand back in balance.

USDA is trying to help the industry reduce supplies by buying more peanuts. The 121,000 tons of 2017 forfeits are now being exchanged for commercial peanut butter. The jury is still out on whether this idea will work. Because of the delay in finishing the Farm Bill, and then the work stoppage during the government shutdown, peanuts remained in the warehouse longer than needed.

The trade mitigation allowed the Foreign Ag Service to buy 5.3 million pounds of peanut butter for the domestic markets with an investment of $5,301,000.

Supply and Disappearance numbers had minor changes last month. The ending stocks remained at 1,191,000 tons. USDA showed a slight decrease in domestic food and a slight increase in exports.

USDA predicts a domestic food use increase of 1.3 percent, half of the previous prediction. However, through January 2019, peanut usage is down 3.1 percent. Peanut exports are predicted to decrease only 1.8 percent. More accurately, August through December shows a decrease of only 0.4 percent.

U.S. peanut exports, overall, are holding the same volume as last year, down only 0.4 percent. However, the mixture of categories shows in-shells dropping 36.8 percent with peanut butter up 1 percent and raw-shelled peanuts up 5 percent. The new category of shelled-oil stock is up 87.7 percent as Mexico buys over 16,000 MT.

Last year, China was a major player importing 21,177 MT during the five-month period, but this year they have only purchased 2,090 MT from this category. On raw-shelled, China bought 2,409 MT and this year only 710 MT.

In Argentina, as the peanut plants are nearing maturity, unusually cold weather has set in. The colder soils and conditions cause the pods to slow down the maturity. Officials still estimate 1.1 million tons of in-shell peanuts, but late maturity could impact quality.

The Chinese peanut market has exports of only 4 to 5 percent, with oil crushing leading their domestic demand. World estimate is that China will have 4.56 million hectares making 3.73 MT peanuts per hectare or a total of 39.39 million MT, down only 5.6 percent from last year and not likely to buy from United States.

Farmers will have to be conservative this year, but optimistic — kind of like every year at planting time. Unknowns, although frustrating, can turn out favorable to the peanut farmer in the end.

It would help if Congress would approve the disaster aid package for those affected by hurricanes in 2018. That would certainly be a positive. If movement from China caused cotton prices to increase before planting time, that would be a positive.

Let’s sell all the forfeitures and eliminate that overhanging cloud, plus reduce acreage at least 10 percent to hopefully balance supply and demand.

Eating and selling more peanuts will help. It’s true that these peanut market unknowns are like a lottery scratch-off ticket — not every one is a winner. But, every now and then, you can turn up something positive.