2021 was a good year for peanuts. Crop quality was excellent compared to the past couple years with more Seg. 2s and Seg. 3s. Farmer-stock prices were higher this year with some incentives, and shelled prices were higher and held their ground. Demand for peanuts and peanut butter has dropped slightly since the pandemic began. However, consumers continue to favor the flavor, nutrition and availability of peanut products, which can still be found on most grocery store shelves. 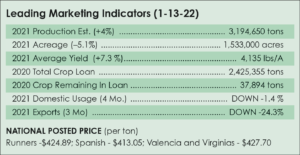 Although the growing and harvest seasons were considered smooth, there were problems to be addressed. Georgia and Texas experienced isolated flooding where peanuts were lost. Federal-State Inspection Services in each state had to cope with the pandemic protocols while keeping farmers’ peanuts moving through buying points. Dependable, available labor is a problem from the farm to the truck drivers hauling farmer stock to the buying points. However, strategic management in all segments made 2021 successful.

The agriculture economy will again influence peanuts in 2022. Fertilizer costs have tripled, but peanuts are not a major user, except for calcium. This could mean more acres planted in peanuts rather than corn and cotton.

Farmers, like everyone, are being hammered with higher fuel prices. Used and new equipment is higher, and good luck trying to get something prior to planting. Peanut seed is likely to cost more. Farmer stock prices for seed were mostly $525 per ton. After shelling and treating, look for seed to be at least 10 cents per pound higher than last year, depending on the sheller. The best advice is to order seed early. If there is a rush for peanut acreage, seed may be short this year.

Contract prices for 2022 are still unknown, and there are issues beyond production costs. On exports, demand from China has slowed. Imports during 2020 because of that crop’s quality problems, along with ample supply in other years has made the market more vulnerable. Argentina is the leading exporter to the European Union but is experiencing difficulty getting shipments into the continent because logistical hurdles continue to delay shipments and increase costs.

Keep an eye on exports, which will likely drive markets over the next few months.

Farmers should also pay close attention to drought concerns in parts of Brazil, Argentina and the United States. One exporter reported that there is a lack of interest from U.S. sellers to engage with buyers in light of stringent testing and continued logistical issues involved with shipping into the EU. Importers have expressed frustrations over a lack of space on vessels and delays at almost every point of the shipping process. U.S. exports are expected to decrease by 5% to 675,000 tons.

The U.S. Department of Agriculture’s stocks and processing report shows peanut usage down 1.4% in the first four months of the marketing year for raw peanuts in products, with peanut butter showing a decline of 3.3%.

For the month, peanuts in candy increased an amazing 22%, snacks were down 1.2%, peanut butter and in-shells were about the same as last year.

For nutritional programs, the government purchased 4.47 million pounds of peanut butter and 77.8 thousand pounds of roasted peanuts during November, the largest buy of the year. A number that could impact markets as well is that peanut stocks in commercial storage total 5.54 billion pounds equivalent farmer stock, up 23% compared to 4.50 billion pounds last year. 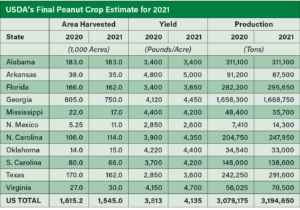 For The Coming Season

When it comes to marketing, if you can pencil in a profit, you need to consider it. There are lots of unknowns in the peanut market this early in the season. While farmers make plans on what to plant, the Farm Bill is hanging in the balance. It will again take a coalition of commodities and their leaders in the House and Senate to draft a Farm Bill and get it approved for the President to sign. Lots of talk about climate change programs, helping farmers through conservation and equality between any payments. Remember the 2014 Farm Bill was defeated on the floor of the House before eventually passing.

My advice is to continue your crop rotation; you want to make the best yields now and in the future. Order your peanut seed. Meet with buying points and shellers to negotiate a profitable contract. Avoid expensive inputs if possible, but supply what the crop needs to avoid bigger problems later in the season. Support political action committees who are meeting with Farm Bill leaders. Pray for rain and an end to the pandemic. PG