With a year of experience, will you make any adjustments? 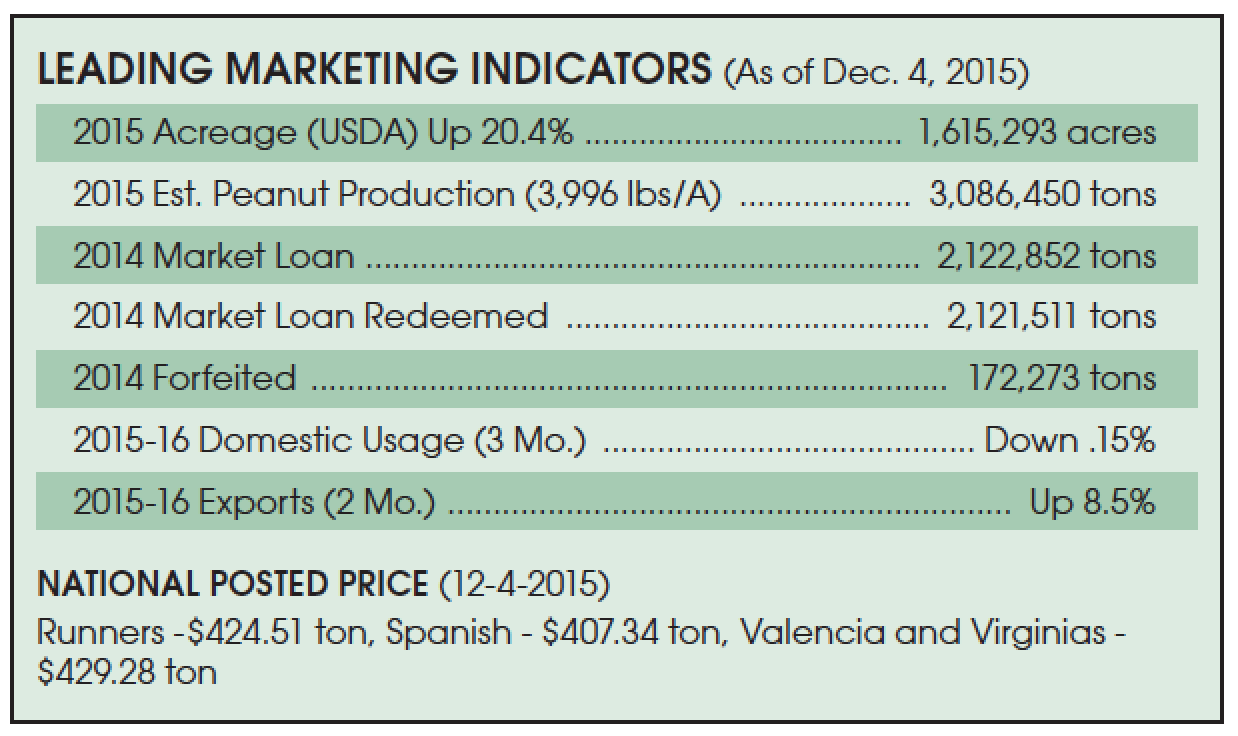 [dropcap]P[/dropcap]roducers have a better understanding of the 2014 Farm Bill after a full-year cycle under the Price Loss Coverage (PLC) program, which 99.7 percent of peanut producers chose. Farmers have always evaluated prices of commodities to determine the most profitable crop to plant. Other factors to evaluate include contract offers from shellers, cost of production and always with a watchful eye on the government’s handling of the peanut program.

Low corn and cotton prices shifted many acres to peanuts in 2015, up 20.4 percent. Cotton opted to not have a farm program and that exacerbated the problem for peanuts as cotton base became “generic base” and could be shifted to other commodities, but must be planted. The new peanut program eliminated direct payments and established a safety net for producers. It is designed to work when prices are low for farmers to survive. Farmers say it is working; critics claim it is costing the government too much money.

Another factor influencing the peanut world is lenders. Lenders are pushing growers to plant peanuts because they know peanuts have a program with some protection and cotton does not. Lenders note that without the PLC payment on base acres in 2015, based on the $440 per-ton average price on 2014 peanuts, many farmers could not pay crop debt.

Farmers also learned this year that USDA can reduce the National Posted Price to move peanuts out of the loan, and the producer will be charged for market gain against the farmer’s payment limit. The Market Loan Gain is charged against farmers with peanuts in the loan, many not knowing they have peanuts remaining in the loan. Farmers learned they must work with the buying point, DMA or CMA so peanuts can be redeemed to avoid maxing out the payment limit. Looking for the best option, peanut farmers decided to increase acreage, up 20.4 percent to 1,615,000 acres. The leading production state, Georgia, increased acreage 31.6 percent; Texas was up 29.3 percent and newer producers in the states of Arkansas and Mississippi switched from generic cotton base to peanuts.

2015 was an unusual growing season for U.S. peanuts, and it appears bad harvest weather wiped out about 10 percent of the crop, especially in water-logged South Carolina. A higher yield for top-producing Georgia offsets reductions elsewhere in the Southeast. In the Southern Plains, non-irrigated crops were stressed by an extended period of low rainfall and extreme heat in August.

Rains during the growing season in the Southeast and higher-yielding varieties caused experts to predict a 3,160,000-ton peanut crop, averaging 3,922 pounds per acre. The 2014 peanut crop already had an excess carry-forward of one million tons and, even with usage up by 13 percent, the 2015 carry-forward is estimated at 1.4 million tons.

While farmers were busy growing the 2015 peanut crop, USDA was doing everything possible to rid themselves of potential forfeitures, reducing the price $100 per ton below loan. Buyers could lock in a price for 60 days and over 165,000 tons were redeemed. Unfortunately, another 172,000 tons were forfeited and offered for bids. Runner prices have averaged about $280 per ton and Virginias about $380 per ton. At press time, CCC still has 20,842 tons of 2014 peanuts for sale.

USDA declared the national average price of peanuts for the marketing year 2014 as $440 per ton. The Farm Bill provides that the reference price for peanuts is $535 per ton. To obtain the PLC payment amount, deduct the average price from the reference price and that is the peanut PLC payment of $95 per ton. Congress passed the Budget Control Act of 2011 and the reconciliation reduction (sequestration) is now 6.8 percent. Deduct 6.8 percent from the $95 per ton and you get $88.54 per base ton. Payment acres are 85 percent of the farm’s base acres. Payments are limited to $125,000 per eligible producer. Payment limitation includes benefits received from peanut market loan gains, loan deficiency payments and ARC/PLC payments for peanuts. Payments should have been received in mid-December.

Estimates on the peanut program outlays vary. USDA estimated (FY2016) it at $379 million. Food and Ag Policy Research Institute (Aug 2015) projects $432 million for peanuts. The Congressional Budget Office projects $232 million. It is still too early to tell, but the market value of peanut production ranges from $1.1 billion to $1.4 billion.

Growth in peanut demand is having difficulty keeping pace with the supply increase. In October, peanut butter usage dropped 13.7 percent, causing the annual drop to be down 7.2 percent. Exports are holding strong, up 8.5 percent through September.

Limits on domestic shelling capacity and storage will make it even more crucial to broaden export markets this year. U.S. peanut exports in 2015/16 are seen exceeding last year’s total by more than 100 million pounds and nearly matching the 2012/13 record at 1.19 billion pounds.

USDA predicts a robust 13-percent increase for domestic use of peanuts. Despite higher demand, season-ending peanut stocks for 2015/16 may climb to 2.84 billion pounds and eclipse the previous 2012/13 record of 2.77 billion pounds, but that will all depend on the final harvest numbers.

One economist is encouraging farmers to add an entity, if possible, to help with payment limitations, and to limit the amount a farmer contracts, if power of attorney is included, modify contracts to aid the farmer to control redemption of the peanuts or share in the Market Loan Gains.

Another leader strongly urges farmers to remember the benefits of rotation and consider available warehouse space when planning their 2016 crop because warehouses are full and it is impossible to qualify for a marketing loan without a warehouse receipt.