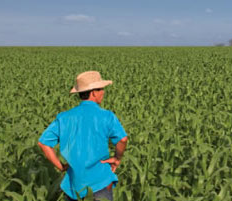 New Crossover Insecticide/Fungicide
Innvictis Crop Care, LLC, announces the launch of Crossover, an insecticide plus fungicide premix formulated into a convenient and stable emulsifiable concentrate. It is labeled for corn, cotton and soybeans, plus cucurbits. Crossover combines a triazole fungicide with a pyrethroid insecticide. Priced affordably, it can serve as an all-in-one in early season wheat markets where many fields often have a combination of rust and insects. Crossover can also be used in soybeans as an early season foliar “recharge” or in the R5 and R7 windows when pests and disease attack the crop. It can be mixed with strobilurin fungicides to round out disease control in both corn and soybean applications. With a unique pest spectrum that includes diseases like rust, leaf blight and powdery mildew as well as insects such as cutworm, armyworm, earworm, grasshoppers, stinkbugs, thrips and aphids, Crossover has been approved by the U.S. EPA and will be available for sale in the 2014 growing season. For more information about Innvictis Crop Care, visit www.innvictis.com.

Precision Potassium Fertilizer
Agro-Culture Liquid Fertilizers has announced the release of Kalibrate, a soil-applied potassium fertilizer that contains six percent sulfur. With exceptional compatibility and efficacy, Kalibrate provides growers timely application options that can address most nutrient needs. Kalibrate supplies usable potassium and sulfur when applied in strip-till, planting-time and side-dress applications. It is also effective when broadcast or injected through fertigation, making it an excellent potassium source for soil-based cropping systems. Superior performance and application flexibility are achieved through nutrient synergy and proprietary AgroLiquid chelating technology. In many soil environments, Kalibrate will eliminate the need for additional potassium. Kalibrate’s lower freezing point and ability to come back into solution even after freezing makes it well-suited for fall and early season delivery. For more information on this, visit www.agroliquid.com and look under the “products” heading.

Syngenta Names Herbicide Premix
Syngenta has announced the name of their new corn herbicide premix. Currently SYN-A197, the product will be marketed as Acuron herbicide upon EPA registration, which is expected in 2015. Syngenta developed Acuron in response to the problem of weed resistance and the demand for residual herbicides with multiple modes of action. The new herbicide premix combines three modes of action and four active ingredients, including new bicyclopyrone, to deliver a multi-targeted approach to weed control. Syngenta anticipates Acuron will control more than 70 broadleaf weeds and annual grasses, including marestail and Palmer amaranth. The formulation will contain a safener, benoxacor, and its application timing is expected to be from 28 days pre-plant up to 12-inch corn. For more information about SYNA197, visit www.farmassist.com. Follow Syngenta on Twitter (@SyngentaUS) and Facebook (Facebook.com/FarmAssist).