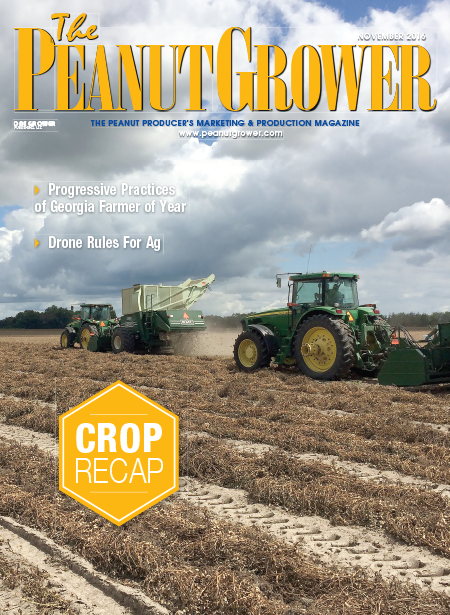 New Members On Standards Board

Agriculture Secretary Tom Vilsack has appointed three peanut producers and three industry representatives to serve on the Peanut Standards Board. All will serve three-year terms of office ending June 30, 2019.

The Peanut Standards Board is comprised of 18 members, with one-third appointed each year.

The Peanut Standards Board is authorized under the Farm Security and Rural Investment Act of 2002. USDA consults with the board to establish or change quality and handling standards for domestically produced and imported peanuts.

For more information about the board and USDA’s partnership with the peanut industry, visit www.ams.usda.gov/rules-regulations/peanut-standards-board.

The 2016 peanut crop in Argentina ended with no good news, officials said, as excessive rains and adverse weather generated an estimated loss of at least 47,000 hectares plus deterioration of peanut quality, which is reportedly worse than expected.

Despite all the problems, producers and peanut companies, especially in Cordoba are planning to continue growing and plan to focus on the foreign market, especially the European Union. Javier Martinetto of AGD told the attendees at the China International Peanut Congress that Argentina has the possibility of providing more High Oleic peanuts.

With the U.S. sold out of the 2015 crop and reluctant to price 2016 until more of the crop is harvested, buyers will be concentrating on the upcoming new crops like India and China, plus the U.S. Argentina is having trouble delivering EU quality required peanuts as some are being re-milled and that causes delays. Argentina is getting ready to start new plantings and one official said that land rent per hectare has almost doubled, from $525 to $900 per hectare, increasing the cost of delivering farmer stock to the warehouses. Officials are expecting more acres, but planting peanuts depends on prices of corn and soybeans.

Golden Peanut and Tree Nuts, a subsidiary of Archer Daniels Midland Company, reopened its Vienna, Ga., warehouse after installing upgrades that will improve unloading speed and product quality in time to receive its first truckload of farmer stock to the upgraded facility.

“We’re pleased to have completed phase one of our Vienna improvements on time and on budget and to see farmers already arriving to unload their crops,” said Greg Mills, president of Golden Peanut and Tree Nuts. “The upgrades we have made—and will continue to make—at Vienna will make for a more efficient unloading process for farmers, and improve the quality of the stock that goes from Vienna to our processing facilities. We’re looking forward to a great harvest season.”

Upgrades to the facility included replacement of receiving equipment, improved ventilation and aeration and new sand screens and extra conveyors.

“This comes on the heels of our announcement a few weeks ago that we have completed the expansion of our Dawson, Ga., processing facility,” Mills added. “At Golden, we know that just being one of the nation’s biggest handlers and processors of peanuts isn’t enough. We’re enhancing our operations and growing our business. With each new project, we help to ensure that Golden is the peanut and peanut product company of choice for farmers and customers alike.”

Golden Peanut and Tree Nuts also announced the opening of a new office in Albany, which will improve the company’s regional operations by bringing together Golden Peanut and Tree Nuts leaders from around the Southeast.
“This new regional office will bring together key leaders, putting them under the same roof for better and faster communications and decision-making, which will benefit our customers and our company alike,” Mills said. “Few other companies can offer the capacity, scope, expertise and customer service of Golden Peanut and Tree Nuts, and we’re continuing to grow and improve to make sure that we remain the go-to company for peanut and tree nut customers across the United States and around the globe.”

Georgia Peanut Commission and the Georgia Bankers Association will join forces Oct. 17-21, 2016 for the 40th annual Georgia Peanut Bank Week. Local banks and financial institutions will honor Georgia’s peanut farmers and their contribution made to the state and local economies.

This year’s theme, “In Georgia, Money Grows on Vines – Peanut Vines,” will showcase the importance of peanuts, Georgia’s official state crop, and how Georgia’s peanut farmers contribute approximately $1.3 billion annually to the state and local economy to help maintain Georgia’s largest industry: agriculture. “This is the fortieth year we have held a special salute to farmers in cooperation with financial institutions,” GPC Chairman Armond Morris said. “We have a great nutritional message to share with consumers and we hope by incorporating peanuts into their diet, they will feel the power peanuts have to offer.” Other businesses are urged to join in the celebration. Peanuts, recipe cards and other promotional material available at www.gapeanuts.com

National Peanut Board’s President and CEO Bob Parker and Virginia Board Member John Crumpler attended the China Peanut Conference Sept. 7- 9 in the Shandong province, one of the major peanut-producing provinces in China. Parker presented updates on U.S. peanut production and trade to the gathering of importers, exporters and retailers of peanut products in China.

“Our purpose for attending was  to get a better view of the ongoing changes and trends in the global peanut market, while strengthening our relationships with the peanut industry in China,” said Parker.

Prior to the conference, Parker and Crumpler met with the director of the Agricultural Trade Office and Golin in Shanghai. They traveled to peanut growing regions and observed the harvesting process; usually completed by removing peanuts from the plants by hand.

The Food and Drug Administration is now allowing peanuts to be called “healthy.” FDA announced on Wednesday that they are beginning the public process to redefine the “healthy” nutrient content claim for food labeling. In the interim, FDA has issued guidelines that allow the industry to refer to peanuts as healthy, due to their high levels of unsaturated fat and overall beneficial nutrient profile. Peanuts contain 12 grams of unsaturated fat and two grams of saturated fat per one ounce serving.

“It’s exciting to be able to clearly tell the public that peanuts are indeed a healthy food that they should enjoy as part of their healthy lifestyle,” said National Peanut Board registered dietitian Sherry Coleman Collins.

“In the 1980s, we were convinced that only low-fat choices were healthy choices. Now we know that food and nutrition are more complex than that, and our marketing efforts can also align with what consumers need to hear to make better choices. Peanuts are the total package of protein, good fats, and more than two dozen vitamins and phytonutrients, making them indeed healthy,” said Collins.

The comment period for the Request for Information and Comments for the use of the term “healthy” in the labeling of human food products is open until Jan. 26, 2017.

At the Plains Peanut Festival recently, former U.S. President Jimmy Carter told the crowd “if you want to prevent cancer and diabetes, eat a handful of peanuts or peanut butter every day.” He and First Lady Rosalyn Carter waved from the balcony at the Plains Peanut Festival. Carter said he had been in the peanut business for 82 years and recalled boiling peanuts and walking from Archer to Plains to sell the bagged boiled peanuts for five cents a bag.

President Carter also talked about the Carter Center and efforts to eradicate diseases where the U.S. is not working and working around the world for fair and democratic elections. As usual, President Carter, who is 92 now, also taught Sunday School the weekend of the Festival

You know it as well as we do…Peanuts are not only delicious, but full of healthy fats, fiber, plant-based protein and loads of vitamins and minerals. We want to get this message out to the world; a world now communicating by emoji. That’s why Golden Peanut & Tree Nuts has launched the Where’s My Peanut Emoji? campaign to get a peanut added to Apple’s emoji keyboard.

We need your help to spread the word! Go to WheresMyPeanutEmoji.com and sign the petition. Share the campaign with your Twitter followers, Facebook friends and colleagues. Don’t forget to use the hashtag #wheresmypeanutemoji to show your support! Then, sit back and think of all the great emoji combos you’ll have to work with when we succeed.

For Arkansas, Gregory Gill of Walnut Ridge is the reappointed board member. Gill operates Greg Gill Farms and has been engaged in peanut production most recently for six years. Gill previously grew peanuts with his father from 1968-1979.

Gregory Baltz of Pocahontas is the reappointed alternate member. Baltz operates Running Lake Farms and has been growing peanuts for six years. He farms runner peanuts, rice, corn and soybeans. “There’s been great work done by predecessors to establish peanuts in Arkansas,” said Baltz. “I’m honored that Arkansas has been accepted as a major peanut-producing state and hope we can be a model for the industry.”

For New Mexico, Jim Chandler of Portales is the newly appointed board member. Chandler has been farming for more than 50 years and grows corn, cotton, hay, wheatlage, grain sorghum and peanuts and pastures cattle.

Chandler believes the National Peanut Board is important because farmers need advocates to correct misperceptions about conventional agriculture that have become barriers to consumption. “NPB does a good job in that advocacy arena and helps in the development of new and improved foods and varieties involving peanuts.”

Karen Jackson of Seminole, Texas, is the newly appointed New Mexico alternate member. Jackson is a co-partner of Gary and Karen Jackson Farms based in Lea County, New Mexico. Their acreage is located in eastern New Mexico and in several counties in west Texas. They grow peanuts, cotton, peppers, watermelons and rosemary.

“I look forward to serving on the National Peanut Board and learning from the new experiences,” said Jackson, who has been growing peanuts for 20 years.

For Oklahoma, Les Crall of Weatherford is the newly appointed board member. Crall has been in peanut farming for 20 years and previously served as the National Peanut Board alternate. He currently serves as chairman of the Oklahoma Peanut Commission and a former member of the Peanut Standards Board.

Gayle White of Frederick is the newly appointed alternate member. White is the owner/operator of White Farm and Ranch with her husband, Joe D., and has been engaged in peanut production for more than 25 years.

The NPB, through research and marketing, is finding new ways to enhance production and increase consumer demand by promoting the great taste, nutrition and culinary versatility of USA-grown peanuts.