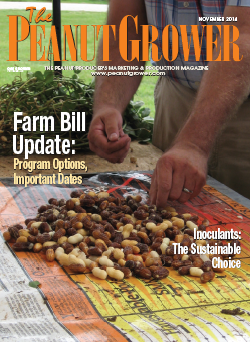 No Payment On 2013
Crop USDA has announced that no counter-cyclical payment will be made on 2013 crop peanuts. The National Ag Statistics Service publishes the peanut market year average price received by farmers by state and nationwide. The published prices will trigger payments on a farm base if prices are below the target price. For peanuts, the old Farm Bill target price was $495, and if the U.S. average price was below the target price, a countercyclical payment would be made. In the new Farm Bill, payments are issued when the effective price of a covered commodity is less than the respective reference price for that commodity established in the statute for 2014-2018 crops. The effective price equals the higher of the market year average price or the national average loan rate. The PLC payment is equal to 85 percent of the base acres of the covered commodity times the difference between the reference price, which is $535 per ton in the new Farm Bill, and the effective price times the PLC payment yield for the covered commodity. The marketing year ended for peanuts July 31, and USDA issued the 2013 average price for peanuts at $498 per ton, which is above the $495 per ton target price; therefore, no counter-cyclical payment will be issued for 2013.

Industry Loses Great Ambassador
The National Peanut Board was saddened to report that Don Self, 55, NPB delegate from Mississippi, lost his life in a farm accident. Don was integral in establishing Mississippi as a major peanut-producing state on the National Peanut Board in 2008 and had served on the board since that time. He proudly served as the chair of the Domestic Promotions Committee and traveled for the board from New York to California promoting peanuts. He was a member of the Mississippi Peanut Growers Association and the Monroe County School Board. He also served as a deacon at New Prospect Baptist Church, where he was the AWANA Commander, church musician (guitar) and soloist. The Mississippi Peanut Growers Association announced the establishment of the Don Self Memorial Scholarship. The scholarship will be managed by the Mississippi State University Foundation and contributions are tax deductible. The goal is to raise $25,000 to make this an endowed scholarship and to generate at least an annual $1,000 scholarship in perpetuity. Contributors may make a one-time donation or make an annual pledge for up to five years. Anyone wishing to donate should make the check to “MSU Foundation, Inc.,” and note that it is in memory of Don Self. The mailing address is MSU Foundation, Inc., P.O. Box 9760, Bost Building, Rm 204A, Mississippi State, MS 39762. Don is survived by his parents, his wife Lisa, son Nathan, daughter-in-law Tara, daughter Alexis, son-in-law Hank and four grandchildren.

Georgia FSIS Opens New Office
Georgia Federal-State Shipping Point Inspection Service (GA FSIS), now located in the Pecan Grove Industrial Park in Albany, celebrated the new building with an open house and ribbon cutting. GA FSIS president and chief financial officer, T.E. Moye said, “The City of Albany has the infrastructure to enable us to serve not only Georgia but the entire Southeast. The new facility will allow for continued growth the organization has seen over the last several years. The building was designed with advanced technology and a bigger training facility.” Since 1927, the Federal State Inspection Service has provided an honest, impartial, efficient and accurate third party service to the members of the agricultural community. GA FSIS inspects more than 35 commodities, including peanuts, many different fruits and vegetables and pecans. FSIS ensures the shipment of high-quality produce and enhances Georgia’s reputation as a supplier of superior agricultural products. GA FSIS currently staffs 120 employees and will hire approximately 800 more for the upcoming peanut farmerstock season. Moye said, “We see it as our responsibility to ensure that the farmers’ crop is graded with integrity, which allows the shelling plant the ability to segregate by quality and condition.” GA FSIS also sells equipment necessary for peanut inspection. Their maintenance department services the equipment, guaranteeing that it is within the USDA regulations required for peanut inspection. For information, call 229-432-6201 or visit their website at www.gafsis.com.

NPBPA Announces Annual Convention
Rodney Locke, of Locke Farm Center in Dawson, Ga., recently announced the 2015 National Peanut Buying Points Association Annual Convention will be Jan. 8-11, 2015, at Charleston Place Hotel, Charleston, S.C. Anyone interested in the peanut industry is invited to attend. This year’s conference is about a month earlier and will begin on Thursday, instead of Friday, with a travel day home on Sunday. The theme of this year’s meeting is “Peanut Power and Managing Risks!” The 2014 Farm Bill unveiled more tools for managing risk in peanuts, plus a higher reference price that could influence peanut markets. World supply and demand is likely to have more of an impact on peanut acreage in the future. The program will include updates on the power of the peanut on the farm, at the buying point, at the shelling plant and an update on the nutritious products made from peanuts. Packets will be mailed to all NPBPA members, but if you would like to receive a packet, contact Angela at spearmanagency@friendlycity.net.

Guilty Verdict In Salmonella Case
A federal jury convicted Stewart Parnell, owner of Peanut Corporation of America, for numerous counts, including conspiracy, wire fraud and obstruction of justice related to shipping tainted peanut butter to customers and faking results of the lab tests. Parnell’s brother, Michael Parnell, was also found guilty of multiple charges including fraud from lab results, but was acquitted of shipping the product. Mary Wilkerson, quality assurance manager, was found guilty of obstruction of justice for hiding information about the salmonella problems from investigators. Sentencing will come later in the case and the judge chose to allow the three to remain free on bond. Parnell’s attorney told an Associated Press reporter, “We respect the jury’s work and the jury system, but we believe this was the wrong result. We’ll continue to fight for Stewart at sentencing and in an appeal.” The trial lasted seven weeks in Albany, Ga., and is said to be the first time corporate executives and plant workers were tried in a food-safety related case.