A look at the USWA annual report from 2020 shows 33 licenses, 333 functional units and 4.7 million tons of capacity.

Compared to 2019, this represents a 10% increase in licenses, less than 1% decrease in functional units and a 13% increase in capacity. New entries in the warehousing sector signal positive growth in the industry. Overall, the number of peanut licenses has remained steady.

Program enrollment for 2021 is required in order to participate in the programs, but elections for the 2021 crop year are optional and otherwise remain the same as elections made for 2020.

ARC and PLC provide farmers with income support as a result from a substantial drop in crop prices or revenues and are vital economic safety nets for most American farms.

FSA recently updated the annual and benchmark yields for ARC/PLC program years 2019, 2020 and 2021. This data may be helpful in choosing a program.

More information and the web-based decision tool can be found at farmers.gov/arc-plc.

Vilsack To Return As Ag Secretary

U.S. Secretary of Agriculture nominee Tom Vilsack recently made comments about serving another term as ag secretary.
“We have the world’s most productive and innovative farmers. But the farm economy is suffering due to the pandemic, years of consolidation and natural disasters brought on by climate change.

“We must stop the farm debt cycle and create transparency in pricing throughout the supply chain; expand overseas markets and give U.S. agriculture a level playing field; and harness USDA’s expertise in science and conservation to work with farmers, ranchers and forest owners to create new sources of income tied to their good climate practices,” Vilsack says.

For 2020, more than 1.5 million acres of peanuts were insured, the second-highest insured acreage since 2017. This corresponds to $854 million in total liability, which is third highest behind 2012 and 2017. As of mid-February, with a few claims left to be settled, the overall loss ratio on the 2020 insured acres is 1.13. This means that $1.13 dollars of indemnity were paid out for every dollar of total premium paid by the insured and the USDA.

The long-term average loss ratio should represent a dollar in indemnity for every dollar in premium. The states suffering the highest relative losses were Texas and New Mexico, together making up 40% of all insurance payments.

Insured acres totaled 1.5 million, with insured liability at $854 million. Total premiums paid from growers and government were $72 million, and the total indemnity was $81million.

Federal crop insurance policies provide coverage for loss of production/yield or a loss in value due to a change in market price during the insurance period in addition to the perils covered by the standard loss of yield coverage.

Studies consistently show a handful of issues keep some pediatricians from recommending early introduction of peanut foods to prevent allergies — despite growing evidence and endorsements.

That’s why the National Peanut Board has worked closely with the American Academy of Pediatrics to create programming that helps health care providers work through those challenges and champion early feeding with new parents.

In January, the Peanut Allergy Prevention Through Education video series launched on AAP’s PediaLink learning center. Supported by an NPB grant, the videos feature allergy experts addressing issues ranging from the number of peanut foods to give an infant to how to identify a potential reaction. Any health care provider can access the videos through PediaLink.

The National Peanut Buying Points Association has canceled the 2021 annual winter conference and rescheduled it for February 2022 at the Emeline Hotel in Charleston, South Carolina. The summer conference, jointly held with the American Peanut Shellers Association, is Aug. 10-11 at the Doublegate Country Club in Albany, Georgia.

“Every buying point should be a member,” says President Monty Rast of Carolina Peanut LLC in Cameron, South Carolina. “Membership is $600 per year and you will receive Tyron’s newsletter with all the marketing news, plus invitations to all meetings. Buying points have a seat at the table at the Federal State Inspection Service, the U.S. Peanut Federation and state organizations. Growers and companies can also join for $400 per year.”

The American Peanut Council has announced that the International Peanut Forum will be a virtual meeting April 28-30, 2021. The next in-person meeting is tentatively set for April 27-29, 2022, in Budapest, Hungary. For questions, email the IPF Secretary Louise Mckerchar at lmckerchar@peanutsusa.org.uk. 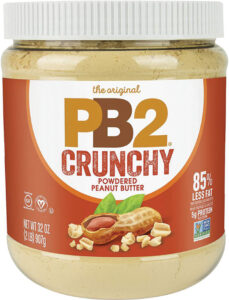 In yet another first for the peanut butter market, PB2 Foods, the pioneer of powdered peanut butter, has launched its newest innovation: PB2 Crunchy Powdered Peanut Butter.

“Finally, health-conscious peanut butter lovers who prefer crunchy over creamy no longer have to pick a side,” says Craig Entwistle, chief executive officer of PB2 Foods.

Like other offerings in the brand’s portfolio, PB2 Crunchy is made using high-quality peanuts sourced from Georgia. With 70% fewer calories and 85% less fat than traditional peanut butter, PB2 Crunchy delivers 5 grams of plant-based protein per serving. The product is also gluten-free and GMO-free, as well as certified vegan and kosher.

“No one in our category has tried anything like this to date,” says Entwistle. “And as the original powdered peanut butter brand, we pride ourselves on bringing consistent innovation to the market so more consumers can enjoy the better-for-you benefits of PB2.”

PB2 Crunchy is available online through the PB2 website, the brand’s Amazon store and is expected in retail locations in early 2021. For more information, visit pb2foods.com.

Richard Owen has been named the new president and chief executive officer of the American Peanut Council, effective Feb. 1.

Owen has held senior leadership positions at the Produce Marketing Association for the past 11 years. Earlier in his career, he served as director of agricultural affairs in the office of the U.S. Trade Representative and as executive vice president of the Montana Grain Growers Association.

With a degree in agricultural education from Virginia Tech University, Owen has a track record of working to strengthen American agriculture, with expertise in international marketing and market development.

“The APC spent several months collaborating with industry stakeholders to identify qualities needed in the next leader. In our selection of Richard Owen, we believe we have found the best person to lead the organization into the future,” says Monty Rast, APC chairman. “We are excited to work with Richard in laying out a comprehensive strategy to develop international markets, reduce tariff and non-tariff trade barriers, and expand sales of U.S.-origin peanuts around the world in a sustainable manner.”

Owen says, “To be able to lead an industrywide organization of APC’s stature into the next chapter of its growth is a great personal and professional opportunity. Throughout the selection process I was impressed with the leadership’s commitment to both the organization and the broader peanut industry. I look forward to partnering with all of the industry stakeholders in this new endeavor.”

Patrick Archer, the APC’s long-serving president, announced his retirement in mid-2020. Best wishes to Patrick in his future endeavors.