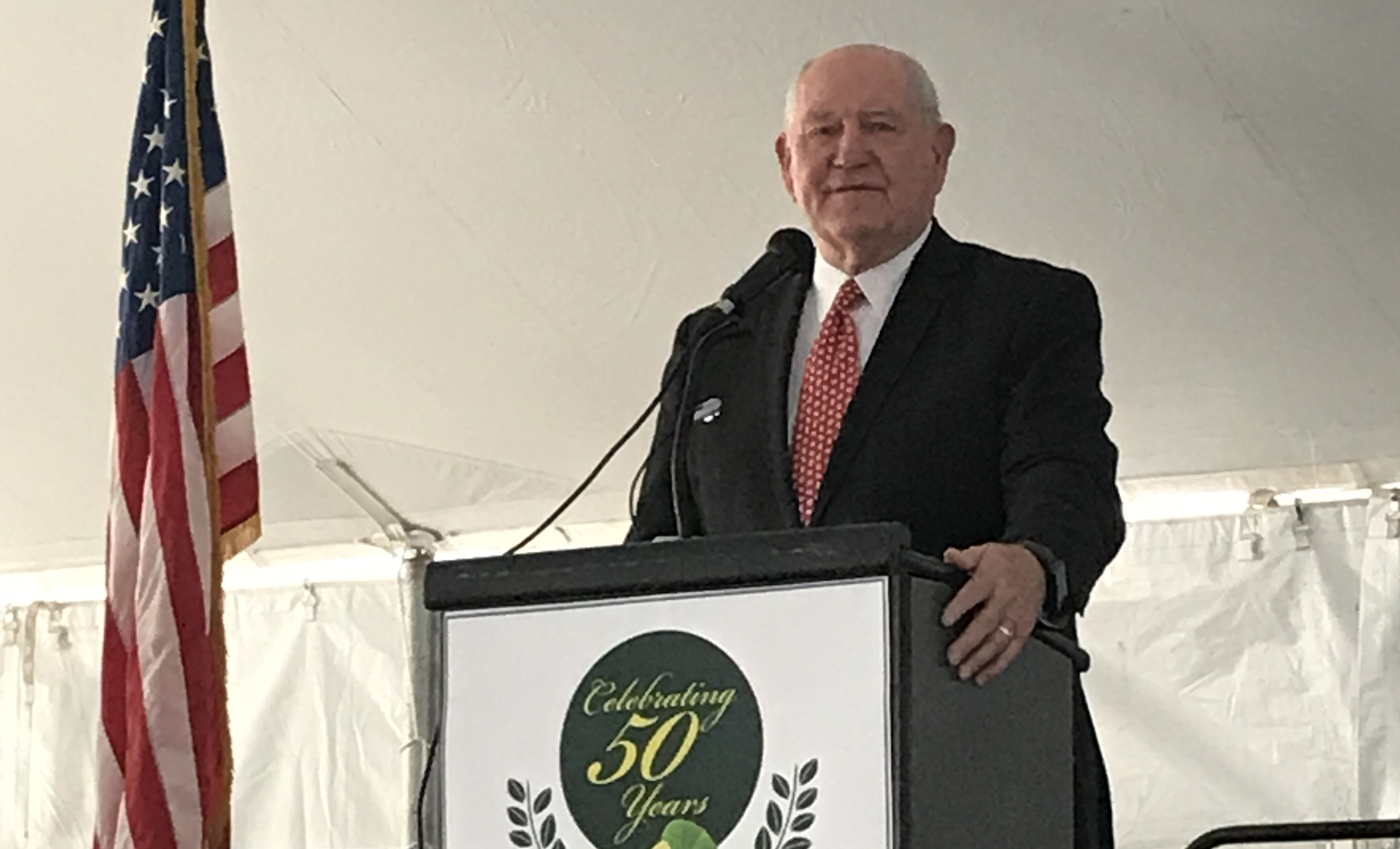 It was a star-studded event at the National Peanut Research Laboratory’s 50-year celebration.

Many former employees returned for the celebration including Jim Davidson, former head researcher. He recalled that many of the early projects focused on post-harvest issues.

Jacobs-Young emphasized that the lab is noted for delivering solutions and developing strong partnerships. The lab is responsible for developing the Irrigator Pro and Whole Farm – a planning system with rotation data to help growers make better decisions on what to plant in a field for maximum profit.

Secretary Perdue praised the peanut lab’s research efforts from the molecular to the whole farm.

“The National Peanut Research Lab is simply conducting the right research at the right time in the right place, and look what it has done to help farmers increase peanut production on the farm. The next 50 years will be just as exciting.”[divider]

U.S. Secretary of Agriculture Sonny Perdue said the U.S.-Mexico-Canada Agreement is a big win for American workers, farmers and ranchers following the announcement that an agreement had been reached by United States Trade Representative Robert Lighthizer and Speaker of the House Nancy Pelosi.

“The agreement improves virtually every component of the old NAFTA, and the agriculture industry stands to gain significantly,” Perdue said. “President Trump and Ambassador Lighthizer are laying the foundation for a stronger farm economy through USMCA and I thank them for all their hard work and perseverance to get the agreement across the finish line.”

All food and agricultural products that have zero tariffs under the North American Free Trade Agreement will remain at zero tariffs. The USMCA will create new market access opportunities for U.S. exports to Canada of dairy, poultry and eggs, and in exchange the United States will provide new access to Canada for some dairy, peanut and a limited amount of sugar and sugar-containing products.[divider]

U.S. Secretary of Agriculture Sonny Perdue recently announced that the U.S. Department of Agriculture would make $800 million available to producers in Alabama, Florida and Georgia affected by Hurricanes Michael and Florence. The state block grants are part of a broader $3 billion package to help producers recover from 2018 and 2019 natural disasters, which includes the Wildfire and Hurricane Indemnity Program-Plus as well as programs for loss of milk and other stored commodities.

“Natural disasters dealt producers some hefty blows in the past couple of years,” says Perdue. “This relief complements USDA’s tool chest of disaster assistance programs and crop insurance. In many cases, these programs help us reach producers who suffered substantial losses beyond what our regular programs cover. While we can’t make producers whole, we can give them a helping hand to get them back on their feet and prepare for next year’s planting and harvest.”

USDA, the governor’s offices and the state departments of agriculture are working out final details for the grants. The grants will be for losses not covered by other USDA disaster programs, including timber, cattle, poultry, horticulture crops and pecan production.[divider]

In Fiscal Year 2019, the National Peanut Board commissioned an economic study to measure the return of peanut producers’ investments in the marketing and research funding programs managed by the board.

The study, “An Economic Evaluation of the National Peanut Board,” conducted by Dr. Harry M. Kaiser of Cornell University, found that each dollar invested in the board’s checkoff program between 2014 and 2018 returned $9.74 to the peanut industry.

Peanut farmers, through the NPB, invest about $10 million annually to implement programs that strengthen peanuts’ position in the marketplace and maintain, develop, and expand markets for peanuts. Additionally, NPB helps fund production-level research aimed at decreasing production costs and improving the efficiency of peanut growers.

“This study demonstrates the tremendous impact of NPB on the domestic peanut market,” Kaiser said. Had there not been any NPB marketing activities over the most recent five-year period, 2014 through 2018, total domestic peanut demand would have averaged 14.4% less.”

Furthermore, the study emphasized had there not been any NPB-sponsored production research over this period, peanut yields would have averaged 3,462 pounds per acre, compared with 3,880 pounds, or 10.8% less.

“It is important for the peanut industry to have an independent evaluation of the effectiveness of the marketing and research programs farmers fund,” says Bob Parker, NPB’s president and CEO. “We’re confident of the methods of this economic analysis and we’re very pleased with the results. Moving forward, we will be able to use this data to plan and manage our future programs.”[divider]

Texas A&M AgriLife Foundation Seed, in partnership with Intellectual Property & Commercialization, brings newly developed seeds and plants to the marketplace for farmers and gardeners through license agreements. Fees and royalties collected from the licensees are reinvested throughout AgriLife Research, resulting in increased financial support for AgriLife breeders.

“Our goal is to raise the profile of Texas A&M AgriLife Foundation Seed in the seed industry on the state, national and international stages. The new name will also provide a clearer message about the positive impact Texas A&M AgriLife has on farms, ranches, businesses and on the consumer’s dinner plate.”

Examples of seeds produced and processed at Texas A&M AgriLife Foundation Seed are those used for forage grasses and crops such as wheat, peanuts and sorghum.

A new peanut sheller is in the works for 2020.[divider]

The article highlighted the benefits of American peanuts as compared to other origins and also mentioned the new U.S.-Japan trade agreement, which is expected to improve market access for the U.S. peanut industry. Daily circulation for The Nikkei exceeds 3 million copies in Japan, compared to 2.6 million for The Wall Street Journal in the United States.

The article was also widely seen by members of the Japanese peanut trade and has resulted in one new trade lead for U.S. peanut products. The APC also conducts promotional events to increase interest in U.S. peanuts.
Buying Points Meet In February

The 2020 conference theme is “Building Unity, Service and a Profitable Future,” with sessions on markets, the new grading system, U.S. Department of Agriculture assistance, exports and the next Farm Bill. All buying points, shellers and industry associates are invited to attend.

The program will kick off on Friday night with a welcome reception. Educational sessions will be held on Saturday and Sunday mornings. There will also be a prayer and awards breakfast on Sunday morning. The Great Cash Giveaway Reception and Auction will be held Sunday evening.

Registration is available online at www.peanutbuyingpoints.org. For more information or to obtain a registration form, email Angela Elder at spearmanagency@friendlycity.net.[divider]

A judge has recommended the Supreme Court side with Georgia in a decades-long dispute with Florida over water.
The court should reject Florida’s request to limit how Georgia uses water from shared rivers, U.S. Circuit Judge Paul Kelly Jr. wrote in a ruling issued in December.

Since the 1990s, Florida has said Georgia uses too much water from the Apalachicola-Chattahoochee-Flint River Basin, hurting residents of the Sunshine State. Florida officials also argue that decreased flows caused the collapse of the oyster industry in Apalachicola Bay, but Kelly says the state failed to prove the issue was Georgia’s fault.

“We are pleased with special master Kelly’s recommendation and especially his recognition of Georgia’s significant water conservation and efficiency efforts,” Katherine Zitsch, director of the Metropolitan North Georgia Water Planning District, said in a statement. “Since 2001, water withdrawals in metro Atlanta have dropped by more than 10%, even as our population has increased by 1.3 million.”

The dispute over water usage between the two states will likely continue for decades to come.