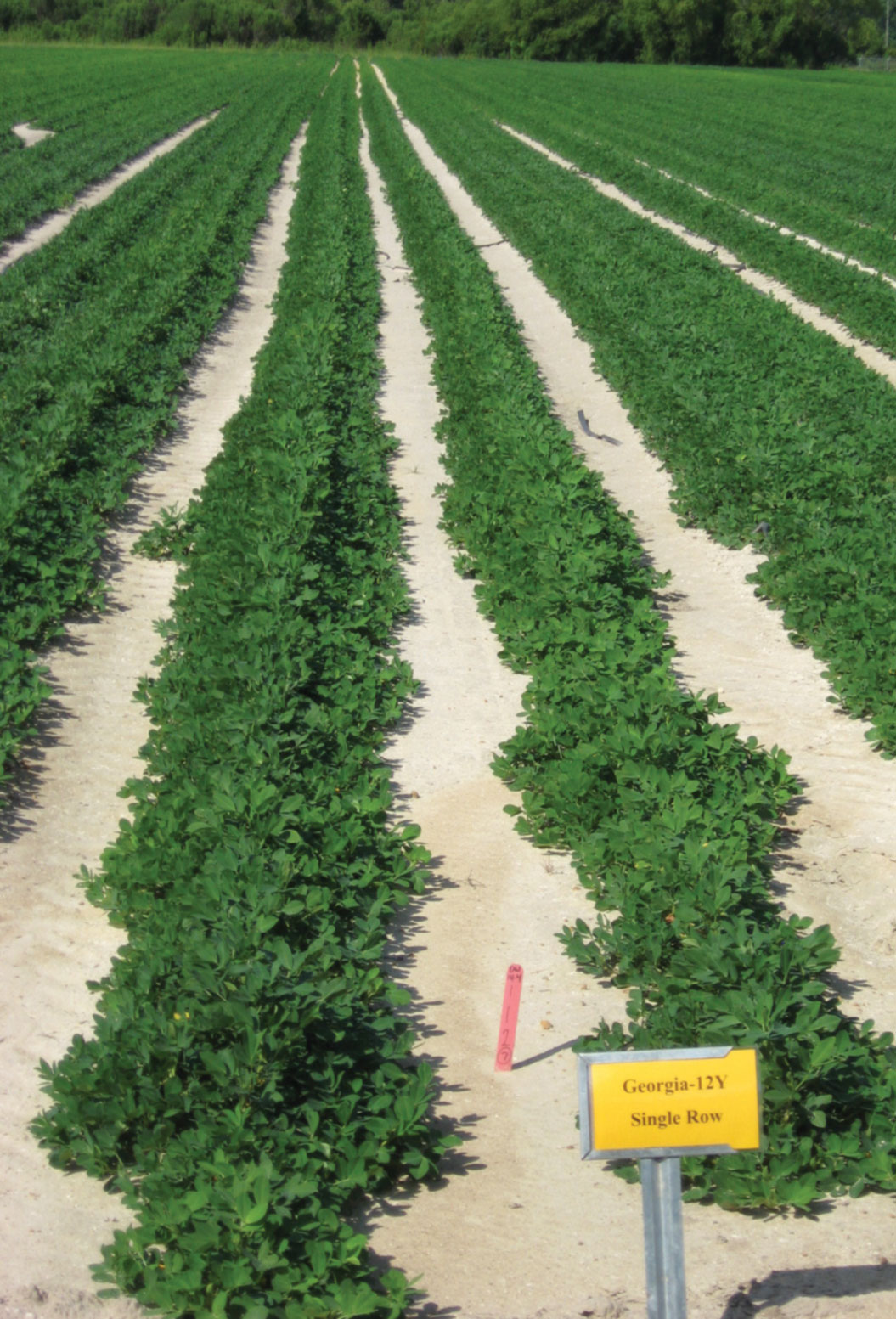 It appears there will be an increase in peanut acres throughout the Southwest, including areas with a limited history of production. Several factors must be considered when preparing fields that have not recently been planted to peanuts. Following proper land preparation and weed management, planting should begin when there is adequate soil moisture and temperatures are favorable. Nitrogen requirement for peanut is generally high, but they typically get the majority from nitrogen-fixing bacteria (Bradyrhizobium spp. ). These inoculants must be applied in-furrow at-planting. Although successful nodulation is expected, early season scouting at four to six weeks after planting is advised to assess nodulation in advance of making decisions for in-season fertilizer applications. It is important to remember that over fertilization can negatively affect nodulation and possibly increase the severity of pod rot later in the season. Incorporating peanut into a cotton cropping system provides several advantages. In addition to yield benefits resulting from residual nitrogen, growing peanuts also allows producers to utilize additional herbicide modes of action to combat glyphosate-resistant pigweed populations. Furthermore, rotating to peanut in fields infested with the cotton root-knot nematode (Meloidogyne incognita ) will serve to reduce populations, minimizing damage to cotton in subsequent years. In order to maintain a profitable peanut production system, peanut should only be planted in the same field one year out of every three to four years.

By now, plantings in the Virginia-Carolina region are only a month away. Getting peanuts planted sometime in May will generally result in similar yields. However, yield from late April/early May and late May/early June plantings can be less consistent than mid-May plantings. While you can’t get them all planted in a day, trying to hit the sweet spot during the middle of the month is the best approach.

Regardless of when you plant in this window, production and pest management practices needed to optimize yield will vary little. Keep in mind that even when you spread out planting dates, laterplanted peanuts often catch up by the end of the season.

About 20 percent of growers in the V-C region plant peanut in reduced tillage. For those in this camp, applying burndown herbicides in April for difficult-to-control weeds is important. 2,4-D is an excellent option during April for glyphosate-resistant horseweed and other weeds such as primrose. Getting these sprays out before tobacco is transplanted and cotton begins to emerge is important to minimize issues with off-site movement. For horseweed, applying residual herbicides in late April can help keep fields clean when peanuts emerge, and having multiple applications of residual herbicides increases the likelihood that at least one of the applications will be activated by rain.

Weather is unpredictable, and as you prepare for planting, make sure you have insurance in place. By insurance I mean adequate protection from thrips and weeds in case field operations are delayed. It is critical to start with clean fields and healthy plants. “Know Your Risk” was a common theme at the peanut production meetings earlier this year and will remain an important topic for most of the 2015 growing season. A 20 to 25 percent increase in acreage in Georgia will stress current rotation intervals to the point where growers will likely experience elevated disease incidence causing growers to spend more on fungicides. Peanut needs a minimum three-year rotation to maintain maximum yield and reduced pest incidence.

An increase in acreage will also entice growers to plant more acres in middle to late April. Environmental conditions in April have never been consistent and can change in a matter of days. Unforeseen cool and wet conditions can cause delayed germination and an increase seedling disease and seed rot. The current four-inch soil temperature recommendation is 68° F for three consecutive days with no cold front predicted for the next five days. Along with potential problems with plant stands, incidence of TSWV has been shown to be higher in early planted peanuts. Although TSWV incidence has been very low in recent years, it has started to increase and does not need to be ignored.

Where Do New Varieties Fit In?

Warm weather in April can really get us thinking about planting season. Just a few things to keep in mind before you plant. First, we have updated the soil temperature requirement: The soil temperature should be 68 degrees at the four-inch depth for three consecutive days now instead of 65 degrees with a clear forecast for the next five days. This should increase the percent germination over the previous recommendation by allowing the soil to be warmer. Therefore, if you plan to plant in April, make sure that the temperature is at the recommended level with a good forecast to avoid a reduced stand and increased chances of TSWV. Even though TSWV has been minimal in recent years, we should not abandon good cultural practices. Last year, fields with skippy stands because of seed issues and cool weather had more TSWV than we had seen in quite some time.

Now, I’ll make a few comments on varieties and where they may fit into your operation. Last year was heavy for white mold, and Georgia 07W performed very well because of its resistance to the disease. However, seed supply will be very limited for this variety in 2015. Therefore, we recommend several other strategies that should reduce your white mold pressure. First, consider planting your most heavily invested fields in mid-May. Secondly, Georgia12Y has good white mold resistance and could be used in the earlier planting window. Lastly, twin-row patterns reduce the incidence of white mold because it does not allow the disease to run down the row because plants are spaced further apart than in single rows. Each year, I conduct a row-spacing variety test to look at the latest varieties as affected by row spacing. Last year, the only varieties that didn’t get a yield increase in a twin-row pattern were Georgia 12 Y and TUFRunnuner ‘727’ leading us to conclude that they would be your best single-row variety choices. Finally, the new variety TUFRunnier ‘511’ showed high yield potential but was weak on leaf spot. Keep this variety on land with a good rotation or in close proximity to your main operation so you can keep it on a good spray schedule.