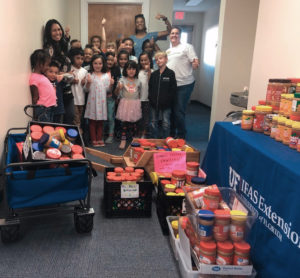 Spread the word, and the peanut butter! The Peanut Butter Challenge, an annual jar collection that launched in the Florida Panhandle in 2012, is expanding statewide in the wake of Hurricane Sally.

Coordinated by University of Florida/Institute of Food and Agricultural Science Extension faculty and volunteers, the project was conceived as a way to feed hungry families ahead of the holidays in addition to promoting a Florida-grown crop. The peanut, which is produced mainly throughout the northern regions of the state, contributed $154 million to the state economy in 2017, according to the Florida Agricultural Statistics Service.

The challenge always runs from Oct. 1 through the day before Thanksgiving – Nov. 25 this year – collecting unopened jars of peanut butter. During this period, drop off jars at your local UF/IFAS Extension county office. All offices are abiding by mask and social distancing guidelines for your safety, but contact your office ahead of time for any questions or concerns.

Peanut butter is an ever-popular item in food pantries for its nutrient density and shelf stability. The project took on new meaning this year as demand for food bank assistance had increased as an economic effect of the COVID-19 pandemic.

This year’s challenge was already planned to expand to more of the state’s peanut-producing region with the addition of the northeastern counties for the first time. Now, counties in Central and South Florida are also invited to join in the event.

After Hurricane Sally made landfall Sept. 16, affecting much of the Panhandle, UF/IFAS Extension offices around the state sought a way to help. In joining the Peanut Butter Challenge, statewide participation will support communities locally as well as those recovering from Hurricane Sally.

In addition to the community donations, the Florida Peanut Producers Association and Florida Peanut Federation also contribute to the collection effort. At the end of the challenge, the organizations’ donated jars are distributed to participating counties’ food pantries, proportional to the amount each county collects. This year, to help the Hurricane Sally-affected areas, other counties will contribute to the totals in the Northwest counties to increase their match potential.

“Many of our Extension offices will also serve as polling places during this time period,” Johnson adds, “so we encourage those who are able to bring along a jar of peanut butter when you go to vote.

The University of Florida contributed this article.