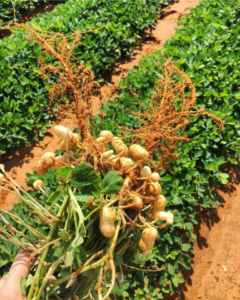 Dr. Emi Kimura, AgriLife Extension agronomist and state peanut specialist, Vernon, said peanut acres were up, but that she expected yields to be down due to drought conditions.

A few producers might have started digging their fields, Kimura said, and some will begin next week in the Rolling Plains and West Texas. Digging will ramp up over the next few weeks, and producers will be busy through mid-October.

The season began with planting in the northern Rolling Plains and West Texas in the first week of May and in West Texas and a little later for Central and South Texas, she said.

Cold snaps in April slowed germination in the Rolling Plains but followed with plenty of heat units, Kimura said. But there was not enough rain to keep up with plants’ water demands despite irrigation.

“It was so dry in West Texas in July and August that irrigation couldn’t keep up with plants’ demand,” Kimura said. “Conditions in Central and South Texas and the Rolling Plains were not as dry as the west, and the overall effects of drought are difficult to estimate at this point.”

Kimura said temperatures were cooler than normal during September, which also likely slowed the crop’s progress some, and that frost in the windrows before late October could be trouble.

Kimura said drought was the factor that contributed to the yield reduction most because there was below-average pest and disease pressure this year.

There were reports of crown rot and leaf spot, but damages were not significant, likely due to proactive spraying. There were also reports of pod rot, but the extent of damage won’t be known until peanuts are harvested.

Kimura said peanut producers will need to time their harvest well to maximize pound-per-acre yields. Producers are advised to check peanut maturity by digging samples in several locations around their field to determine when to harvest.

“They need to target the right timing to have the pods intact and attached to the vine and minimize immature pods,” she said. “It’s one of the hardest decisions to make as a producer.”