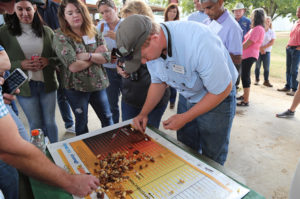 Since much of south Georgia has experienced little to no rainfall in the past month and even less is expected over the next few weeks, Monfort is encouraging farmers to move forward with digging their crops.

“We’re still not going to have rain for another month, maybe three weeks. To me, if you’ve got a crop right now, you probably want to get it,” Monfort said. “If your crop is wilting during the day time and not recovering at night, and you don’t have any moisture at all, then I’d probably get it.”

To determine if their crop is mature enough for digging, peanut farmers sample about five areas in the field to acquire a total of 200 peanuts for the maturity analysis. Monfort said dryland producers experienced “split crops” early in this year’s harvest season based on the maturity profile board analysis.

A “split crop” refers to a sample of peanuts where approximately half of the peanuts are near maturity while the other half is very immature. This happens when the peanut plants experience hot, dry temperatures, which typically occurs in dryland fields, or fields without access to irrigation.

Lack of rainfall and extremely hot conditions cause a disruption in the blooming and/or pod set for a period of time.

Then farmers face a tough decision; how do they proceed? With half of their sample close to maturity and half that is not, should a grower risk the peanut pods that are ready with hopes that the rest will eventually mature?

“What farmers have to start doing there is determining, ‘Where’s my money?’ Do they have enough in that front group that’s mature enough to say, ‘That’s my crop’? If those peanuts are good quality, most of the time I would suggest that the farmer go ahead and dig to grab those,” Monfort said. “Especially since the forecast is not calling for much, if any, rain in the near future. It’s too big of a risk to think those immature peanuts will mature up at some point. There’s no guarantee whatsoever. We can make a choice but it’s a hard one. The later it gets, the more risky it gets.”

One positive outcome of the recent dry weather is that it has created perfect conditions for farmers who are in the process of harvesting their peanuts. Peanuts in irrigated fields are drying very quickly after being dug out of the ground. According to Monfort, it usually takes five to seven days for peanuts to dry. That has been reduced to three to four days.

He estimates that 15% to 20% of this year’s crop has already been harvested.