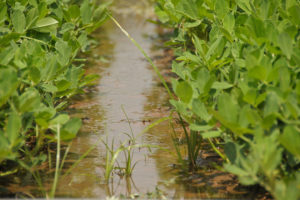 Peanuts are one of many crops that should benefit from an $860,000 USDA grant funding new irrigation studies by agricultural researchers at OSU and cooperating universities — photo by Todd Johnson, OSU Agricultural Communications Services

Flood irrigation has been a common agricultural practice for 5,000 years, but an Oklahoma State University researcher contends producers who use it can still benefit from enhancements that maximize limited water resources.

“Surface or gravity flood irrigation is used in nearly one-third of irrigated acres in the United States, so continuing to provide producers with new advances is essential to water conservation efforts,” said Saleh Taghvaeian, an assistant professor and water resources specialist with the university’s Division of Agricultural Sciences and Natural Resources.

Taghvaeian and cooperating scientists at OSU, Mississippi State University, Utah State University and the University of California will be evaluating and instilling new technologies in flood irrigation for the next two years, thanks to a U.S. Department of Agriculture grant of more than $860,000.

“While a number of producers take advantage of more advanced technologies that make irrigation scheduling easier, such as sprinkler and drip systems, flood irrigation still accounts for about 43% of total irrigation water applications in the United States,” said Taghvaeian, who is serving as the study’s principal investigator.

However, only 10% of federal financial assistance for irrigation best management practices has been dedicated to flood irrigation, underscoring the importance of the study as a tool to help agricultural producers and promote environmental stewardship.

Taghvaeian said the characteristics of flood systems in the four collaborating states allow for identification and evaluation of technologies that can be adopted in other parts of the United States, and certain regions worldwide.

“This study is an example of innovative research that will take an old technology of flood irrigation and improve the efficiency and water use to meet current agricultural needs,” said Keith Owens, associate vice president of the statewide Oklahoma Agricultural Experiment Station system, the division’s official research arm. “Agricultural producers are very interested in conserving resources and take responsibilities as stewards of the land very seriously.”

According to the nonprofit World Bank, irrigated agriculture represents 20% of the Earth’s total cultivated land, but it contributes 40% of the total food produced worldwide. It is estimated that agricultural production will need to expand 70% by 2050, when the world population is projected to surpass 10 billion people.