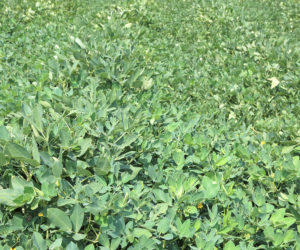 While some fields are just a few weeks away from harvest, Monfort cautions growers about applying additional fungicides or insecticides, especially if there’s little to no rain in the forecast, to aid in the crop’s late-season growth.

“We need to assess what our crop situation is and see what’s out there so we can figure out what the best course of action is as we get closer to harvest,” he said.

It is crucial for peanut growers to physically get into their fields and closely assess their crop.

“If they’re not taking a look and they’re not paying close attention, they’re either going to lose what they’ve got or they’re going to put more money into it than what they need to,” he said.

Half Of State’s Acreage Is Dryland

Monfort estimates that Georgia’s peanut crop hasn’t been this dry this late in the growing season since 2014. Since approximately half of the state’s crop is planted in dryland fields, or fields without irrigation, yields this year are expected to drop.

“We should see a drop in the state average as a whole, but how much is hard to say,” Monfort said. “One positive is that our irrigated crop looks pretty good right now.”

Georgia’s drought conditions are largely concentrated in the middle and southern portions of the state, according to the U.S. Drought Monitor.