Ten years ago, I stood in a peanut field planted in late April surveying significant damage from spotted wilt. One year later in 2010 and for the next eight years, spotted wilt would not make a significant presence across the Southeastern Peanut Belt.

In fact, some claimed that it had “disappeared.” What a difference a year makes. For spotted wilt, 2019 marks a return to prominence. Why? Why would the disease nearly disappear for nine years and return with such vengeance?

First, let me correct the myth. It did not disappear from 2010 to 2018. Research during that time-period consistently found the pathogen for tomato spotted wilt virus (TSWV) in 50% to 80% of the plants tested. So the pathogen was present, but the disease symptoms were minimal.

However, for all practical purposes, without symptoms, there was little worry about spotted wilt. We may never know all the factors that lead to the 2010 retreat of spotted wilt nor its 2019 resurgence.

But here are a few potential culprits: planting more peanuts in April and early May, less use of phorate or Thimet, poor stands caused by less than optimal seed vigor and dry conditions. All three of these factors increase the risk of spotted wilt in peanut.

Regardless of the cause, what can we do about it? That’s the question we need to be asking. Nothing this year, because the control measures for spotted wilt in 2019 are over, complete, kaput, done, finished.

That’s because ALL control of spotted wilt is done before, or at the time of, planting. As the old saying goes, “An ounce of prevention is worth a pound of cure”, and nothing could be more true in the case of minimizing risk of spotted wilt. So then, what can we do before planting again in 2020? 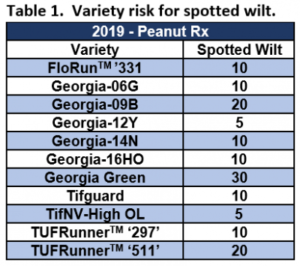 There is no “silver bullet” to eliminate or even minimize risk of spotted wilt, but there are a lot of small bullets that have been shown to reduce risk.

These include a mid-May planting date, variety selection, good plant stand, use of phorate (Thimet), use of twin rows, reduced tillage and avoiding the use of Classic herbicide.

Each of these seven factors are given points, assigned based on our best research. The lower the point total, the lower the risk of disease. Table 1 (left) shows the risk points for peanut varieties.

Most of our current varieties have 10 points, two have 5 points, and two have 20 points. By comparison, Georgia Green had 30 points, and we considered it to be moderately tolerant.

So varieties today have much better tolerance, but they are not totally resistant, and are not without risk, when other risk factors are high. Table 2 (below) shows the point totals for each of these factors and some scenarios to consider. 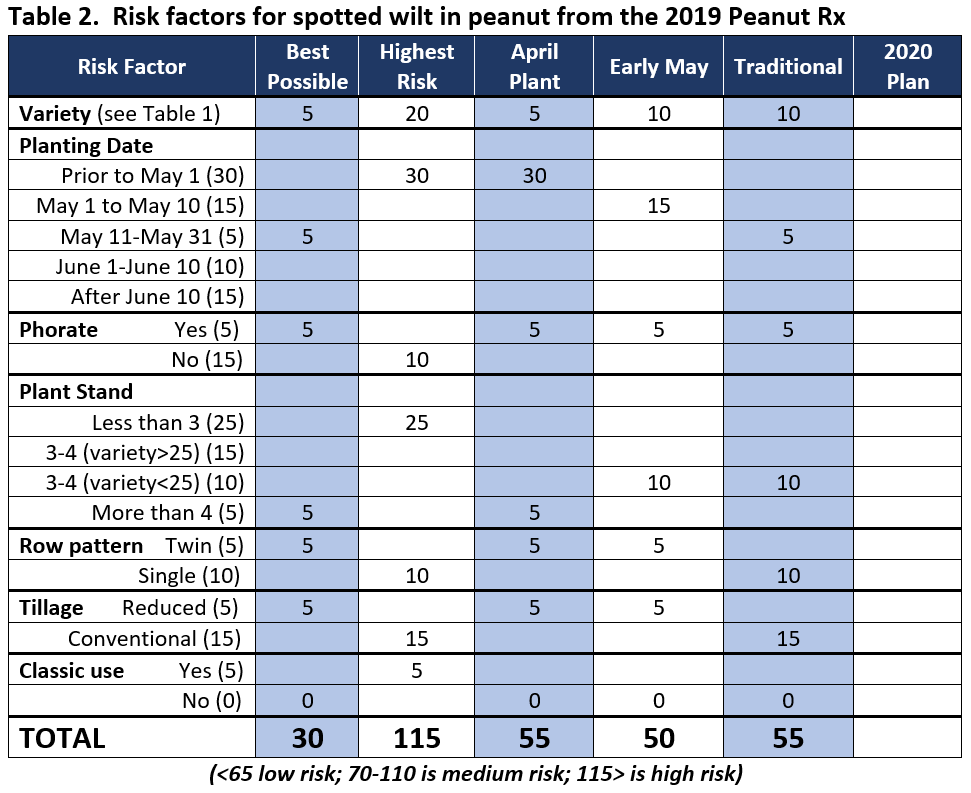 In Table 2 above, the scenario in the first column is the best possible scenario we have at this point – doing everything possible to minimize risk of spotted wilt. The second column is the scenario in which the highest risk for each factor is present. This could have been labeled “Don’t Do It!” The next three columns represent some typical scenarios that would accommodate a wide range of planting dates and still minimize risk with less than 65 points in total. Be aware that planting prior to May 1 is risky and if that is required, you should be prepared to minimize all other risk factors. The final column is blank so that you can calculate your risk for a given field for 2020.

Dr. Barry Tillman is a professor based at the North Florida Research and Extension Center in Marianna. He may be reached at btillman@ufl.edu.

Taking A Shot At TSWV