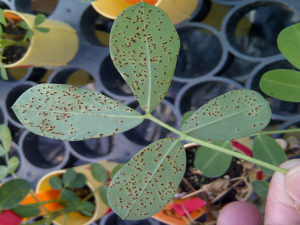 Peanut rust was discovered in Tift County in August and has UGA plant pathologists concerned heading into the final month of the growing season. Peanut rust is a dangerous disease because of how easily and rapidly it spreads from one plant to another — photo courtesy University of Georgia

Georgia farmers need to be wary of peanut rust disease after it was discovered in a field in Tift County last week, according to University of Georgia plant pathologist Albert Culbreath.

He said that rust doesn’t occur in Georgia every year and information about which chemical options are best for controlling this disease is limited.

Several fungicides that are already being used for leaf spot and white mold diseases, especially some of the mixtures, may treat rust effectively. However, growers may need to spray more frequently for rust than for leaf spot.

Culbreath cautioned that growers who are using the new leaf spot fungicide Miravis will need to make sure it is combined with a fungicide that has rust activity if rust is present in the field.

The presence of peanut rust is a huge concern for farmers because it can easily spread from one plant to another and the inoculum can move very quickly in rainy or windy conditions. The frequent thunderstorms that have been occurring lately in some areas can help spread inoculum and help the disease to develop rapidly.

“It pretty much shuts down the leaf in terms of photosynthesis and eventually damages it so badly that the leaf will turn black and die,” Culbreath said. “One difference between peanut rust and leaf spot is that leaf spot will cause the plant to defoliate. With rust, the leaf will die and hang on to the plant. You’ll lose the leaf either way but if that leaf is still hanging on the plant, the inoculum can still move from one plant to another more easily than if it’s just on the ground.”

Since the inoculum does not overwinter in south Georgia, Culbreath says he believes it may have been blown into the region by a storm in June. The disease is visible by its reddish brown pustules on the bottom side of the leaf. Its rusty color is how it got its name.

“The main thing is that growers need to be on the lookout for it,” Culbreath said. “Leaf spot is explosive, but rust is super explosive. It can increase rapidly once it gets started and it’s early in the season for us to be seeing it.”

He said that UGA Cooperative Extension agents can help growers determine which fungicides will be best for specific situations.